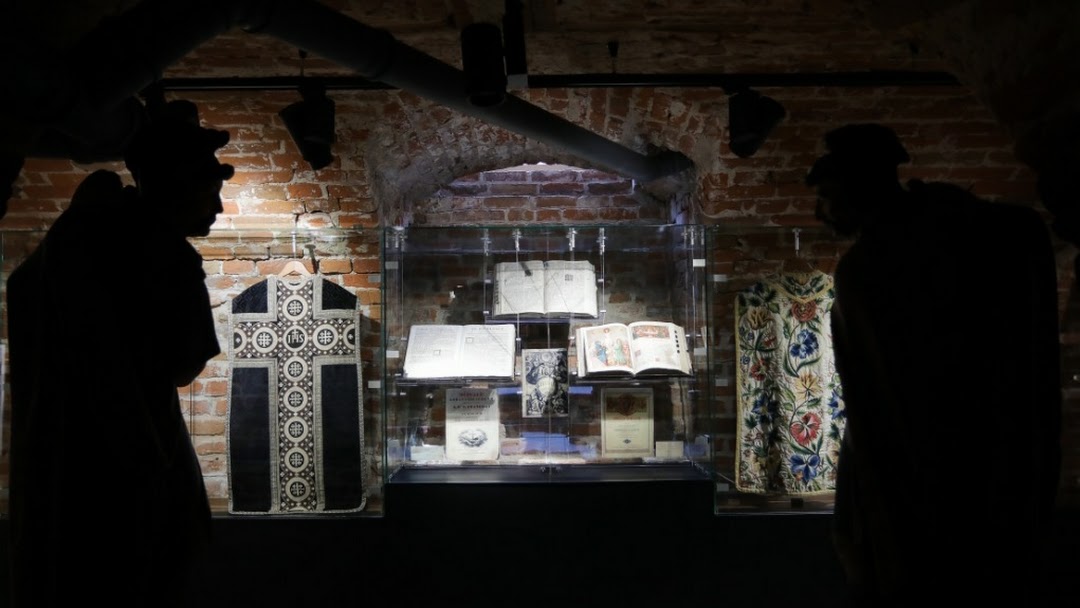 Former Węgrów was a parish town for Lutherans from Warsaw (for 130 years!), Arians had a printing house famous all over Europe and gathered for synods, Jews produced Torah, and merchants from Gdańsk had their trading post. In short, a few centuries ago it was the brightest – multinational and multi religious – Commonwealth in a nutshell.

The town was established on the border of Western and Eastern Europe, on important trade routes, where Polish, Ruthenian and Lithuanian influences clashed several centuries ago, and in which Poles, Germans, Jews and…. Scots, Christians of Potestant denominations, Catholics, Orthodox Christians, and also believers lived Judaism. Today, most of them only have stories….

Peaceful coexistence was possible, although, of course, no paradise on Earth was created here, as evidence by the history of the parish church of Blessed Virgin Mary, today a beautiful baroque temple on the eastern side of the Market Square, built in the 15th century as a wooden church, and later a gothic one.

The fate of the parishioner in a private town that changed owners from time to time was variable and not always rosy. In the 16th century, the Catholic church was handed over by Anna Radziwiłł to the Calvinist congregation, the next owner of Węgrów, the Lithuanin magnate Jan Kiszka handed it over to the Polish brothers, i.e. the Arians, and Prince Krzysztof „Piorun” Radziwiłł, after taking over the estate, expelled the Arians and re – introduced the followers to the church Calvinism. Several dozen years later, his successor Krzysztof II Radziwiłł returned the temple to Catholics. It has been 70 yeas and the church….burned down completely, and then it was reborn as a beautiful baroque basilica thanks to the foundation of Jan Dobrogost Krasiński.

Thanks to the efforts of Radziwiłł not mentioned here – Bogusław, known to fans of Sienkiewicz’s „Trilogy” as a thief over the thieves – Scottish craftsmen (thanks to them, the Węgrów inhabitants became famous as the city of weavers) and German, who created their own Protestant district. To this day, there are two churches and a Protestant cemetery in Węgrów. Most of the 17th century and the first half of the 18th century were a good time for Calvinists and Lutherans. The Warsaw Lutherans had to go 80 km to the parish church – to Węgrów!

The Krasiński family, the then owners of the city, headed by Jan Dobrogost, looked after all the inhabitants. When the Krasiński family ran out, and their heirs began to fight for their property, the balance also ran out in Węgrów and the harassment of „strangers” began speaking a different language. Following slightly different traditions and professing a different faith. Scots left Węgrów in the middle of the 18th century, and the weaving tradition returned to the town almost three centuries later, when Zofia Tomrle, an expert in folk art, settled here. But there is a completely different story.

Orthodox Church in the Catholic Monastery

The building of the former monastery of the Reformed Fathers, another of the Baroque miracles that the inhabitants of Węgrów owe to Jan Dobrogost Krasiński, is the second temple, after the parish church, to have an „ecumenical” episode: after the January Uprising, when Russian soldiers and officials were stationed here, in one of the monsterdy Orthodox church was arranged in the premises. Outside, the characteristic domes placed on the roof informed about the existence of this temple. They were removed after the Russians left.

The first Jews settled in Węgrów in the 16th century. Several dozen years later, the Płock voivode and the owner of the city gave permission for them to settle here without restrictions. It was then that the first synagogue, called Kazimierzowska, was built. Another one was built in the 19th century. In 1921, more than 5000 Jews lived in Węgrów (approx. 50% of the population), apart from two synagogues, there was a religious school and ritual bathhouse, and the city was famous for producing the Torah. World War II brought about the extermination of not only the Jewish community, but also destroyed most of the traces of their centuries – old history in Węgrów. To this day, only the house of the last rabbi of Węgrów and the remains of tombstones from the Jewish cemetery, placed in the lapidarium monument, have remained. And a story about those who once contributed to a multinational, multi-religious, multicultural community.

The first mention of the town of Węgrów comes from 1414. The stories of sice centuries of a town lying at the intersection of two great trade routes – from Warsaw to Vilnius and from Gdańsk to Lviv o were collected and placed in the vicinity of ….the final resting place of Jan Dobrogost Krasiński. The ornate sarcophagus with the early remains of one of the city’s greatest benefactors is located in the basement of the church St. Peter of Alcantara and St. Anthony of Padua. Many more people related to Węgrów are buried under the floor of the Baroque temple – there are 60 coffins with mummified remains in the crypts.

The basement of the former monastery of the Reformed Fathers is adjacent to the church necropolis, It is there that the Węgrów Museum was established with a modern narrative about the multicultural history of the city. The exhibition has been divided into five parts. Each of them is assigned a mood – setting sound illustration. Built of bricks, semicircular vaults, long corridors, shallow niches and small rooms are an inseparable part of the stories about the history of the city and its inhabitants. In addition to exhibits such as costumes, books, everyday objects or, for example, a traveling altar (perhaps belonging to Jan Dobrogost Krasiński), the narrative is complemented by photos, descriptions, maps and multimedia projections.

The city was a kind of phenomenon in the national arena, and even in 17th century Europe. The museum exhibition „Węgrów – a city of many cultures and religions” is an attempt to show that despite different religions and cultural heritage, we can live together, build common good and create social life. Differences do not always have to divide, but can sometimes become an enriching element.

The scenario of the exhibition, which is available to viewers from March 28, 2019 was developed by historians Michał Gochna, Radosław Jóźwiak, Roman Postek and dr. Grzegorz Ryżewski. The entire project was supervised

by the custodian of the parish of St. Peter of Alcantara and Antoni from Padua in Węgrów and Dr Marek Sobisz

It can be chilly in the crypts, so even on hot days it is worth taking a warm sweater or a scarf on a tour of the museum.

The museum exhibition can be visited during the following hours: