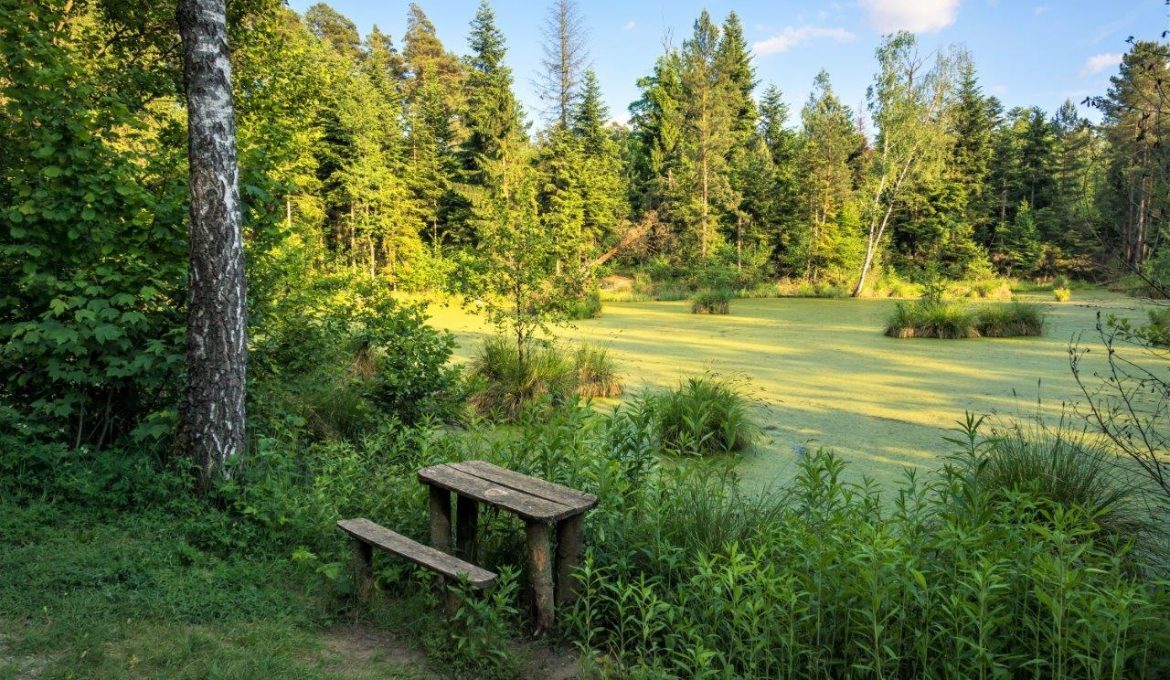 Here is a real forest, wild and defiant. It is it that most closely resembles the ancient forest, visited by Polish kings hunting for big game, and remains the largest forest concentration in the south of the Masovian Voivodeship, The Kozienicka Forest is a remnant of the ancien Radom Forest. It is situated between Radom and the Vistula, and actually between Radom and Kozienice. In the 16th century, the town of Jedlnia was the focal point of the area, so until the 19th century these forests were called the Jedleńska Forest. The wilderness of the forest is protected by the Kozienice Landscape Park with several nature reserves. This is a unique area with a specific microclimate: a bit warmer (half a degree) and more humid than the areas outside its borders. This means a longer growing season and vegetation that is ascent elsewhere in the province, such as fir, beech, hornbeam and mountain elm.

The most numerous animals in this area are fallow deer, deer, elk and roe deer, as well as wild boars and foxes, and badgers, martens and weasels are slightly more rare. The humid forest areas also take a liking to reptiles and amphibians of various species, incl. pond turtles, rare in Poland, live here. It is a fantastic place for trips for lovers of forest hikes and knowledge about the world of nature: 9 hiking and 17 bicycle routes allow you to penetrate the forest areas that King Władysław Jagiełło once liked so much that the ordered to build a hunting manor in Jedlnia and in a place that thanks to him was called Kozienice.

It was said that King Jagiełło came to the forest to hunt, saw a deer, took aim and shot. But he missed disgracefully.

Fortunately, the king had enough distance to himself to accept the defeat with humor, and to name the place where he missed Kozienice. If you look at the history of other forests in the masovian Voivodeship, you can see that the legends associated with them tell about Masovian dukes or bishops of Płock. The Kozienicka Primeval Forest, however, like Radom and Kozienice, is a historical Małopolska, so stories about Polish rulers sitting on the throne in Kraków are ruled here.

These are not legends, but also true and well – documented stories, such as the arrival of King Kazmierz Jagiellończyk to the hunting manor in Kozienice, where he took refuge on November 8, 1466, together with his wife and court, from the plague in Kraków. And it was in this manor house, on January 1. In 1467, Prince Zygmunt was born, who later reigned with Italian Bona at his side and is remembered as Sigismund I the Old.

However, let us go back to Jagiełło, who started the dynasty that ended with the son of Sigismund the Old, because the legend of the naming of one of the most beautiful places in the Masovian Voivodeship is associated with him. It is worth adding that it was not only games that attracted Jagiełło to the forest in which he once missed. This is where the raffs connecting Kraków and Vilnius ran.

The hunting must have given the king a lot of joy, since he would often go out into the wilderness alone. One day, after many hours of horseback riding, he suddenly felt how thirsty he was. The day was beautiful, sunny and warm. And there, as to the spite of any of the companions, with a water bag at hand. Where to look for a stream? The king stopped his horse and listened to the sounds of the forest.

But instead of a murmur of water, he heard a twig snap, then the sound of light footsteps. He rode closer and saw the young man walking through the forest. The boy lived in a nearby settlement, he knew the area well and led the king to the nearest spring, which is still called the Royal Spring to this day. But that is not the end of the story. When Jagiełlo quenched his thirst, he asked the young man how he could repay him.

– Could he, my lord, – asked the embarrassed young man – intercede for me with my beloved’s father? We love each other very much, but her father does not want her to marry a poor man like me.

The king fulfilled the young man’s request, and gave him a purse full of gold, which was a real treasure for the forest and immediately changed the material status, so the girl’s father not only did not dare to be young on the way to happiness, but he blessed them with joy. And the spring by the Zagożdżonka river, or actually the entire group of springs, is still called the Royal Spring, Although there are also those who call in the Source of Love, because apparently it is enough to let a loved one drink from it to ensure mutual love. These are the stories about the Kozienice Forest that circulate in the forests between Radom and the Vistula. Are they real? Hard to say. One thing is certain: if you visit the Royal Spring, you will fall in love with it.