Home ⁄ MUST SEE ⁄ THE ROYAL CASTLE IN WARSAW 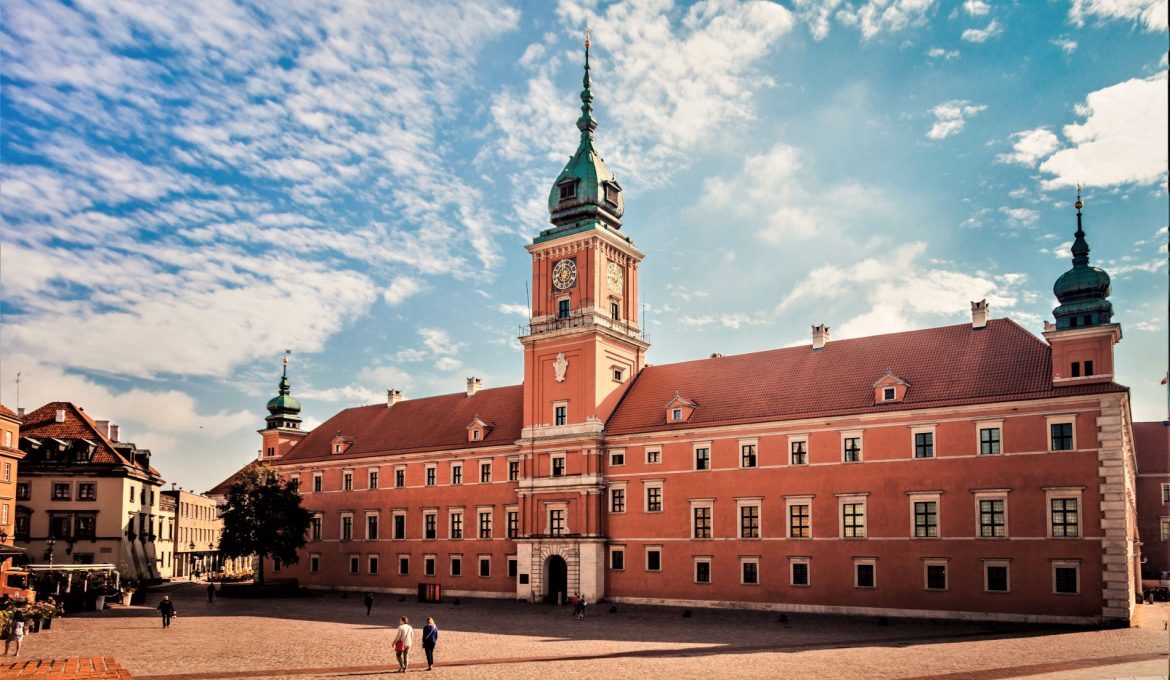 The Royal Castle in Warsaw

It was here that the first modern Basic Law in Europe and the second in the world was adopted in 1791, called the Constitution of May 3, from the date on which it was established by the Four – Year Seym.

From autumn to spring, the revelers of Thursday Dinners also met here. The dishes served for Thursday Dinners, prepared by Chef Tremo, initiated the fashion for a lighter Polish diet mixed with the French cuisine.

The residence of the Polish rulers razed to the ground in September 1944 waited several years for reconstruction, finally completed with the opening of the Upper Royal Garden in  2019.

Probably the one who founded the prince’s seat on the site of today’s Royal Castle in Warsaw was prince Bolesław II, but the castellany of Warsaw was most likely established only under prince Trojden.

Traces of the first seat with wooden fortifications were found during archaeological research conducted from 2004 to 2008.

The oldest brick castle building was the Grodzka Tower, preserved to this day in the basement and ground floor parts. The Gothic cellars, that survived destruction of the castle by the Germans in September 1944, are also remembering the dukes’ reign. The cellars, where museum classes for students are held today, are part of the ducal palace of Curia Maior, built in the first years of the 15th century by Duke Janusz the Elder. It was a rectangular brick structure, the south – eastern corner that rose over a huge escarpment. The western facade was decorated with shallow pointed rocesses ended with ornaments.

It is thanks to Janusz the Elder, that Warsaw was surrounded by the brick defensive walls. Their full length – along Podwale and Mostowa streets and the Vistula escarpment was approx. 1200 m. Only three cities in Mazovia were surrounded by walls: Warsaw, Płock and Pułtusk.

In August 1526, after the death of the last Masovian dukes, when King Sigismund I the Old came to Warsaw, the Warsaw Castle was named the Royal Castle. Soon it became the seat of not only a monarch, but also a parliamentary one, because it was here that the bicameral Seym of the first Republic of Poland met, including the most famous Four Year Seym, that passed the Constitution of May 3.

The Reign of Stanisław August Poniatowski was exceptionally kind to the Royal castle: there were as many as 11 projects for the reconstruction of the royal palace! It was here from autumn to spring, because in summer it took place in Łazienki Królewskie, where the famous Thursday Dinners were held. It was not only culinary, but above all intellectual and artistic  feasts.

But when, during dinner, good wine and social intimacy made the minds of the present enchanted, a cheerful mood overwhelmed the whole group and then the jokes flowed in streams. Apart from Fr. Naruszewicz and Trębecki, the most frequent visitors to the castle on Thursdays were: Jan Albertrandy, historian and linguist, Franciszek Zabłocki, comedy writer, Ksawery Wojna, the Polish diplomat, priest Franciszek Bohomolec, historian and comedy writer, scholar and historian of the country, Ignacy Potocki, Karol Wyrwicz, author of the first geography political science, scholars: Wybicki and Feliks Łojko. There was also Kazimierz Ustrzycki, a gifted and educated nobleman from Galicia, and several other landowners dealing with science and literature. The Thursday table was round, for 10 to 12 people, with no older or younger seats. The king ordered  Naruszewicz’s bust to be placed in the hall of the Warsaw castle, in the dining area.

It was the respected royal chef Paweł Tremo of French origin, born near Berlin, in charge of food at the time. Dinners were a combination of Polish and French cuisine, primarily due to the delicate stomach of King Stanisław August, for whom the Polish cuisine was too fat and rich in thick sauces. He  found it too heavy. In the cookbook of Paweł Tremo, that survived to this day „Learning the exact methods of brewing and preparing dishes from meat, fish, vegetables, flour, as well as seasoning various sauces, making punch essence” are among other recipes for soups (sorrel, clear and whitened borscht, broths),vegetables (young and old carrots, kale with chestnuts, fresh sorrel and golden turnips?). Wine served in the royal dining room was made from grapes grown in the castle grounds.

The beginning of the 19th century was marked by great events in the history of the castle. Napoleon Bonaparte stayed here twice, and it was also here that he made the decision to establish the Duchy of Warsaw in 1807. Several years later the Kubicki Arkady was built on the eastern side of the former royal seat.

During the August rebellion in 1831, the people of Warsaw dragged those accused of espionage and treason out of the castle prison and lynched  them by hanging the suspects on lanterns. Several lynch men were shot by the military. This is how the November Uprising ended, after which the castle was taken over by the Russian administration, and in 1836 the tsarist governor Iwan Paskiewicz settled in the seat of the Polish monarchs.

The German governor – general did not have time to stay at the Castle. He moved in the summer of 1915, when the Russians and the front were forced to the east by the German army, and already in 1918 he had to hurry out. After 1919, the Royal Castle briefly became the home of, among others, for the Chief of State, Józef Piłsudski and the writer Stefan Żeromski, and in 1926 it became the residence of the President of the Republic of Poland.

Bombed during German air raids in 1939 and completely destroyed in September 1944, it had to wait a long time for reconstruction, although it is worth remembering about the archaeological works carried out in the castle in the meantime (more information, including the latest research results, on the website of the Castle).