Home ⁄ MUST SEE ⁄ VISTULA BOULEVARDS. THE BIGGEST CLUB IN WARSAW 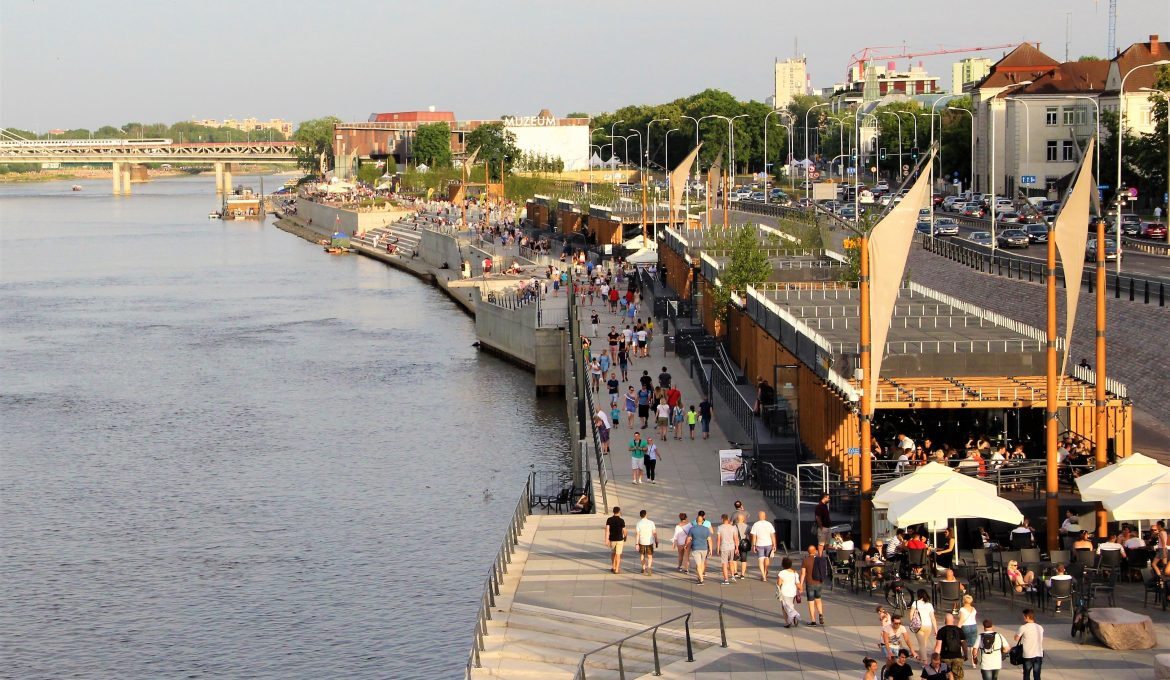 This Is where lovers, old buddies and best friends meet. Cyclists and skaters use designated paths, and skaters from a special park at the Świętokrzyski Bridge. Musicians meet here at evening pits, poets and poets – slam under bridges, and everyone takes a selfie with the Mermaid. It is a place for walks and artistic actions, concerts, tournaments, competitions and meetings of chess players. Vistula Boulevards in Warsaw – the city’s largest club, community center and gymnasium with lots of restaurants, seats and a view from 2020 also – a huge flower meadow. Warsaw Boulevards go along the left bank of the Vistula River from Cape Czerniakowski to the Żoliborz Beach located at the lever of Klub Spójnia. Established quite late for an European capital located on the large river, they developed gradually along the river and still at the end of the 20th century did not enjoy much interest of residents and tourists. The polluted river, the lack of infrastructure, and most of all the difficult and dangerous access to concrete steps along the Vistula, built in the 1970s, effectively deterred enthusiasts of outdoor relaxation.

But in the first decade of the 21st century, the Multimedia Fountain Park was built in Podzamcze, the Copernicus Science Center was built on the Vistula River, and a tunnel was built to allow safe passage from owiśle to the waterfront. And the great repairs and reconstruction of the boulevards began.

Thanks to this, today we have five sections of the Vistula Boulevards separated by bridge, and each of them has its patron and its own character.

Zbigniew Religa Boulevard – from the Żoliborz beach to the Gdański Bridge.

A walk along the boulevards upstream of the Vistula -from Żoliborz to Czerniaków is also a journey slightly upstream of history, which has settled on the Vistula embankment. Walking along the river, we pass the 10th Pavilion of the Citadel and the Gate of Deaths, the Piarist Convention and the Katyń Museum. At the boulevard level – numerous premisses and a lot of greenery.

Behind the Gdańsk Bridge, marinas and premises on the water start. and from the land side – Fort Legionów, the Multimedia Fountain Park, a view of the escarpment with the Old Town and the Royal Castle, and below – with the Royal Gardens.

General Patton Boulevard is the heart of the Boulevard. An unusual place with an amazing neighbourhood. This section includes:the building of the University of Warsaw Library with one of the largest and most beautiful roof gardens in Europe, the pavilion of the Museum of Modern Art and the Copernicus Science Center with another roof garden that is worth seeing, but what is inside can to keep even the busiest young child inside the building? It is a gigantic story about the uniqueness of our world, in which there are many secrets to learn, and the CSS offers a lot of tools for this adventure.

Next to the Copernicus Science Center building and the Planetarium, there is the Park Odkrywców, and right next to it the metro station.

It was this section of the boulevard that won three laurels in 2017 during the 4th edition of the Architectural Award of the President of Warsaw – Grand Prix award in the category for “Best public space” and perhaps the most valuable and meaningful – the Audience Award.

It is worth noticing the jury justification because it is the essence of what has happened in the last dozen or so years in restoring the Vistula to Warsaw, and the entire city of Vistula: “for creating a very attractive public space at the junction of the city and the Vistula, important for the identity of Warsaw. This is the next stage of restoring the river to the inhabitants and introducing new functions on the boulevards. The work of landscape architects, urban planners, architects of free – standing buildings, as well as floating and mooring at the wharf, as well as individually designed street furniture contributed to a quality unprecedented in Warsaw.”

Let’s move on. You can still hear the rattle of small wheels under the Świętokrzyski Bridge – this is where the most popular free skate park in Warsaw is located. And on the other side of the Bride – the Mermaid Monument and many expectations. We will have to wait a little longer for the new form of this episode. But there is access to the old concrete steps, which are new, because of the flower meadow sown in 2020, a bicycle path and a lot of open space. Lots of premises, barges on the Vistula, and the Pliszka ferry harbor at the Poniatowski Bridge.

The section between the Poniatowski Bridge and Cypel Czerniakowski mainly consists of premises, beaches and relaxation zones.

Hammocks, wood and light sand. And in the summer = plenty of ice – cold lemonade with honey and mint leaves.