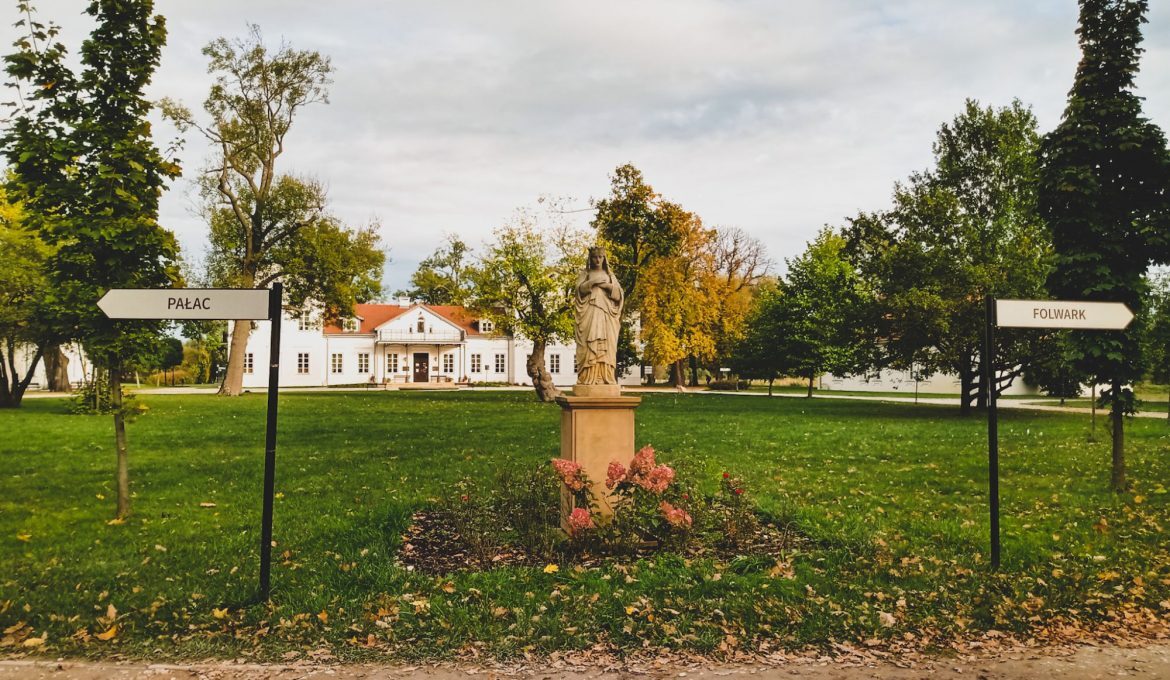 Łochów is a small town situated on the Liwiec river, in the heart of the Bug Landscape Park. An ideal place of a starting point for cycling and hiking

enthusiasts, for lovers of canoeing and sunbathing on the river, as well as for people in love with places and manners surrounded by old, mysterious parks. And for Norwid. It was the palace in Łochów that was one of the last places in

Poland that Cyprian Kamil Norwid visited just before his departure to the West. Forever.

A town with an elk in its coat of arms

You can go to Łochów by car (more about this option at the end) or jump with a bicycle or Nordic walking sticks on a train going to Warszawa Wileńska station towards Małkinia. An hour trip, we pass Urla, the bridge over Liwiec, Barchów and we are already in Łochów.

At the station, we are welcomed by a small, stylish station building from 1866, which has a film episode to its account – he starred in the second episode of the series „Dom”. On the wall of the building there is the city’s coat of arms – an elk’s head against a green background – sketched as if with a familiar line… That’s right! It is a drawing by Szymon Kobyliński, who lived in the nearby Gniazdowo. On the Liwiec river itself. Today you can rent accommodation in a beautiful wooden house there. The old wooden house are also waiting for guests on the exit towards Wyszków, Radziówka will certainly be loved by lovers of horses and Ukrainian cuisine, because in addition to accommodation, you can order two warm home meals a day from the hostess (pancakes with cabbage – a revelation!).

Why is it worth staying in Łochów for a few days? The Bug Landscape Park is a fantastic place to relax, hike or ride a bike. Lots of trails and asphalt side roads overlooking forests, birch groves, horse pastures… It is a neighborhood full of stables, and you can find places to keep horses available for longer rides. Peace and quiet on routes away from the main road.

You can use the trains of Koleje Mazowieckie which run on average every hour and drive two or three stations to reach nature reserves located along the railway line on foot, such as Wilcze Błota (Ostrówek Węgrowski station) or the famous Czaplowizna (Topór station) – these are marshy areas, better stick to the trail!

Łochów is located between Wyszków and Węgrów, so you can jump by bike on a trip to the Bug, visit Wyszków and Kamieńczyk (17 km one way, and you must visit the Gwizdek Museum on the way, you need to make and appointment in advance!), or go to Węgrów and the castle in Liw (approx. 30 km, which is already a serious challenge). Fantastic trips can also be made along the Liwiec river or go for a walk by the river to find an old settlement or the greatest attraction of Łochów – a beautiful 19th – century palace, where you can even… spend the night!

A palace with a farm, a gallery and…. an island of writers

The Neo – Renaissance palace in Łochów was commissioned by Count Józef Hornowski. Its first version, in the form of a one – story building with a column portico, was put into use in 1830. Almost a quarter of a century later, two – story projections and a front portico were added.

In 1842, Cyprian Kamil Norwid, a poet, playwright, painter and sculptor, visited here, and probably also before. It was one the last places in Mazovia, where he appeared before going west, so he would never return to Poland. Through almost the entire nineteenth century, the Hornowski family, related to Norwid through their great – grandmother, Hilaria Sobieska, lived in Łochów. The poet was in contact with tchem – he met them in Paris and corresponded. We know about him from the few surviving letters from Norwid addressed to third parties and from the few addressed to his cousins from Łochów. On this basis, it should also be assumed that there were breaks in the contacts, often very long. It is also highly probable that as a young man Norwid visited Łochów before his final departure from Poland in 1842. According to Stanisław Grądzki, the poet’s last visit to Łochów took place at the beginning of May 1842.

In the footsteps of Norwid, Łochów Society of Friends of Science and Arts „CD”, Łochów 2017

After the Hornowski family, the Zamoyski and Kurnatowski family were the owners of the property. After the Second World War, the property became the property of the state. There was a post office, a common room and apartments for farm workers in the palace. Over time, the building deteriorated more and more, some of the palace facilities were demolished and at the beginning of the 21st century it was practically a ruin. And then the property was bought by a private company.

Hotel, spa, gallery and art center with….and Island of writers Today, the Palace and Farm in Łochów is an elegant hotel and leisure complex and a conference center with meeting rooms, a wellness zone, and a children’s zone – with a room and a playground, as well as a farm with animals. In one of the buildings there is an art gallery, and in the so – called craft houses – ceramics, bakers, sculptors and weavers – regular individual and group workshops are organized. In the farm estate adjacent to the palace, you can rent cottages, operating all year round. Historic ponds give you the opportunity to go boating or relax on a water bike, you can also visit the Island of Writers and Poets with statues of Polish artists, headed by Norwid.

All this is interesting and valuable, but from the point of view of cultural heritage, it is also important that the place has been carefully rebuilt and is one of the most well – kept facilities on the Norwid route, and the private owners also care about the history and tradition of the building, including the one relating to the author „Chopin’s Piano”. From October 20, 2016, a special plaque commemorates his stay in Łochów.

And one more attraction in the palace grounds: a beautiful wooded church from Wólka Dobryńska, which served the local faithful for 72 years. When a new brick temple was built there, the older building was moved to Liwiec. It is open every day and you can visit it.

By car through the Republic of Norwid

If someone follows the footsteps of Cyprian Kamil with his own car, he can make an elegant „Norwid loop” and visit all the most important places related to this artist in Mazovia. We start from Warsaw on the S8 road to Wyszków. At the junction before the Trojans, you have to turn north to get to Dąbrówka, the place where the poet was baptized and where his mother was buried. They return to the southeast, jump to the other side of the S8 and turn 90 degrees north – east after the Trojans to reach Głuchy, where Norwid was born.

We will reach our next goal by taking side roads through Wysychy to Dębinki (another place inhabited by Norwid’s relatives, where the poet fell in love for the first time!). And further to the palace in Chrzęstne, where you can see a permanent exhibition devoted to the artist. From Chrzęstne through Jadów, the road to Łochów is straightforward, and if we plan our return to Warsaw via Mińsk Mazowiecki, we have the opportunity to visit Strachówka on the way – the place where Norwid spent several years with his great – grandmother Hilaria nee Buynów Sobieska after his mother’s death.

PS The name of Łochów has nothing to do with moose. It probably comes from the gully – the name of the blueberry.