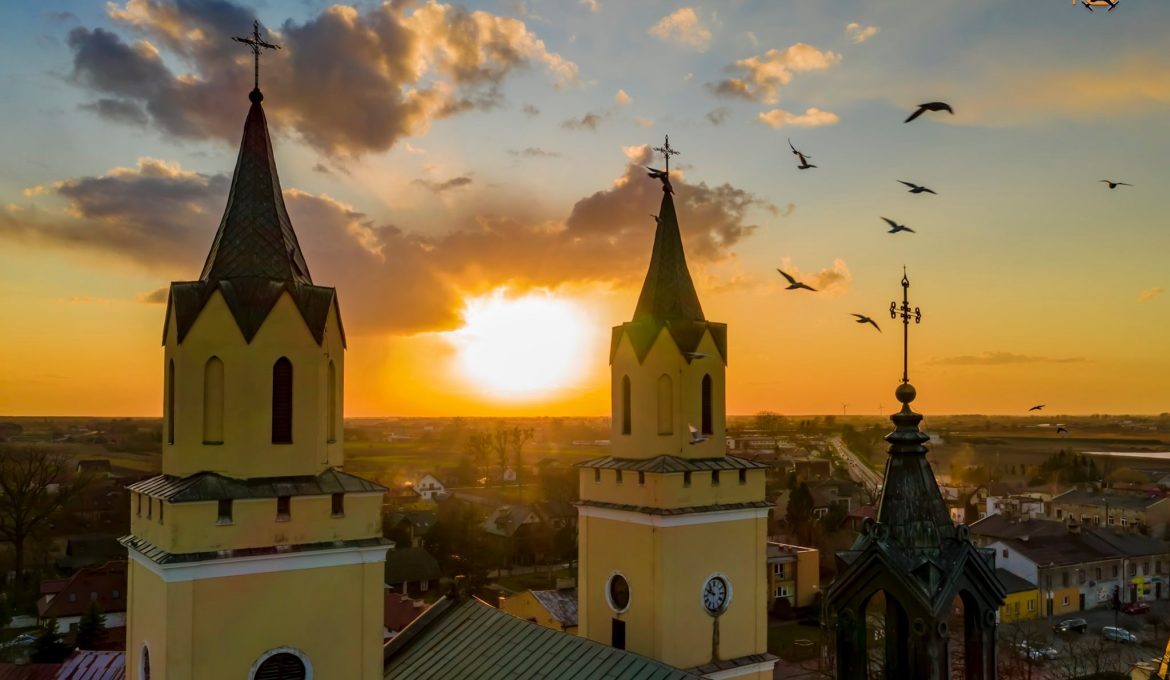 Who wants the impossible? Places with excellent access, but quiet and peaceful, with lots of interesting monuments and accommodation in the middle of the forest, with traditions and great history, but without snobbery and life in a hurry? Please! Here is Wiskitki: a city from January 1, 2021 with an urban history counted in centuries; once the center of the Wiskitki Primeval Forest and a hunting center of Masovian princes and Polish rulers; a quiet, calm and very busy communication junction between Warsaw and Łódź.

A town on the edge of the forest

The commune of Wiskitki is divided into four parts by two important communication routes – the A2 motorway Warsaw – Berlin and the national road No.50 from Sochaczew to Grójec. Each of the quarters: created in this way (definitely in quotation marks, as they differ in size) has its own character dictated by the dominant landscape and the functioning of the place. The south – eastern quarter is an urban part – Wiskitki, a small town in Western Mazovia, which regained its municipal rights at the beginning of this year. The word „regained” is of key importance, because it is one of the oldest cities of the former Duchy of Mazovia, having the status already in 1349, i.e. during the times of dukes Siemowit III and Kazimierz I. But the first Masovian Piast with which Wiskitki can be associated based on historical sources, was already prince Konrad Mazowiecki, at the time of whom the first duke’s hunting manor could be built here. Tur was included in the coat of arms of Wiskitki, and hunting for big game attracted not only prines, but also crowned heads to the Wiskitki Forest. King Władysław Jagiełło hunted in this area several times (on the website of the Town and Commune Office there are even specific years of his hunting expeditions on rounds), Kazimierz Jagiellończyk, Jan Olbracht, Zygmunt August and Stefan Batory were also supposed to visit here.

Today, Wiskitki tempts with interesting sacred architecture, the tranquility of three historic necropolises and the possibility of excursions to the Bolimów Foerst, the closest part of which is a reminiscence of the former Wiskitki Primeval Forest. During a visit to the town, it is worth visiting the Church of All Saints and Saint Stanislaus. The first brick temple was built in this place in the second half of the 16th century, but not much has remained of it – destroyed by a fire in 1603, it was rebuilt and consecrated in 1630. The present character – with two characteristic towers flanking the facade and side aisles, and with a new sacristy – the building was rebuilt in the 19th century. At that time, the chapel of our Lady of Lourdes was built, into which the old sacristy was rebuilt. The interior features, among others, the oak main altar designed by Konstanty Wojciechowski and the Stations of the Cross by the renowned religious painter Józef Buchbinder. Both artists were active in Mazovia in the 19th century.

The cemeteries in Wiskitki tell the story of the religious and cultural diversity of this place. The three denominational ones were established at the beginning of the 19th century, the fourth is a testimony to world wars that swept through Mazovia.

The dominant feature of the Catholic cemetery, established at the beginning of the 19th century and still active, is the neo – Romanesque tomb chapel of the Łubieński and Sobański families, which was published in a book monograph.

The Jewish cemetery, also established at the beginning of the 19h century and serving the inhabitants until World War II, is today an area surrounded by a concrete fence, where several dozen matzevot have survived. On the other side of the road there is a World War I cemetery. Several thousand soldiers of the Russian army, who died in 1915, probably during the gas attacks near Bolimów, were buried there. During the Second World War, over a hundred more graves were built here, in which German soldiers were buried.

The last cemetery in Wiskitki is a necropolis of local Protestants from the Evangelical – Augsburg parish. Most Lutherans rest on it, but some of the

tombstones also say that it was the place of the eternal rest of the Calvinist followers of Scotland.

The two northern quarters of the commune are mainly agricultural areas – fields and meadows crossed not only by roads, but also by small rivers – Pisa Gągolina, Sucha, Sucha Nida and Wiebianka, which run this way towards Bzura. But the western quarter also has two very strong points, which will not be missed by experienced tourists, because they will not be able to. The first of them is the palace in Guzów.

The Ogiński, Łubieński and Sobański Palace is one of the most interesting neo – Renaissance residents in Mazovia. It was built on the site of the late Baroque Ogiński manor house, the house where the most famous of the family was born in 1765 – Michał Kleofas, composer of the polonaise most often played at proms and other occasional balls.

The manor, as was usually the case with rich mansions, developed and expanded over time, and in the middle of the 19th century it was subject to a real revolution: the then owner, Feliks Sobański, hired the architect Władysław Hirschl, fashionable in Mazovia and Warsaw, who chose,,,, Renaissance castles on the Loire. The palace was surrounded by an English – style park designed by two giants in this field – Walerian Kronenberg and Franciszek Szanior.

Unfortunately, the two world wars and the Polish People’s Republic left their mark on the entire property. Destruction, looting, use of the building for the sugar factory’s office space and housing for its employees – the residence of the Ogiński, Łubieński and Sobański family entered the 1990s in a deplorable state. Only in recent years, thanks to the efforts of the Sobański family, descendants of the pre- war owners, the palace began to regain its splendor. The next stages of the extremely labor – intensive and fund – intensive renovation are documented on a special Facebook profile.

The sanctuary on Miedniewice, one of the most important in Mazovia for pilgrims (especially for the Warsaw academic pilgrimage), and for architecture lovers on of the most beautiful baroque church and monastery complexes in Mazovia, is a place that deserves a separate story, just like the place on Guzów.

A long time ago there was probably a beekeeping settlement here, as evidenced by the earlier name – Niedźwiedzice. Or maybe Miodowicz? Today no one is sure of this anymore, because the history of this place has been remembered exactly from the moment when a pious peasant hung a picture on an ak pole in his barn, brought from a fair near Opoczno. He prayed so earnestly in front of him that a glow appeared over the barn, which attracted worried neighbors fearing the fire. Others joined the pious host in prayer with their intentions, and the news of miracles happening thanks to the woodcut with the image of the Holy Family also attracted the attention of the Church. The painting was officially recognised as miraculous in 1677. It was then that a wooden chapel and a small building for members of the Reformed Order were built, in 1692 the construction of a brick monastery began, and later a large church, because every year there were more and more pilgrims visiting the miraculous place. The wooden pole, on which the holy picture was hung in the barn, is still today behind the altar of the baroque church designed by Józef Fontana and Tamasz Belotti. The entire church and monastery complex with a historic park can be found on the western loop of the Pearl of Mazovia tourist route.

Active recreation in the Bolimów Forest

The last, south – western quarter of the Wiskitki commune is almost entirely covered with forest. It is here, in the villages of Józefów and Sokule, that there are equestrian centers that teach horseback riding and organize horse trips (by horseback, in a trapper’s car tor in a carriage, and in the winter – the form of sleigh rides).

The whole area is perfect for exploring on foot or by bike -the few settlements are connected by local roads, which are perfect for two – wheeled trips. There are no marked trails, but you can use the routes marked out by the PTTK branch in Żyrardów and recommended by the Local Center of Western Mazovia – both for hikers, cyclists and motorists.

In this part of the commune you can also find cheap accommodation in agritourism farms, incl. In Smolarnia and Antoniewo, as well as more exclusive ones, for example in the Hipolit Manor. Accommodation, and in summer camps and summer camps, are also offered by the „Huzar” Equestrian Club, which is still expanding its offer.

A trip to Wiskitki, Guzów, Miedniewice and the Bolimów Forest is a great option for motorists who went on a short trip to Sochaczew, Żyrardów or Mszczonów. It is also a good idea for a bicycle trip with rail access. This section of the Bolimów Forest can be reached by the Koleje Mazowieckie train from any station on the Otwock- Skierniewice line. Drop off in Sucha Żyrardowska or Jesionka (from Warsaw – first and second stations after Żyrardów, less than a 45 minutes trip).