Home ⁄ TRIPS ⁄ CZERWIŃSK ON THE VISTULA RIVER. AT THE CROSSING OF HISTORICAL TRAILS 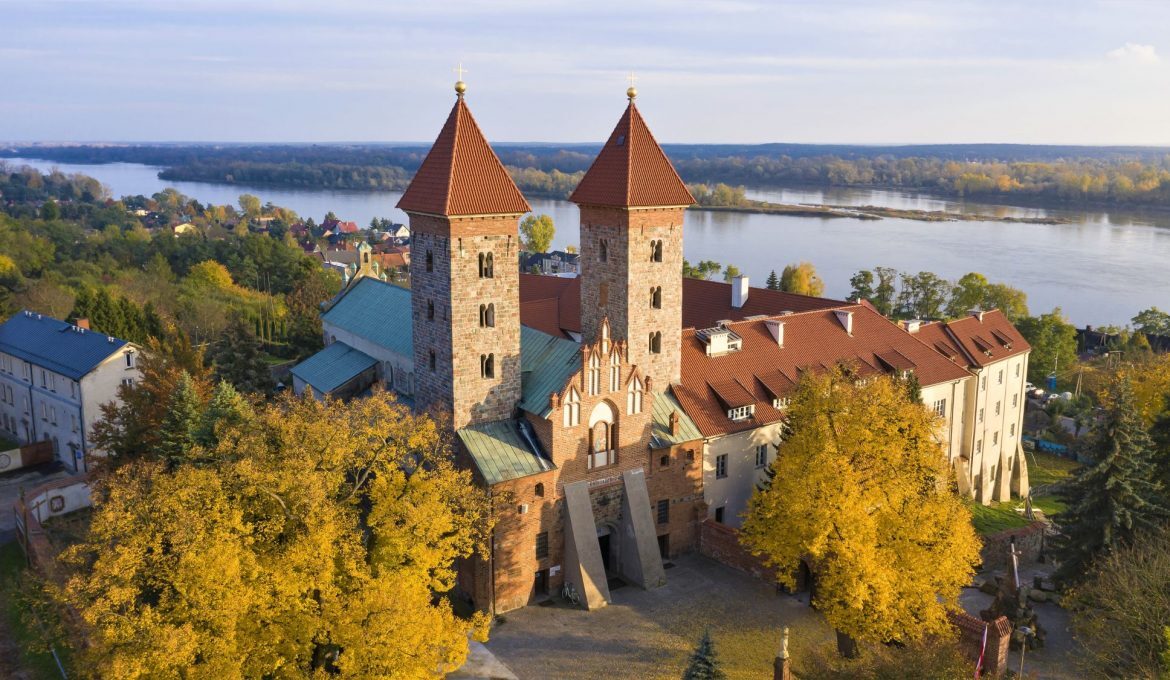 Czerwińsk is a city! Again! A small town with unique Romanesque monuments on a national scale, a medieval urban layout, a mission museum with souvenirs from around the world and the „Mystery of the Passion” attracting pilgrims from all over Poland during Lent, regained its city rights on January 1, 2020 after 151 years of break!

Czerwińsk on the Vistula River received city rights many centuries ago, twice because separately, two centuries apart, from each of its parts – the bishop and the monastery. It was the monastery (then – regular canons) that initiated the historical existence of Czerwińsk in 1155, documented by the papal bull of Hadrian IV.

And it was the monastery that at the beginning decided about the development of Czerwińsk, as well as its location on the Vistula, on the route connecting Pomerania with Masovia and Małopolska. At that time, the river was also a natural barrier which additionally protected the stronghold against the invasions of Prussians, Lithuanians and Yotvingians.

Although the papal bull concerning the monastery is the first document in which the name Czerwinsk was written, the eastern part of the town belonging to the bishops of Płock, was the first to receive municipal rights – in 1372. The western part of the monastery officially became a city in 1528, i.e 200 years later, when Mazovia was already part of the Crown of the Kingdom of Poland. Between these two legal acts, the most important events in the history of the town took place in Czerwińsk.

In July 1410, a skating bridge was built in Czerwińsk, on which the troops of the Polish king Władysław Jagiełło crossed the Vistula and thus could surprise the Teutonic army and, with the help of the Lithuaninians, announce the victory at Grunwald. In Czerwińsk, also in 1419, negotiations were held between the Kingdom of Poland and the King of Denmark, Erik Pomorski (or actually a triple Scandinavian ruler, because at that time he was also the king of Norway and Sweden, although during these negotiations he was mainly concerned with the Danish interests) regarding a common front against the Teutonic Knights and Hanseatic cities. Three years later, King Władysław Jagiełło reappeared in Czerwińsk to issue one of the noble privileges called Czerwińsk, and in 1475  the „Czerwińsk Code” was created here, a legal act created in turn by the duke of Mazovia.

So Czerwińsk went down in the history of Mazovia and Poland in golden letters, it became a city two centuries before Warsaw, but – unlike today’s capital – its role was marginalized over time. The abbey, attracting pilgrims with the miraculous image of Our Lady of Czerwińsk, was not enough for the town to develop. And because Czerwińsk did not benefit from floating grain on the Vistula, but was often flooded by river waters and destroyed by fires. Its significance decreased, and the final blow was the monstrous demange done during the Swedish deluge. Only half of the town’s buildings remained and since then the process of degradation continued. In 1869, several dozen years after the dissolution of the monastery, Czerwińska with a population of several dozen lost its municipal rights.

On the route of history lovers and pilgrims

The contemporary Czerwińsk is primarily a tourist attraction. Architecture enthusiasts are attracted by the beautiful Romanesque basilica, pilgrims – the miraculous painting of Our Lady of Czerwińsk and the staging of the „Mystery of the Passion” staged on all weekends of Lent (this year from March 7 to April 5), as well as the opportunity to visit the mission museum on the monastery, which stood the seat of the Salesians. The charm of this order, based on educational activities, makes the monastery and its surroundings enliven with creative youthful energy during music and theater workshops, and above all during the international youth festival Campo Bosco (in 2020, it will be held from 22 to 24 August).

A monument of the highest class in Czerwińsk is a two – tower Romanesque basilica with a surrounding monastery complex. The construction of the temple founded by the bishop of Płock, Alexander of Mallone, began in the third decade of the 12th century. A huge Romanesque portal comes from the middle of this century, probably made in Italy in the workshop of Wiligelm of Modena. According to legend, Polish knights headed by King Władysaw Jagiełlo to the field of Grunwald sharpened their swords by the two smooth columns of the portal. Not far from here, they crossed the Vistula along the skate bridge to join the Lithuanian forces of Prince Witold.

While visiting the basilica, do not miss the Romanesque frescoes. It is probably the largest collection of 13th-century wall paintings in Poland. After leaving the temple, you can knock at the monastery and ask for a tour of the local museum, which presents souvenirs from the missionary journeys of the Salesians to various parts of the world, And later, it is worth taking a stroll through the streets of the former city, because its urban layout with historic residential buildings is another treasure of Czerwińsk.

It is also worth mentioning that the city of Czerwińsk has been located on the Masovian part of the Way of St. James running along the Vistula River from the Cathedral of St. Jan in Warsaw through Las Bielański, Tarchomin, Modlin, Czerwińsk and Wyszogród and Płock to the Wielkopolska line and further to the routes leading through Germany, the Czech Republic, France and Switzerland to Santiago de Compostela in Spain.

Photos from the #KamperemPoMazowsze campaigns are aimed at promoting the tourist attractions of the region, however, some shots were taken in places that are inaccessible to motorhomes on a daily basis.