Home ⁄ TRIPS ⁄ OSTROŁĘKA. CITY OF “PUSZCZAKI” AND THE FRENCH TRIUMPH 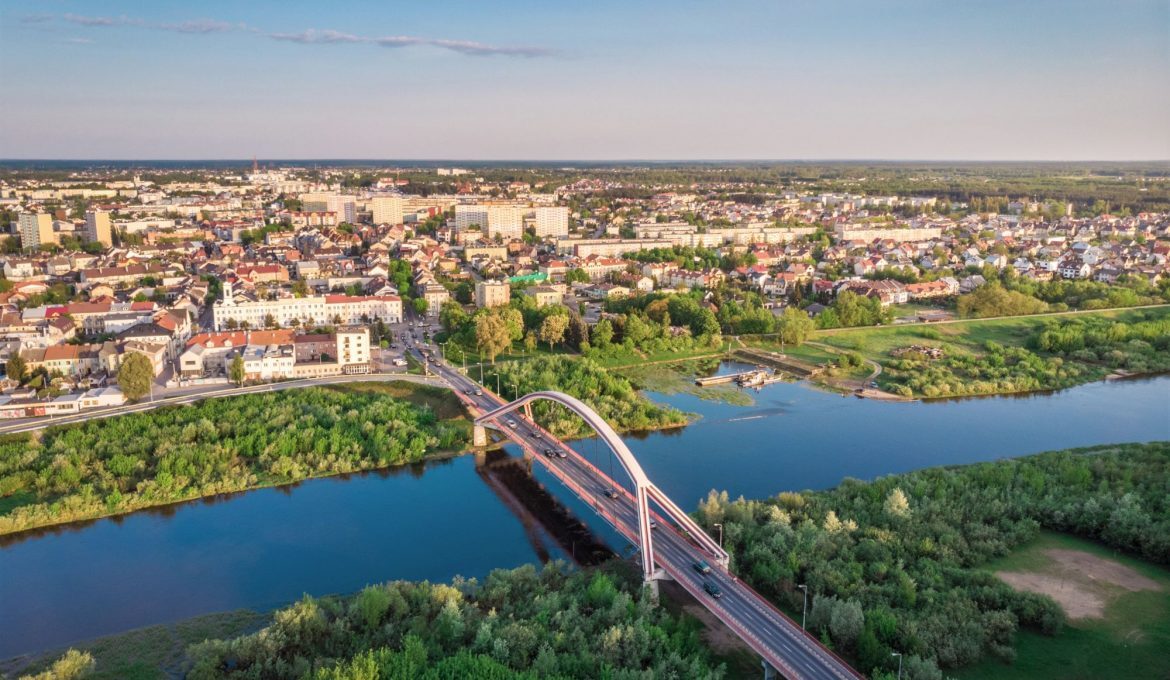 If you enter the road to Ostrołęka, you will not regret it. At its destination awaits the city, whose name was written on the Arc de Triomphe in Paris, picturesquely situated on the outskirts of the Kurpie Forest known as the Green, on the Narew River, with the beautiful Madaliński Bridge modeled on the bridge in Seville and the Kurpie Culture Museum. It is here that the seat of the Kurpie Association is located, so here the most ideas are born on how to preserve, revive and bring the Kurpie traditions, culture and language to others.

Kurpie has a very characteristic folk culture, a history that they pride themselves on for their bravery, hardness, and even hardness, legends, songs and poetry, and of course their own dialect – and from 2017 a primer for learning Kurpie issued by the Kurpie Association.

Interestingly, Ostrołęka is not a typical Kurpie town, because it is not located in the forest, and Kurpie people have always called themselves primeval forests, because they settled in the forest, gew up and lived from the forest. Therefore, they do not call Ostrołęka the Kurpie capital, this title is reserved for two cities competing for this name – Kadzidło and Myszyniec.

From the 15th century, and even more often in the 17th century most often at the beginning of the 18th century, it became a primeval forest by choice. In the 16th century, there were no Kurpie villages yet, only places where beehives stood and where the beekeeper, sometimes with his family, lived nearby. There were also places where charcoal was burned and hunters’ huts. Strictly, poorly, but in the case of plague – relatively safe. Lipniki is considered to be the oldest settlement in Kurpie. It was founded in 1663 by a certain Wiśniewski, a fugitive from Piotrków Trybunalski. The reasons for his retreat are unclear, some said that he escaped the sentence, others that gossip. Apparently he was a nobleman. There were plenty of such refugees – from sentences, serfdom, hunger and wars in the Green Forest. They joined honey hunters, tar makers, fishermen and hunters, independent, self – employed people, usually very good at handling weapons. On my own account! In times of serfdom!

It was there, in the forests of the Narew River, that the first honey hunting law was developed, which protected honey hunters as a professional group against the greed of magnates. Exactly: „Bartne’s lawyer, the honey hunters who, according to him, are to act and judge, as described below, to the Przasnysz County by the Dear Lord Krzysztof Niszczycki: Przsnyski, Ciechanów Starost, etc. decided in Anno Domini 1550”.

Mid sixteen century. Difficult forest conditions, but life on its own terms. Independence from lords, courts and own law – this could not but affect the way of thinking about the world and about ourselves. Hence the famous Kurpie hardness and hardness, a sense of dignity, but also the hospitality that is characteristic of them. They were at home, they had nobody above them, except God Himself, they could host whom and how they wanted.

A city of the edge of the forest

Ostrołęka, whose roots are as deeply rooted in history as the oldest cities in Mazovia, is a different story. By the way – in the second half of the 18th century it was one of the three largest cities in the region, next to Warsaw and Pułtusk!

The first stronghold existed in this area as early as in the 10th century, in the 11th and 12th centuries a market settlement on the Narew River, through which the trade route from Mazovia to the east led, developed so dynamically that in 1373 it received the privilege of the mayor of Siemowit III and probably already had city law.

Queen Bona made a beautiful place in the history of Ostrołęka, which in the 16th century made the city a center of crafts and trade. Why Ostrołęka? Because it was the largest city in this area on the Narew River, the then highway flowing into the Vistula River. It was this way that wood and grain were transported all the way to Gdańsk.

During the times of Bona Ostrołęka had 2000 inhabitants. After that, it was not always rosy anymore. First, the town suffered from a plague, then a fire, and then the Swedes arrived and in 1660 only 400 people lived here. The next fights with the Swedes took place at the beginning of the 18th century and the famous battle of Kopański Most, in which Kurpiki fiercely defended access to their forest.

But the most famous in the history of Ostrołęka was the Battle of Ostrołęka between the French and the Russians – one of the most important battles of the Napoleonic campaign in Mazovia. It ended with the victory of the French, and the name of the city lying on the edge of a great forest was engraved on the Arc de Triomphe in Paris.

A separate part of the history is the period of the People’s Republic of Poland, when, despite the colors of Cepelia, the Kurpie traditions of freedom, independence and separateness were hidden. But after 1989, the Kurpie people caught the wind in their sails and began to intensively return to their traditions, also in everyday life. One can even quite accurately indicate the moment when the Kurpie heritage was carefully cared for – the establishment of the Kurpie Association in 1996.

From that time, the renaissance of Kurpie pride in origin, language, customs and fold culture, including culinary, began. Fafernuchy appeared at folk festivals along with Kurpie cutouts and products made of beeswax and amber.

In 2008, the collection „Kurpie – legends and tales’ ‘ was released, reissued in a revised and expanded edition in 2016. Almost 60 stories collected among the oldest inhabitants of Kurpie, among them the story of why the Kurpie people do not do serfdom, stories about nightmares, about the tracker or legends about the creation of various towns. In 2017, a textbook for learning the Kurpie dialect was published, and in January 2020, the „Illustrated Kurpie Dictionary”.

We managed to get to Ostrołęka. What is worth seeing? It is true that there is no Arc de Triomphe here, but there is a monumental mausoleum devoted to

the heroes of the Battle of Ostrołęka. But not to the French and their victories, but to the battle of the November Uprising of May 1831, when Polish troops clashed with Russian troops.

It is also worth visiting the medieval fortified settlement, walking around the old town, where the medieval town layout has been preserved in the vicinity of the market square, visiting the parish church and St.Nicholas from the 14th century… But most of all, please go to the post office. Actually, to the former post office from the first half of the 19th century. This is where the Museum of Kurpie Culture is now located. In front of the facility there is a monument to General Józef Bem, who became famous during the Battle of Ostrołęka in 1831 with a daring and effective attack of light horse artillery on Russian troops.

You can get acquainted with the history and tradition of the Kurpie region by visiting the permanent exhibition in Ostrołeka and Kurpie. Between the thread of history and the matrix of life, the exhibitions are devoted to Kurpie cut-outs. Among the permanent exhibitions there is also a historical exhibition The work of the soldiers of the November Uprising on the Great Emigration and a gallery of Polish art of the first half of the 20th century presenting the Museum’s collections.

Where for lunch? Only where they serve rejbak (or kugiel) – a baked potato cake with meat, and a goat beer with a juniper aftertaste. Although the latter can be found more and more often not only in Kurpie and Warsaw and other parts of Mazovia, but all over Poland in good craft beer venues.

shared toilet: YES – in the building of the Kurpie Culture Museum only for guests (after purchasing a ticket) and during the opening hours of the facility.

Photos from the #KamperemPoMazowsze campaign are aimed at promoting the tourist attractions of the region, however, some shots were taken in places that are inaccessible to motorhomes on a daily basis.