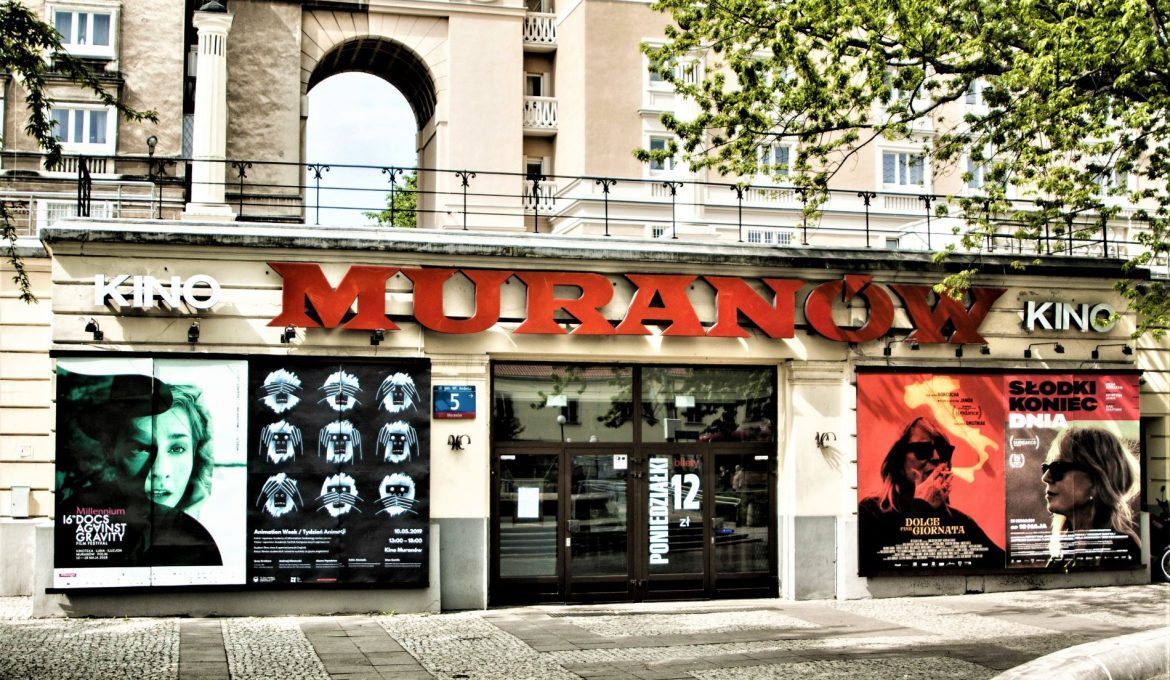 There used to be more of them, but there is no shortage of good studio cinemas in Warsaw. Some have changed locations and owners, but their situation is usually already stabilized. There is no famous Stolica Cinema, but the legendary Iluzjon operates in the same building today. The Atlantic continues at Chmielna Street. The Muranów cinema operates dynamically in the part of Warsaw from which it takes the name “Muranów”. The Kultura cinema merged with the Rejs and successfully operated at Krakowskie Przedmieście, and Luna cinema at Marszałkowska Street. Unfortunately, the unforgettable Femina Cinema is no longer operating, but the Elektronik next to the Warsaw Film School, has regained a new life.

Polska Kronika Filmowa instead of popcorn

The Iluzjon is a real vagabond – no Warsaw cinema has changed its address so many times! At the beginning, in March 1956, the Iluzjon was a club operating at the Film Archive. Later, screenings were held at the Kultura cinema at Krakowskie Przedmieście, in the hall of the building of the Council of Ministers at al. 1 Armii Wojska Polskiego (today Szucha), at the Aurora cinema at Kredytowa Street, at Plac Trzech Krzyży in the Pod Kopułą room and in the Polonia and Śląsk cinemas. When the decision was made that the permanent residence of the Iluzjon will be the former building of Stolica cinema in Mokotów, the Iluzjon ended up temporary at Niepodległości 213. That used to be the auditorium of Stefan Dembe at the National Library. Finally the Iluzjon is located at Narbutta 50 a, where it is still operating since 2012 in the renovated characteristic building, also serving as the Museum of Film Art.

Fans of the 10th Muse love this cinema for its special repertoire, reviews and festivals, affordable prices, educational activities and… Polska Kronika Filmowa, which can still be seen  here before selected screenings. They can also show their love. When, in 1996, the Minister of Construction terminated the lease agreement with the National Film Archive at the Śląsk cinema 4 Wspólna Street, where the Iluzjon cinema operated the longest, a demonstration of students and Warsaw residents against the closure of the favorite cinema, passed through the streets of the capital.

Today, the Iluzjon is a multimedia Museum of Film Art with two rooms and the most modern projection equipment that allows the playback of formats from 16 mm to 3D. As a part of the National Film Archive with the largest collection of archives and films in Europe, the Iluzjon has the status of an archival cinema. It is located in a modernist building designed in 1948 as Stolica Cinema by Mieczysław Piprek.

The oldest cinema in the capitol

There were even 70 cinemas in Warsaw during the interwar period! Of course, if we add up such wonders as the film – bedding films screened on the sheets, the Rozkosz cinema at Belgijska street, or the Moralność cinema located in the parish hall, that is to save the souls deprived in the neighboring Rozkosz.

The Atlantic cinema belonged to a completely different category: it was one of the most modern cinemas of that time, although it was established in the courtyard of the 19th century tenement house. Opened in February 1930, the facility was adapted to the projection of sound films from the very beginning.

During the war, the interior of the cinema was devastated, but the building survived and the first screening (the Soviet film “Berlin” and the Polska Kronika Filmowa) took place on September 19, 1945. In 1955, Leopold Tyrmand mentioned the Atlantic cinema in his most famous novel “Zły” and in 2014, the exhibition “Streets of Tyrmand” at the Museum of Literature was accompanied by the film project “Od Moskwy do Atlanticu”.

After the war, the cinema underwent two major renovations and modernizations. The most famous element of the first, from the late 1950s, is the symbol of the facility: the Atlantic neon with a stylized mast of a sailing ship with a flag on blue weaves in the background. Unfortunately, in the 1990s when another renovation took place, the neon was lost and replaced with a new one sparing in form.

Interestingly, the Atlantic is today the only big cinema in Warsaw not belonging to any of the distribution networks. It mainly presents premiere and commercial films, although there are also special screenings, large meetings with authors combined with screenings and press shows. Four independent projection rooms, including two adapted to the needs of people with physical disabilities, modern equipment for playing movies in 3D technology, top – class Dolby Digital Surround EX and SDDs sound systems, a cafe and a large foyer and a great location in the very center of Warsaw are the advantages of the oldest the still operating cinema in the capitol. It is not a coincidence that in its vicinity, Pasaż Wiecha, there is the “Warsaw Walk of Fame”.

Cinema instead of garages

The Muranów cinema was established in 1951 and was then the first cinema in Warsaw with two projection rooms. It was built according to the design of Michał Ptic – Borkowski in the place where it was initially planned to build….garages. The interiors were designed by the same architect, and the projection rooms were originally painted in fruit colors: raspberry and peach?

Since 1994, the cinema has belonged to Gutek Film company and is its showcase. In four cinema rooms you can watch the best cinema productions in Europe (and not only), both distributed by the Gutek and other companies focusing on ambitious artistic cinema. Activities promoting outstanding films and taking up important social discussions brought the institution the Award of the Polish Film Institute 2006/2007 for the Best Cinema, as well as the Europa Cinemas Award for the best repertoire program among all cinemas in 2003 in the Europa Cinemas network, to which Muranów belongs. The cinema is also affiliated to the national Network of Studio Cinemas.

It was probably the first cinema in Warsaw that organized regular screenings for adults taking care of young children – with lighting in a part of the room, changing tables and the sound level adjusted to the presence of children. The cinema also hosts educational meetings and workshops, special screenings and once popular DFKs, for example, the Film Discussions Club meetings.

Culture and building of the government office in the neighborhood

The cinema in the building at 21/23 Krakowskie Przedmieście was probably opened at the same time when the General Cinematography Board moved in. Initially, it was the cinema of the cultural workers’ union, but with time it became a unique cinema visited passionately by students of the nearby University of Warsaw.

The cinema is still close to the government office, after all, the address of the Ministry of Culture and National Heritage is 21 Krakowskie Przedmieście, and in the ministerial courtyard there is an entrance to the second room of the Kultura cinema, that until some time ago existed as an independent Rejs cinema. It is true irony of history that the title of the rebellious comedy, quotes from which are still circulated in colloquial Polish today, is named by the place, where during the times of the Polish People’s Republic, films were colluded or simply censored.

There are two rooms – a bigger one with a stage, an interesting repertoire, meetings, reviews, wonderful, photogenic surroundings and wonderfully affordable prices, especially on Mondays – the Kultura cinema has its advantages and still attracts students. Fun fact: the Rejs room has a unique lecturer’s booth to this day!

The name Luna obliges, although the Moon was an indirect inspiration.  The name of one of Warsaw’s favorite studio cinemas (the title of “the most positive cinema in Warsaw”) comes from the Soviet space program Luna? This is not the only accent of Polish – Soviet “friendship” in the history of the institution, the cinema was inaugurated on July 22 1962. Fortunately, the name also reflects “cosmic quality” and repertoire.  Two cinemas, modern digital projectors (the only 4K projector in Warsaw) and traditional 35 mm, ambitious, non – commercial repertoire and numerous pre-premier, special and festival screenings, as well as other cultural events including meetings with cabaret artists – a wide variety of movies, the prices are affordable, and the place is perfectly situated at Marszałkowska Street, in the vicinity of Zbawiciela Square.

The cinema is associated with the Network of Studio and Local Cinemas, Art Cinema C.I.C.A.E. And the Europa Cinemas network promotes European cinema. Among the numerous awards, it also has the title of     “Senior – Friendly Place”.

Once upon a time, in the early 1960s, there was a school cinema established in Żoliborz as a part of the Economic School Complex. It is therefore called “Kino Elektronik” attracting not only film screenings, but also artists. On the cinema stage, among others, it was possible to see Jan Pietrzak, Wojciech Młynarski or Jerzy Zelnik. There were also meetings of the Film Discussion Club “Frankensteinik” taking place with attendance of Andrzej Wajda and Maja Komorowska.

Maintaining a large hall with back – up facilities was financially demanding, so the school sublet it first to the organizers of cultural events, then to Wisła cinema, and finally to the Vision company, that failed to start its business. After a fire brigade inspection, the cinema was closed in 2001, and the equipment and the buildings were deteriorating for over several years, until another educational institution became interested, this time closely related to the film industry – Bogusław Linda and Maciej Ślesicki Warsaw School.

The ceremonial opening took place on May 30, 2015, and the cinema has become practically a multi-functional cultural center with cinema screenings, performances, concerts, meetings with authors and screenings of students’ etudes.

The building is also an artistic curiosity: it has been decorated with murals referring to the history of cinematography, made with a very special technique – some of the paintings are legible, if you look at them from a specific place and an appropriate angle. If you are interested in street art, you should definitely check out the film’s hall – a feast for the eyes!