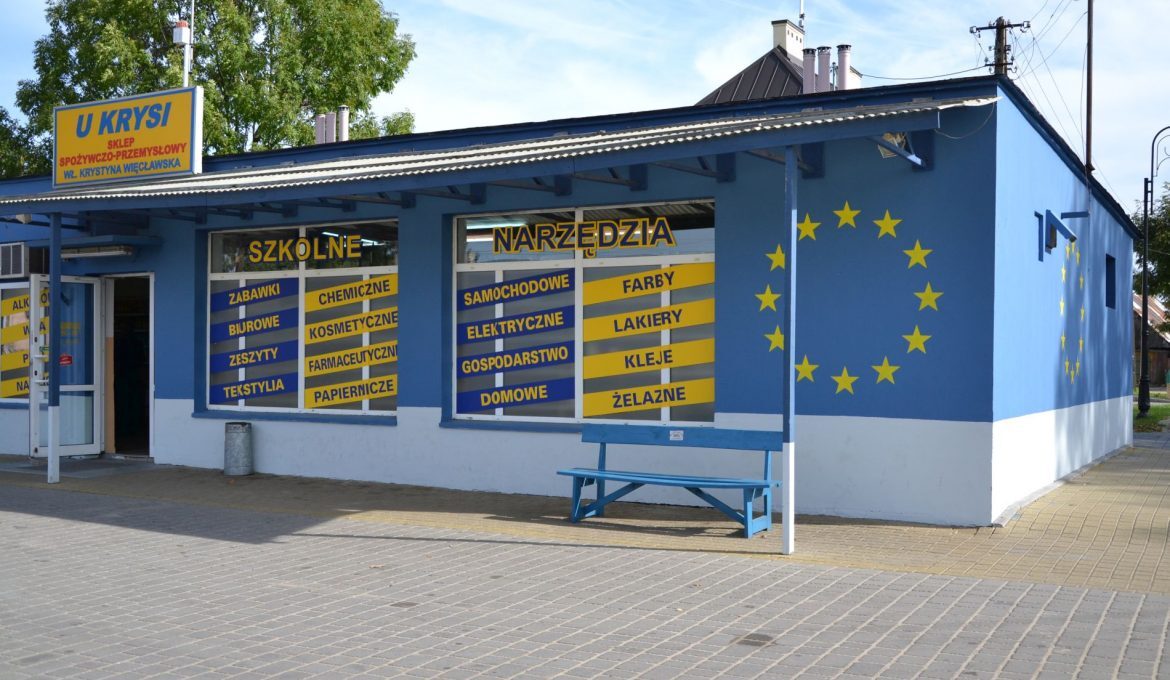 Has the film-series “Ranczo ” became for Jeruzal the same as adaptation of Peter Jackson’s “The Lord of the Rings” was for New Zealand? – “know the proportion, mocium panie” as per Cześnik of Fredro would warn. But if we take into account proportions – in terms of circulation and momentum and the differences in genre and medium –  the impact of a popular series and an epic fantasy work on tourism, may turn out to be similar. Proportionally, of course, also for the area visited by tourists.

Jeruzal is a village located on the border of Mazovia and Podlasie, but there used to be a town here. The proof of the medieval past of the town is the rectangular market square situated at the intersection of main roads. There are places well known to viewers: PKS bus stop, where Lucy Wilska got off in the first episode of “Ranczo” shown in spring 2006, the wooden parish church and presbytery, “U Kasi” store and the most famous bench in Poland. The story of Wilkowyje and the inhabitants of this extraordinary town ended in 2016, also on the market square, with a toast with a local specialty – Mamrot wine.

Ten years, ten seasons, 130 episodes, each with a huge audience. The finale of last season was watched by over 6 million people during the premiere broadcast! Of course, this is not much compared to the audience of Tolkien movies, but on a Polish scale – a real phenomenon  that will probably still be subject to serious analysis.

The viewers fell in love with inhabitants of Wilkowyje and the place itself, and  the reality of the series began to…get beyond the screen. The Mamrot wine appeared at the store and the gastronomic companies started producing Solejukowa dumplings. Fans of the series became friends with the film crew, and the crew became interested in the everyday life of Jeruzal and…the situation of the local church. In order to raise money for the renovation of the church, the creators put up an auction to play in one of the episodes! To this day, three years after the last episode of “Ranczo” was broadcast in August, the Jeruzal inhabitants organize the Folk Fair in Wilkowyje!

Spring, summer, early autumn – when “Ranczo” shots were taken – is also the best time to visit Jeruzal. It is most convenient to come by your own car, although you can also get from Warsaw or Mińsk by bus (4 times a day form the capital). It is best to start walking in the footsteps of the heroes of “Ranczo” from the market square. You can start with the obligatory selfie on the bench, and  then a visit to Więcławska’s store. Maybe I can buy a bottle of Mamrot wine?

Apparently it smells like fruit, but it is better to treat it as a souvenir.

Rynek 2 is the address of the wooden church of St. Wojciech, built in the mid 18th century. Inside, you can feast your eyes upon the Baroque decor and recall the weddings of Lucy and Kusy, Michałowa and Stach Japycz or Wioletka and constable Stasiek. The parsonage next to the church is the former kingdom of Michałowa and the parish priest, and in the nearby building of the former organist’s house there was a film parish room, where Lucy held English classes for children.

At Rynek 15, in a house built in 1920, there was a serial primary school (in fact, the Commune Library). The new school building, built in Wilkowyje thanks to EU funds, is an authentic School Complex at  8 Szkolna Street.

And two more important addresses in Jeruzal: Pharmacy at 2 Browarna Street, where Halina began the affair with Polakowski, the pharmacist, and 25 Browarna Street – the abandoned house playing the role of a herbalist’s cottage.

Jeruzal and surroundings villages and towns

An interesting option for visiting places related to “Ranczo” is a bicycle trip. The trail mapped out in 2014, covers not only Jeruzal, but also the surrounding towns related to TV blockbuster production, including Łukowiec (the house of Wioletka and Stasiek), Strachomin (U Japycza restaurant), Rozstanki (the house of the head of Kozioł) and Latowicz (the post and the Latowicz Commune Office, and in the series – the Commune Office of Wilkowyje).

You can also find a map of the trail with the most important special locations marked on the market square in Jeruzal. You can also plan a route yourself or plan a bike weekend in a picturesque area and take the opportunity to enjoy the beauty of the idyllic landscapes. It may not be New Zealand, but the terrain in terms of topography is quite diverse. There are also beautiful forests and nature reserves in the area.To see the ranch from the title of the series, the house inherited from the beloved grandmother of Lucy, it is better to use the car and drive 100 km all the way to Żyrardów. The beautiful, 17th century manor house is located in Sokuły, and it was not the first time filmmakers were charmed by the place. Decades ago, it was used to make one of the most beautiful Polish series “Noce i dnie”.