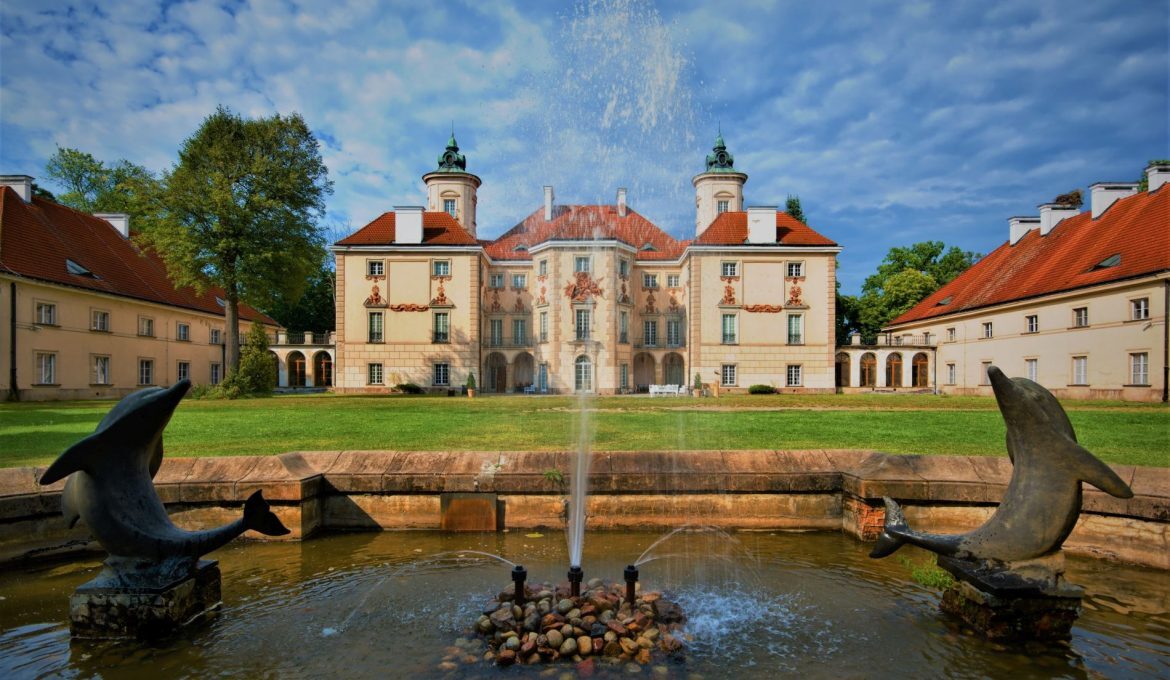 The palace in Otwock Wielki was built at the end of the 17th century as a summer magnate residence. Several dozen years later it was rebuilt in a year-round seat and today it serves as the Interior Museum, which is open… seasonally from the beginning of April to the end of October. This is not the only twist in the history of this beautiful Baroque building.

Once upon a time, the palace was filled with life and witnessed a scandal with the king in the main role, later it fell into disrepair, and it became a tourist attraction…at the end of the 19th century.

The palace in Otwock Wielki was built in the ninth decade of the 17th century on an island on the Rokola Lake as a summer residence for newlyweds – Kazimierz Ludwik Bieliński and Ludwika Marianna Morsztyn. He was the Grand Marshal of the Crown, a representative of a powerful family associated with the Saxon court, she – the daughter of Katarzyna Gordon, the lady of Scottish roots, belonging to the court of Queen Maria Ludwika Gonzaga, and Jan Andrzej Morszyn, one of the most outstanding Polish Baroque poets, former secretary royal, who built the palace on the 17th century outskirts of Warsaw. It was the beginning of the future Saski Palace.

Getting back to Otwock Wielki with its high life thanks to the Bielińskis’ connections. The lavishness of the court that Katarzyna and Kazimierz Ludwik ran in their residence can be proved by the frequent visits of King Augustus II the Strong, who liked not only the place, but also Marianna, the daughter of the Bieliński family. To prevent a scandal, Bieliński made his daughter marry the Grand Chamberlain of Lithuania, Bogusław Ernest Denhoff. He did not appreciate the power of Marianna’s feelings, who begged Pope Clement XI to divorce the general of Lithuanian artillery and….followed King Augustus to Dresden, where she liked to interfere with politics, favoring the French party. It is worth mentioning that the great scandalous got married eventually and quite well, because she married Prince Jerzy Ignacy Lubomirski and had two children with him.

King August II was not the only ruler who visited Otwock and the Bieliński family. In 1705 he met here with Peter I, still the tsar there and several years later the emperor, who was nicknamed “the Great” by his descendants and history.

The palace belonged to the Bieliński for a few generations, including 1713 being taken over by the son of the first owners, Franciszek, who later became the Grand Marshal of the Crown, the one who left Warsaw paved and illuminated, and as a result became the patron of the main street Marszałkowska. Later, the goods of Otwock were handed over to the castellan and popular journalist of the times of Stanisław August – Jacek Jezierski, who after the partitions, left the public service and settled in the residence located 30 km from Warsaw. After his death in Otwock in 1805, the palace began to fall into ruin.

In 1827, the property was bought by the Kurtz family, the palace was renovated and was under the care of a thriving merchant family for three generations, but after the death of its last owner in 1857, it began to deteriorate again, and with time it became a tourist attraction near Warsaw.

Otwock is undoubtedly one of the most charming towns in flat Mazovia, just a few miles from Warsaw. The well- preserved ruin of the castle, standing on the shores of the lake with other lakes on sides, and connecting canals, presents a very romantic view

The history was not kind to the palace. The building returned to the Jezierski family for a short time, in the People’s Republic of Poland for some time it was the seat of a reformatory for girls. Later it served as a government building, in the 90s it became the property of the President’s Chancellery, and in 2004 a branch of the National Museum in Warsaw and is a part of the Interior Museum now. It is open from the beginning of April to the end of October, so it could be called a summer residence, as it returned to the original concept.

By car, train, bike or bus

It is best to book a visit to the interiors in advance, because the tour is always guided in groups of about 20 people. When the museum is open , there is a cafe, stocked only with drinks, but also homemade cakes and ice cream welcoming guests.

You can arrive by car, but you also use a suburban train, get to Świder station and from there take the blue bicycle route to Karczew, and then the black one straight to the palace in Otwock Wielki. Another option is to take a minibus from the stop at the National Museum in Warsaw and a 2-kilometer walk from Karczew to the palace, located in the picturesque park.