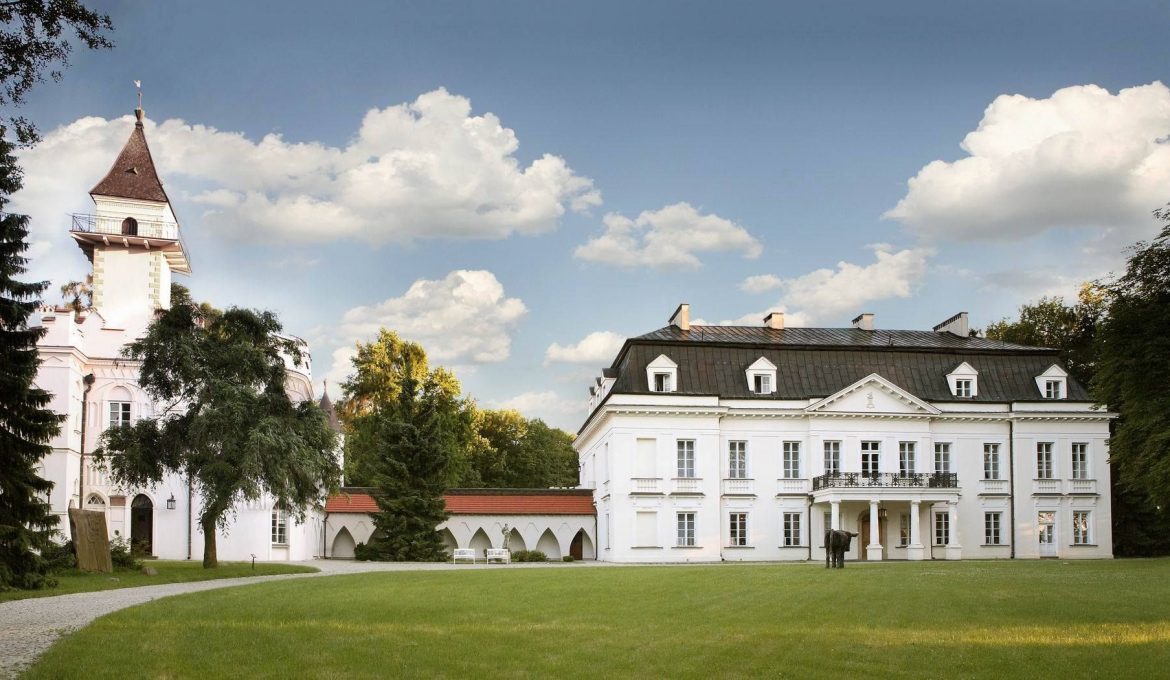 Palace and Castle in Radziejowice

You need to know how to find Radziejowice. Such architectural gems, full of amazing memories and stories, like the palace in Radziejowice, that was given the last touches by Merlini’s student and where three Polish rulers and many outstanding artists stayed for the night, often hide from the curious eye, away form the main roads, in small towns belonging to once magnate families.

The former property of the Radziejowski, and later the Prażmowski, Ossoliński and Krasiński family, an extensive palace and park complex is located on the backwaters of the river with the intriguing name Pisia Gągolina. It is located 10 km south – east of Żyrardów. The complex includes: a classicist palace, neo – Gothic castle, a larch manor house, a blacksmith shop, quadruplets and a Swiss villa, and all is surrounded by and English landscape park with a linden and ash avenues as well as a beautiful specimen of ginkgo biloba.

A Baroque palace erected in Radziejowice at the beginning of the 17th century by Stanisław Radziejowski, the voivode of Łęczyca, was thoroughly rebuilt at the turn of the 18th century, at the request of Kazimierz Krasiński. The current neoclassical form of the magnate seat owes to Merlini’s apprentice, architect Jakub Kubicki, whose named “Arkady Kubickiego ” is a part of the royal castle in Warsaw.

Contrary to appearances the castle next to the palace is the oldest building in the complex, at least in part. The oldest parts of the walls come from the 16th century. At the end of the 18th century, it was just a picturesque ruin, rebuilt and arranged, like the palace, according to the design of Kubicki.

Classicist in form, the manor house from the turn of the 18th and 19th centuries was once the central part of the farm, which also included a forge and quarters for servants. It was here that the property administration was based.

The hosts of the palace in Radziejowice had many guests: celebrities, including three Polish rulers: Zygmunt III Waza, Władysław IV and Jan III Sobieski. At the end of the 19th century, and at the beginning  of the 20th century, eminent Polish artists paid visits here:  Henryk Sienkiewicz, Lucjan Rydel, Juliusz Kossak and Józef Chełmoński. The last one was a frequent guest to Radziejowice, as he lived for a quarter of a century in the  neighboring Kuklówka and willingly visited Radziejowice to capture the beauty of the local landscapes on canvases.

Currently, in the palace in Radziejowice, you can admire the largest permanent exhibition of Chełmoński  works in Poland and mementos of the outstanding artist. There is also a gallery of temporary exhibitions and guest apartments. The entire palace complex serves as a Creative Work Center and all buildings have been adapted to this function. There is also a kitchen and two historical apartments in the castle, hotel rooms and a lounge with a piano for small meetings in the manor house, guest rooms on all floors, and a conference room in the smithy.

Cultural events take place here regularly, including one of the most interesting ones devoted to a regular in Radziejowice – the Summer Festival of Jerzy Waldorf. In 2019 it was held here for the 11th time.

You can use an accommodation offer and an excellent restaurant serving dishes from the old Polish and eastern borderlands. Guests are welcome to try local pastries with cheesecake at the fore.