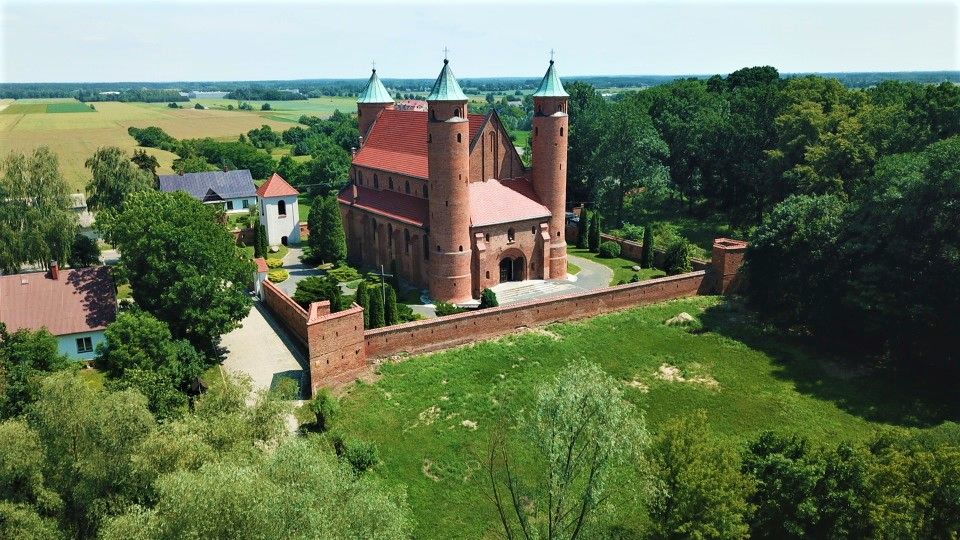 It is believed that a tiny boy who was baptized here in 1810, four years after his parents’ wedding,  saved the church. Certainly it is to him, on the occasion of the 200th anniversary of his birth, the church in Brochów owes its present excellent condition after renovation in 2008 – 2010.

It is only known that the first temple in this place was built of wood. We will probably never know what the first church built in this place looked like at the beginning of the 12th century during the times of Władysław Herman or the ruler of Mazovia after his death, Zbigniew.

The knowledge of the place we can learn mainly from the local legend. A long time ago in 1331, the German knight Andrzej of Dinheim came to Brochów. He was captured by the castellan Jan Sówka during the Battle of Płowce. While waiting for the ransom to be delivered, the knight settled down in Mazovia, and above all fell in love with the daughter of Jan Sówka, and the money for redemption, when arrived, he allocated to the construction of the brick church in Brochów. It was given to Miss Sówka as a dowry. This story is not confirmed by any documents, but there are many indications that the temple was founded by a knightly foundation. Perhaps by Jan Sówka himself, who became the progenitor for the Brochowski family, the owner of these lands.

At the first glance, the church of St. Roch and St. John the Baptist look more like a castle than a church. The present look is thanks to Jan Brochowski, who ordered a church modeled on the fortress. There are high walls and three towers like towers with shooting posts, connected from the inside by a porch over the side aisles. There is also a well inside the building in the sacristy. The church is surrounded by a wall with arrow slits and four bastions, allowing you to get to the temple area through one small gate.

The creator of this unusual form was Jan Baptysta from Venice, also known as Venetian, an Italian architect and builder who settled in Płock and created a studio that served practically the entire region. It is to him that Warsaw owes the barbican, the parish church of Płocka and the cathedral its Renaissance style, and the collegiate church of the Annunciation of the Blessed Virgin Mary in Pułtusk its beautiful form. The defensive form has never been of any use to the church. It was not foreign troops that turned out to be its greatest enemy, but time. Already a hundred years after its construction, the church had to be completely renovated!

Only World War I almost wiped put the historic church from the face of the earth. The church was on the Bzura line (the oxbow lake was supposed to protect the temple), where the front ran and the church was on the of objects under constant artillery fire from the fall of 1914 to the summer of 1915. The historic interior has been lost forever, only the outer walls have been reconstructed. It was not until the 1990s that funds were found for many years of conservation work. The beautiful interior, damaged during the World War I was successfully reconstructed thanks to a tiny child who was baptized in the church in Brochów on the 23rd April 1810. On the occasion of this 200th birthday, funds were found for this investment and the effects are to be admired today. The child was the son of Mikołaj Chopin and Justyna nee Krzyżanowska, who got married in the same church in 1806. Do we have to reveal the boy’s name?