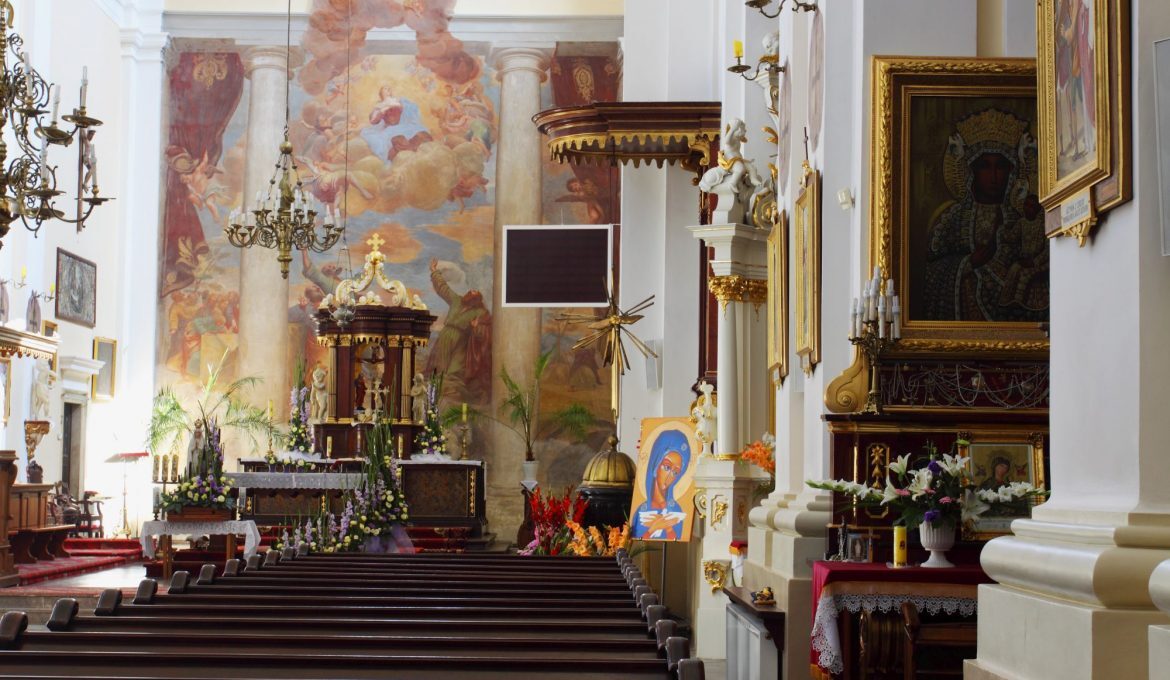 The interior of the Baroque Basilica of the Assumption of the Blessed Virgin Mary in Węgrów with frescoes by Michelangelo Palloni from 1707 - 1709, photo: City Hall

Węgrów fascinates with rich its culture and history dating back to the Middle Ages. Here, the present day is intertwined with a multicultural tradition created by generations of Poles, Jews, Scots and Ruthenians, who once lived side by side. A walk along the streets of Węgrów gives the impression of a journey in time through the 500-year history of the city.

Basilica, polychrome and a cursed mirror

The most valuable local monument is the minor basilica of Assumption of the Blessed Virgin Mary. The Gothic church for the 16th century, that stood in this place earlier, was burnt down by the Swedes in 1703 during the Northern War and rebuilt in the baroque style at the request of the owner of the city, the voivode of Płock, Jan Dobrogost Krasiński.

The most eminent representatives of the Warsaw artistic community worked on the construction and decoration of the temple, including the best fresco painters in Poland at that time, Michelangelo Palloni, who in 1707-1708 made 9 huge illusionist altars painted on the walls.

The famous “Twardowski Mirror” is hung in the sacristy of the basilica. A legend and tradition connects the mirror with the person of the sorcerer Jan Twardowski, who caused the specter of Barbara Radziwiłłówna for King Sigismund Augustus. Surrounded by the aura of mystery, the mirror is known throughout the country and attracts many tourists to Węgrów.

It is worth paying attention to the Baroque House of Gdańsk standing on the neighboring frontage of the Market Square, that houses a library and a mini museum with an interesting exhibition of Podlasie folk art.

Museum in the monastic basement

While departing from the Market Square, you can go along the Kościuszko Street that leads to the historic post – reform complex with a museum in the monastery cellars. The baroque church, presumably designed by the eminent architect Tylman van Gameren, was built in 1693-1706. In its dome, a beautiful fresco by Palloni, “The Triumphant Church” from 1710, is one of the artist’s greatest achievements. The main altar is decorated with a figure of Christ Crucified from 1693, carved by the eminent sculptor Andreas Schlüter. There is a crypt – necropolis, open to the public, under the church’s floor. The crypt contains the mummified corpses of nobility, town people reformed Franciscans and the founder of the temple, Jan Dobrogost Krasiński.

For many years, the revitalized monastery cellars housed the museum exhibitions “Węgrów – the city of many cultures and religions” (read more about the exhibition) presenting the history and cultural achievements of the communities inhabitation the once multicultural city: Catholics, Protestants, Jews and Orthodox. Arranged in stylish interiors the multimedia exhibition in an engaging way presents the colorful mosaic of the former Węgrów, the most important events and great figures related to the history of the city.

Traces of the historical diversity have been preserved in contemporary Węgrów. There are two Evangelical churches and a cemetery with stone Scots tombstone from the 17th and 18th centuries reminding of Protestant craftsmen.

In memory of the Jews from Węgrów and its vicinity, murdered by the Germans during World War II, there is a lapidarium monument at the Berka Joselewicza Street.

The most interesting monuments in the town have been divided into thematic routes. There are also the regional tourist routes that run through Węgrów; the Great Lithuanian Gościniec, the Liwiec River Canoe Trail, the Dukes of Mazovia Trail and the Liwiec Valley Trail. It is worth going on a 5-kilometer trip along the bicycle path to the interesting Armory Museum at the Castle in Liw, located in the historic complex from the 15th – 18th centuries.