Home ⁄ MUST SEE ⁄ PALACE OF CULTURE AND SCIENCE 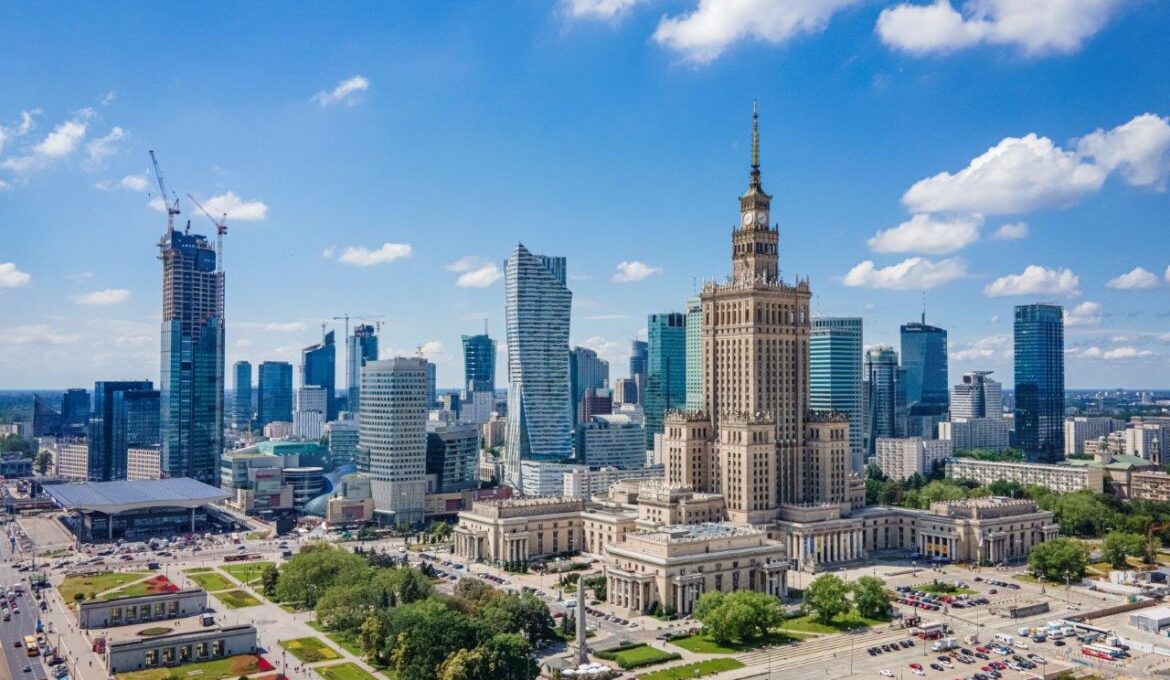 Some people cannot imagine Warsaw without it, while others see it “only” as a reminder of a bygone era. One thing is certain: the Palace of Culture and Science, located in the very center of the city, is an icon of the capital and the most famous office building in the country, as well as a cultural and entertainment center. “PEKIN” at the building Warsaw calls it is one of the tallest buildings in Poland. It is 187.68 meters high, and with the spire 237 meters high. Built in 1955 in the socialist realist style and inspired by the appearance of American art deco skyscrapers, for years it served as a meeting place for the Polska Zjednoczona Partia (more precisely, the Congress Hall located on the side of Emilii Plater Street).

The facade of the palace is clad with ceramic titles and sinter produced in a factory in the Urals. Sculptures in the niches around the building were also made in the Soviet Union. They present famous Poles: Nicolaus Copernicus and Adam Mickiewicz (standing in front of the main entrance), as well as allegories of philosophy,music and literature contrasted with the “new pantheon of muses”: including a worker with cogwheel, a kolkhoz woman, a builder, a miner and a mechanic.

To welcome the new millennium the second largest clock in Europe was installed at the top of the Palace on New Year’s Eve in 2000. The diameter of each of the 4 cloclas faces is 6.6 meters, and the weight of the dial with nads is 450 kilograms. It was then the world’s highest – installed tower clock. An interesting fact is that all the clock faces bear the Warsaw mermaid.

In the building visible from almost every corner of the capital, there are theaters, museums (the Museum of Evolution of the Polis Academy of Science and the Dollhouse Museum), the Kinoteka multiplex, cafes, including the popular Cafe Kulturalna and Bar Studio) andt the Warsaw Tourist Information.

The biggest attraction of the palace with the only one of its kind in Warsaw – the observation deck on the 30th floor at the height of 114meters. From it you can see the panorama of Warsaw, including downtown skyscrapers and the Praga bank of the Vistula River. In summer, the terrace is also open in the evening. It is worth considering seeing the palace interiors that are unique in the whole country – visiting the halls and corridors richly decorated with monumental socialkst realist decorations is possible only as part of a group tour. They are organized by travel agencies such as We love Warsaw, Mazurkas Travel, Adventure Warsaw and gdzienaweekend.pl

In summer, the vicinity of the palace becomes the arena of numerous concerts, theater and film shows. In turn, in winter,a great place for ice skating enthusiasts thanks to the ice rink with a skate rental. At night, the building is climatically illuminated and, for special occasions, additionally illuminated.

In front of the main entrance you can find astone honorary stand, from which the politicians of KC PZPR party greeted the participants of the May 1 Day parades.

Current opening hours of the observation deck, information on ticket prices, temporary exhibitions and special events can be found at www.pkin.pl

The PKiN is located in the very center of Warsaw. In the vicinity of the Central Railway Station. The nearest metro stations are Centrum and Świętokrzyska.

There are several Veturilo stations in the vicinity of the palace. The closest one can be found right next to the building, from the side of pl.Defilad.

You can use paid parking space around the palace.