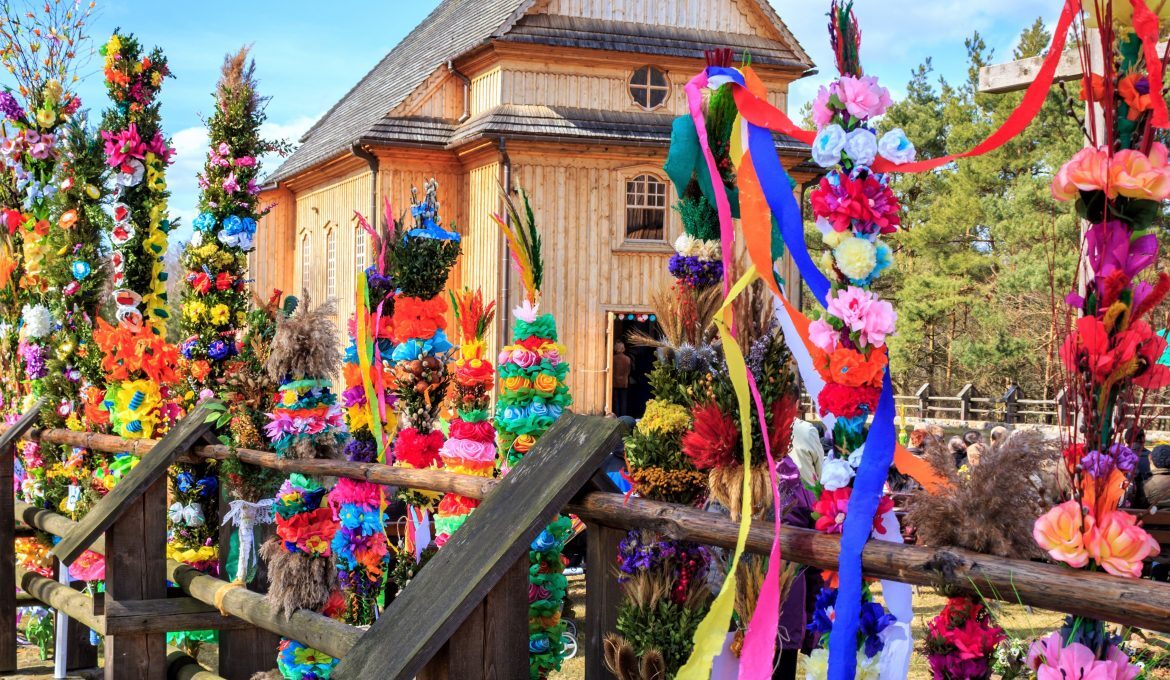 A severe “punishment for a herring for the seven lent weeks”, firing cannons and every possible popper for resurrection, walking with a rooster and a gauze – these are some of the Easter customs of Mazovia. They can be found in the five volumes of Oscar Kolber’s works devoted to our region, along with well-known traditions in every part of Poland, such as sharing a blessed egg on Easter Sunday or pouring water on Easter Monday.

Oskar Kolberg, was the greatest ethnographer of Polish folk life. He changed the perception of Polish folklore. Thanks to his research into rural culture, future generations have been able to explore the traditions and customs of the past. His legacy was also closely examined by the founders of the State Folk Ensemble of Song and Dance “Mazowsze”. Oskar Kolberd devoted most of his life to folk culture.

In 1839, he went on his first expedition around Mazovia and began documenting folk music, as well as  creating graphic notation of many folk songs. He was the first ethnographer  to divide Polish folklore into regions and described in his monumental work “The People”: Their Customs, Way of Life, Language, Folktales, Proverbs, Rites, Wichcraft, Games, Songs, Music and Dances.

Some of the Easter Masovian customs described by Kolberg:

The resurrection was announced very loudly: in the capital, in towns and villages, during resurrection, tar barrels were fired from cannons, mortars, organs, fusions and pistols through an empty barrel for great noise

In the ranking of most boisterous resurrection in Warsaw, the so-called Gnojowa Góra was in the lead of Saxons: “Similarly to his predecessors, August III attended a resurrection in the collegiate of St. John, artillery fired 300 times on the manure mountain (today Oboźna and Sewerynów Streets). The king was obese: only once did the church go throug procession”.

“On Easter Sunday, a blessed egg was shared, but before that, a special sport was practiced in Mazovia: running from the church to the lavishly set table”.

“In the villages, and in Mazovia as everywhere else, there is a custom of racing each other after leaving the church, so as to come home as soon as possible and eat the prepared holy food”.

Walks to Emmaus were practiced mainly in towns.

“In almost every town there is a favorite neighborhood where the people used to gather for entertainment, what is called: going to Emmaus, because on the second fest of Easter the church commemorated how Christ went to his disciples from Jerusalem to Emmaus. The people of Warsaw gather in front of the monastery of Fr. Bonifraters, where on this day it is allowed to visit the insane (whose facility is located next to the monastery)”.

“It is worth noticing the custom of riding with a rooster. In Mazovia, as in other provinces, on the second day of Easter holiday, farmhand puppets of a cute rooster (for which they usually take an empty pumpkin, having decorated it with feathers, capons in the shape of a rooster with a comb made of red cloth) and  attached to a slat, circle around  the village and wheels. The celebration begins at the manor house or the more affluent farmer, where the singing and playing on a pipe, he gains a monetary donation or a gift (then called dyngus), continues from the cottage to cottage, and ends in  the evening a the innkeeper, where the day’s purchase) is distracted by the noise and screams while drinking a glass. In the vicinity of Wyszogród and Czerwińsk, the cockerel was driven on wheels”.