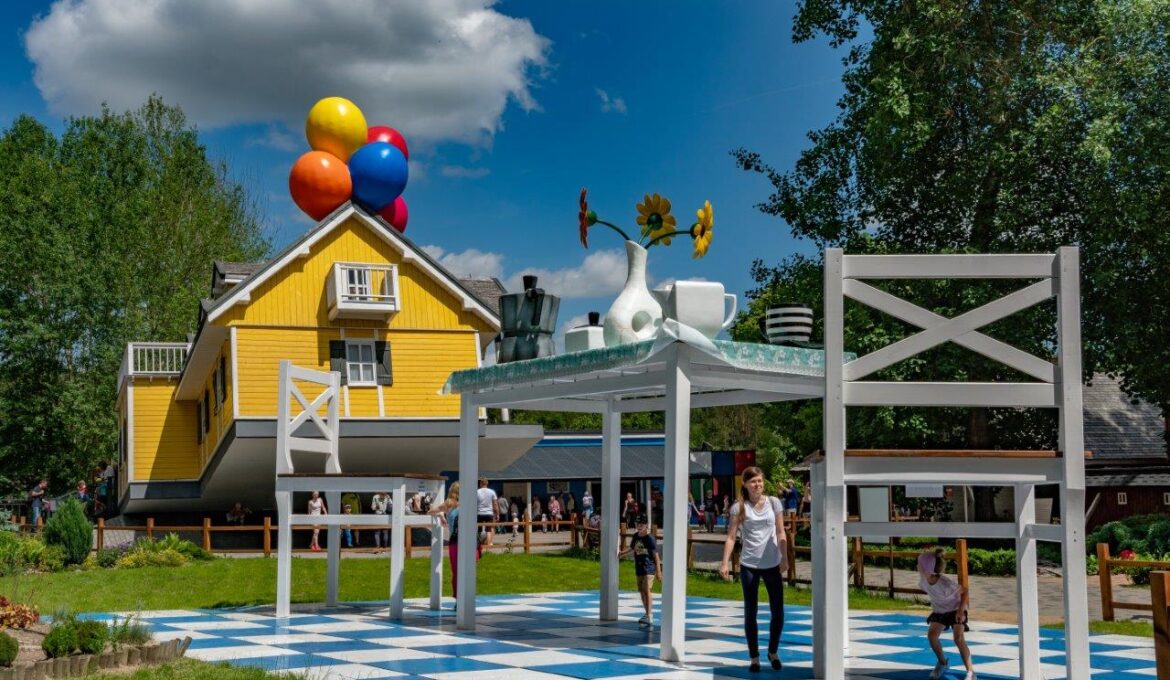 When your child suddenly hears the call of adventure and wants to become Indiana Jones, a mad scientist, Thumbelina or any of these characters at the same time, do not hesitate for a second. Just pack a few clothes for a change and go with your family to Mościska near Trojanów. It does not matter if you are coming from Warsaw, Lublin, Siedlce or Radom. After several dozen minutes you will find yourself in a place where every young adventurer will make his dreams come true, even the craziest ones.

Some examples? A treasure hunt in an old gold mine or wandering in the labyrinth of mirrors, visiting the wild dragons reserve or entering the fairy – tale shadow palace. There are over 60 different attractions at the Illusion Farm, as it is called, and one visit is not enough to get to know all of them. And during holidays, there are also daily performances by magicians! Yes, in July and August the farm is open every day and accepts both tours and individual tourists.

In the 2020/21 season,  there are several novelties at the Farm. Particularly noteworthy is the new attraction associated with the “Overturned Room” illusion, where you can take fantastic photos, having the impression that you are walking on the walls. Equally interesting is “Adventure on the prairie” that is a horse ride among the Indian scenery. The youngest guests can enjoy the “Island of Smile”, a very colorful funfair zone. There is also  something for lovers of new technologies. “Pufki rozrabiają” is an interactive smart phone game that combines outdoor activities with the viral world.

The new season starts on 22nd May 2021 and it will be an opportunity to see all the attractions after the shortened summer period due to the pandemic.

The Illusion Farm has been operating since 2012, and has already collected a considerable collection of awards, starting with the title of the Best Tourist Product of Mazovia. The most important, however, are the opinions of visitors who willingly return to Mościska, because their children have no chance to get bored here, even if it is the fifth visit in a row.

Every year there are new attractions, this season it includes a new parrot house that you can enter, and a 3D illusion gallery.

The most famous building and the symbol of the Farm is, of course, the Flying Hut of Secrets – a house partially floating in the air “thanks to” a bunch of balloons. Other unusual structures are the Tunnel of Oblivion, the Museum of Illusions, the Twisted House or the Mirror Labyrinth. One of the newer attractions is the Gold Mine. The underground corridors are reached by a real mining elevator, and the aim of the expedition is to solve the mystery of  the disappearance of a group of miners years ago. It is fun for really brave adventurers! There are also amusement parks: carousel, Free Fall Tree and the Dragon Railway, i.e. a mini roller – coaster.

During this holiday, each day at the Farm there is a chance to see a performance by an excellent magician. Amazing skills will be presented by Pan Ząbek, Maciej Pęda, Damian Spętany and Marta Jasińska. All attractions are included in the admission ticket price!

The only amusement park in Europe with illusion as the main theme.

MAGIC SHOWS AND FUN FOR EVERYBODY

During weekends, the scene at the Illusion Farm becomes a fairy – tale land. There is always something going on and there is no chance of boredom! The biggest attractions, among many others various performances and animations, are the shows of illusionists – Maciej Pęda and Damian Spętany and the best balloon twister in Poland – Patrycja Lipińska.

The Illusion Farm is not only a combination of a land made of fairy tales and extraordinary stories, but also a full set of entertainment for children, including more conventional ones. After all, not only the mind and senses have the right to exercise, the body must also go crazy. In the area of the farm, you can use a ropes course and climbing walls, as well as various playgrounds. During summer holiday, the “Cooling zone” opens its doors with swimming pools and a beach where you can have a picnic and relax after crazy adventures. Barbecue lovers will find the necessary equipment, as long as they did not take their own with them. You can also buy food and gastronomic products.

The Illusion Farm was created next to the village of Mościska in 2012 and it offered 15 attractions in the first season. Since then, it has been extending attractions and attracting more and more visitors.

The park has received a number of awards and certificates, including the Best Product of Mazovia from the Masovian Regional Tourist Organization, and the very prestigious Certificate of the Polish Tourist Organization. In 2019, the Farm took third place in the competition for the best attraction for children in Poland organized by “Dziecko w Podróży” website.

All attractions are included in the ticket price.