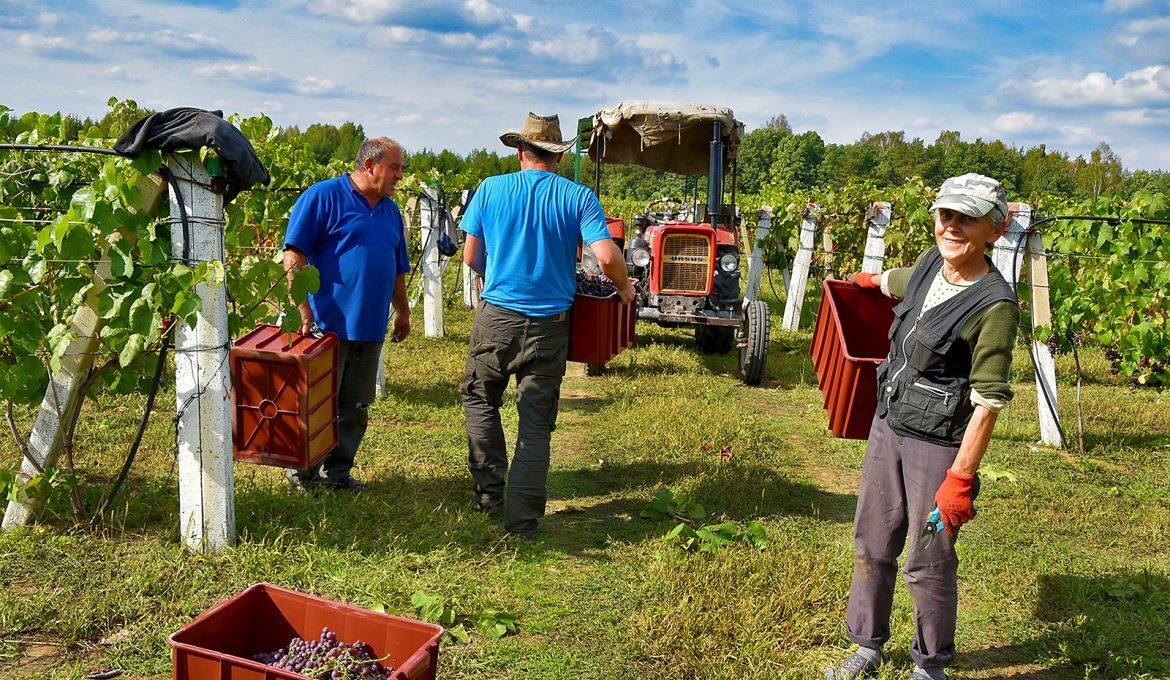 Grape wine, including Mazovia Red or White and fruit wines – from raspberries, blackcurrants and even Kamczatka berries – the Dwórzno Vineyard indeed hides many surprises. You can get to know them during a weekly tour combined with wine tasting. There are also jazz picnics, a two – day Wine Festival, and true wine lovers can even take part in the “make your own batch of wine” program!

The Dwórzno vineyard, run by brothers Wiktor and Oskar, was planted in 2012, but its history goes back much further. When in the 1990s the father of brothers set up a farm, he had no idea that one day it would become the largest vineyard in Mazovia. It all started with the great – grandmother, who was the last person to live in Dwórzno. Her daughter asked her son, the father of brothers, to buy a piece of land in her home town after her death. My father dreamed that the land would yield crops, so he bought 50 hectares of land on planted raspberries. The farm was cultivating fruit for export until 2012, when Michał Gmurczyk, a fruit – growing advisor and wine enthusiast, presented his wine experiments using raspberries growing there, and thus influenced the family with a passion for the production of noble liquors. At his instigation, the first 2 hectares of vines were planted, which with time grew to 6 hectares, making Dwórzno the largest vineyard in Mazovia and one of the largest in Poland. Currently, the place boasts an annual production of 50 000 bottles of wine that win medals at national or international competitions. On the farm in Dwórzno there are grapevines, raspberries, blackcurrant and Kamchatka berry growing. Quality wines with the utmost care are produced from these fruits and the vineyard itself hosts enotourists. That is something that even the great – grandmother of two brothers never dreamed of.

The Dwórzno Vineyard is a place open to everyone willing to learn about the history of the farm, the secrets of wine production and taking sommelier workshops, teaching proper tasting. This is why guided tours for individual guests are organized every weekend. The interest is so high that guests are scheduled a month in advance. Most of them arrive via word of mouth initiated by previous visitors. The flattering comments from guests who have become fans of this place and prefer to reach for beverages from the artisanal productions of Dwórzno, instead of wines from southern Europe, are extremely encouraging.

One of the most surprising stories is how the brothers got to know the current guide Łukasz. He is one of the three experts in the vineyard. Łukasz came to Dwórzno by accident, when in August 2020 he came by bike to get to know the farm and rest in the orchard next door. One of his hobbies is drone photography and this is what he also did there. Then he sent his pictures and recording to the brothers and in order to place them on the vineyard’s fanpage, saying that he is also interested in enotourism. It turned out that Łukasz is a young but experienced tourist guide and a wine enthusiast.  He quickly made friends with the owners, which was not difficult, especially considering the small age difference. He has become the person, apart from the Gowin siblings, who gives tours around the Dwórzno Vineyard. The honorable debut took place during the Wine Festival 2020 with 700 tourists becoming interested in it for two days. Flattering opinions on the Internet about Łukasz speak for themselves.

The farm in Dwórzno is situated in an unusual place. Just 40 km from Warsaw, “Masovian Toscany” and it is the closest vineyard to the capital. The village of Dwórzno is an ecologically clean place. The town, surrounded by forests and bordering the lake, is watershed that has been naturally cleansing for millennia. Thanks to these wonderful conditions and suitable soil the vineyard owners are proud of production of excellent quality wine, at the same time being a unique enotourism destination.

The region is called Wysoczyzna Mazowiecka and is the highest point in Mazovia, where five rivers originate: Mrowna, Wężyk, Utrata, Karczunek, Pisia Tuczna and Pisia Gągolina. The plantation rises about a five – hectare lake bordering it on the south. It is a beautiful area with a sculpted like, hilly surface, with a much desired southern exposure for grapevines. The vineyard is located near Wręcza, where the Park of Poland was recently built, the largest covered water park in Europe, that can be combined with a visit to Dwórzno.

Due to its landscape values, the area is an ideal place for bicycle trips, and cyclists can comfortably travel from the capitol to Mszczonów. The local forests are a real paradise for mushroom pickers, and animal enthusiasts will seek elk here. In the vicinity there are Mszczonów Thermal Baths, which, like the Park of Poland, are based on thermal waters.

Tourists can also visit Radziejowice Palace or one of the local cider houses, such as Cydr Ignaców,  and stay in one of the attractive accommodation facilities. A special place is the Riding Club Yke, an exclusive equestrian club where you can also keep your horses.

Grapevine growing, especially in such an inhospitable climate as the Masovian, is associated with a lot of unusual practices and extensive knowledge. The region is a blank spot on the wine map of Poland. Cold, windy and flat Mazovia is not an ideal place for cultivation of thermophilic shrubs. But how is it possible to grow grapevines in Dwórzno, the heart of Mazovia? The answer is special grapevines and the unique microclimate of the farm.

The so called  resistant strains of vines grow in the vicinity of forests that protect plantings from the wind. Undulating, which is at odds with the nature of Mazovia, the landscape has a gentle slope that allows the frosty air to trickle down the slope during May frosts, without creating frost stagnation. In addition, the 5-hectare lake is a local heat store, raising the average temperature in the area. The father of Wiktor and Oskar, setting up a farm here in the 1990s, had no idea that they had chosen a place ideally suited for a vineyard. The whole is complemented by strains such as Solaris, Regent, Johanniter or Hibernal, that perfectly withstand the dangers of cold and humid climate, and their resistance to diseases make it possible to reduce the number of spraying in the field to an absolute minimum and thanks to that fantastically natural fruit can be obtained. The grapevines root up to 15 meters into the ground, which translates into the amazing and original minerlity of the wines. The plantation is protected against pets by hawks, and from the May frosts, it is saved by the misting system observed at fruit farms, that covers the strains with water mist from a deep well.

In addition to the weekend tour of  the vineyard, the owners also organize unique events. Ticketed jazz picnics take place several times a year for elite group of guests who wish to get to know the vineyard and can watch the performances with outstanding jazz musicians in the bosom of nature in the old orchard.

Every year, at the beginning of September, the Wine Festival is organized, i.e. a two – day open – air event with free admission for the whole family. The program includes music, theater, acrobatic and animation for children.  There is also an hourly guided tour of the vineyard.

The Dwórzno Vineyard offers high quality grape and fruit wines. It produces single – strain wines and coupage wines from varieties such as Johanniter, Solaris and Regent. Single strain wines are named after the grape variety, while coupage wines are named Mazovia Red or White. In addition, the offer includes quality wines made of fruits such as raspberry, blackcurrant or even Kamchatka berry. Fruit wines are made from the maceration and fermentation of about 1 kg of fresh fruit from the plantations on wine yeast, providing an euphoric taste sensation. Wines are available for individual guests, visitors to this place and for selected points from the HoReCa industry. Gift sets for various occasions for companies and individual customers are also very popular.

Visiting Dwórzno Vineyard takes place every weekend all year round, even in winter. The program requires about 2 hours and includes learning about viticulture in Poland, walking around the vineyard, visiting a processing  plant with an overview of the production process and tasting 5 types of wine with sommelier workshops. You can give the vineyard ticket as an elegant voucher. Sightseeing takes place regardless of weather conditions, as most of the attractions are located in the processing plant.

For the most demanding wine enthusiasts, an unusual experience has been prepared, i.e. the program “Produce your own batch of wine”. The event lasts 4 hours and includes participation in the actual work in the vineyard. It is tasting young wine straight from the tank, work and clarifying and pouring, aroma recognition workshops and wine measurements. The experience is crowned with self- bottling and labeling of 6 bottles of wine, that can then be personalized and taken home as an extraordinary souvenir.

A separate activity is event services provided for companies both on site (for groups of 5-300 people) and in the travel formula. During the events organized, attractions include: visiting the vineyard, and processing plant, wine tasting, sommelier workshops, workshops and sensory analysis (recognizing aromas from special vials), and bottling your own wine, and even dedicated occasional labels. On request, it is possible to set the stage as well as food and transport. As part of other event activities, the offer includes wine presentations on Polish or foreign wine, refreshments during the event and commented dinners accompanied by a local drink.

Dwórzno Vineyard is a family farm run by two brothers – Wiktor and Oskar.

Wiktor, 10 years older than his brother, is a financier by education. His analytical mind is at ease in the complicated process of vinification. In his spare time, he is interested in sports – he has run three marathons and has the license of a snowboard instructor.

Oskar graduated in journalism. He took his first professional steps in the editorial office of Super Express and in Agora Publishing. In the vineyard, he is responsible for advertising and social media. His passion is music – he regularly goes to concerts and plays guitar in his band. Like his brother, he spends a big part of his life on sports.

Wine is a common passion of the brothers.