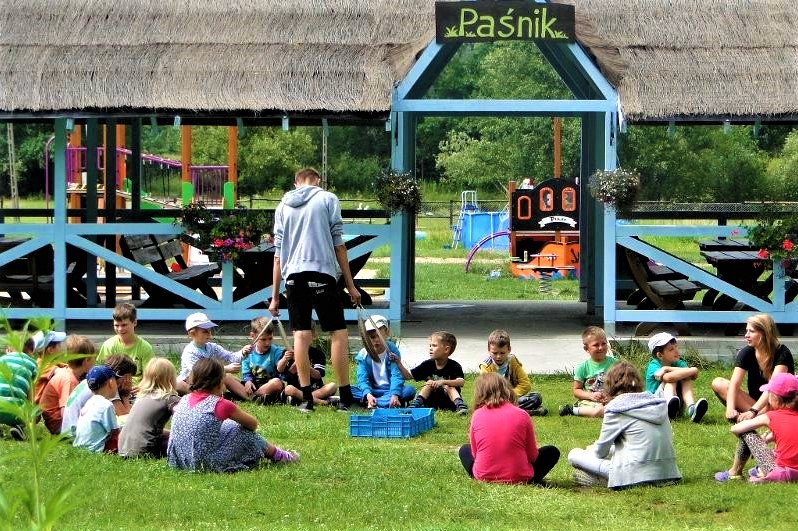 The owners of the farm, Agnieszka and Jerzy, meet the best in their lives by a coincidence”. “Pod Kogutem ” village was also a coincidence. They bought a beautiful area of 4 hectares, located in the Chojnów Landscape Park, near Warsaw, 12 years ago while they were living in Spain. They bought it from the Poles living in Paris and did not mean opening an agritourism farm for the inhabitants of the capital. Everything happened by accident, from a small bar for guests to a thriving tourist facility. Together, they agreed that the educational and entertainment offer of the facility would be addressed to families with young children.

They want to show the visitors how it used to be in the countryside, so they breed animals. In addition, there is a large zoo to make the place more attractive. At the “Pod Kogutem” Village you can see a collection of old agricultural machines that the owners’ grandparents used while cultivating  fields not so long ago, and eat a good meal in the local restaurant.

A few years ago, the Cepeliada was held at “Pod Kogutem” Village, attended by many famous folk artists. The exhibitors liked the atmosphere of this place so much that they decided to present some of their works to the hosts. Among them were carved figures of roosters that became the beginning of the collection gathered by the hosts. The rooster has become the symbol of the village, and a large 2.5 x 3 m sculpture of a colorful rooster welcomes visitors to the village and everyone takes commemorative pictures with it.

The zoo, known in the area, often accepts animals that, for various reasons, have to leave the homes of their current owners. They include, among others, rabbits, cats and other pets. Once, the hosts received a phone call asking if they would accept the mumps. They agreed as they were convinced that they would receive another guinea pig to raise. Imagine their surprise when it turned out that the pig in fact weighs at least 150 kg and is an overgrown Vietnamese pig, for that it was necessary to build a separate pen. The animal known later as the Peach Pig has made a home in the village for good and has become one of the village favorites.

At the beginning of its operation, the village zoo presented mainly domestic and farm animals, well known to the local residents. Once, however, well – served camels found their asylum here after many years of entertaining in the circus. Both were of the right height and of great stature. One can only imagine how surprised a cyclist  was – passing by, who at the sight of huge  Bactrian camels walking behind the fence, stared at them so much that they “landed” in a huge clump of bushes growing by the bypass. Fortunately, he did not get injured and the adventure ended with only minor scratches.

“Pod Kogutem” Village is located in an interesting area in terms of history, nature and sightseeing. Interesting urban centers in the area are Góra Kalwaria and Piaseczno, The origins of both cities date back to the Middle Ages, and the rich history has left many valuable monuments there.

Góra Kalwaria is known for its unusual urban form – the original streets layout from the 17th century based on the Latin cross plan, created on the basis of the medieval plans of Jerusalem and the related system of  Kalwaria roads. At that time, it was granted city rights and the name of New Jerusalem. In the 19th century, the city became one of the most important centers of Hasidism in Poland and this is where the famous Hasidic Ger dynasty and its eight generations of tzadiks originate. To this day, you can see the Alter synagogue and the Jewish cemetery there. While in Piaseczno, it is worth visiting the church of Saint Anna, a hospital from the time of the Warsaw Uprising or a historic fire station of a volunteer fire brigade. A real attraction is a ride along the 30-kilometer narrow-gauge railway, ending with a fire bone or a visit to the western town of Wild West City.

You cannot miss a visit to the castle in Czersk, that invites you to see historical reconstructions, knight tournaments and the Night of Horror.

The surrounding natural attractions include  the Chojnów Landscape Park waiting for cyclists and the Nordic walking enthusiasts and nature lovers. The nearby Zimne Doły forest recreational complex invites you for a walk by the lakes, which can also be viewed from the covered observation tower. A large playground and the Rope Adventure Park await children. If you are driving from the Village “Pod Kogutem”, you can reach the health resort in Konstancin – Jeziorna with a beautiful park and a graduation tower. The Jeziorka river flowing through Łoś, Konastancin and Piaseczno, still wild and undiscovered, awaits canoeing enthusiasts. There are several routers of different length and there is a kayak rental with professional service.

There used to be an inn in the village in the 14th century where weary travelers could rest, eat a nutritious meal and exchange horses for further journeys. This proves that this place has always been ideal for travelers looking for rest and good food.

During the demolition of the old buildings, an elderly man from the neighborhood showed up on the site with shovels and hammers in search of a treasure. According to their stories, there was an old legend among the inhabitants that the treasure of a wealthy heir was buried under the main chimney. Unfortunately, no gold coins were found. Instead, dozens of huge stones were found that once served as foundations, and now serve as garden decorations and remind of the history of the place. In addition, a pair of very old agricultural machines and devices for everyday use were discovered in the farm buildings, that the village guides proudly tell their guests about, explaining what they were used for, how they looked exactly and how they were used correctly.

And in the nearby distance:

1. The ruins of the castle in Czersk, where every year a Knight’s Tournament is organized with duels for medieval white weapons, horse and archery shows, plebeian games, a historical fair and a medieval knight’s camp. Everything was recreated by knight brotherhoods and reconstruction groups from Poland and abroad. During the tournament, you  can visit stalls of old craftsmen, take part in workshops and taste medieval cuisine.

2. The Botanical garden in Powsin, where numerous photo and art competitions for plants enthusiasts take place every year.

3, Konstancin – Jeziorna, where you can take healing air in graduation towers, and there is a concert place where in the summer numerous concerts are held regularly.

On the agritourism farm at the Village “Pod kogutem”, guests have the opportunity to take advantage of many attractions and spend their free time in nature within the Chojnów Landscape Park.

There is a conference room, restaurant, guarded parking, sports ground, common room, board game, a barbecue, a bonfire place and lots of healthy forest air. The facility is safe, located away from the hustle and bustle of the city. Children can use pirate playgrounds, trampolines, swings, playgrounds and huge space for games, as well as get familiar with farm animals in the mini – zoo. There are horses, ponies, donkeys, llamas goats, sheep, cows, fallow deer, mouflons, arui, pigs, rabbits, coats, turkeys, geese, ducks, peacocks, guinea fowl, quails, pigeons, emus, chickens and roosters, turtles. You can listen to the ever- hungry goats or sheep, stroke the bunny or ride one of the ponies. The accommodation part of the agritourism farm consists of comfortably equipped year – round rooms, 2 rooms, the Łowicz cottages and farmer’s apartments. The decor of the rooms and the restaurant is kept in rural style with the walls painted in colorful striped patterns from the Łowicz area.

The village offers family packages with accommodation of relaxation with workshops and  animations for the whole family, such as Holidays in the countryside, Family New Year’s Eve, May weekend in the countryside or Easter. Thematic workshops include washing and felting sheep’s wool, baking wheat rolls, making candles from wax, making butter and white cheese using the old methods, grinding grain in querns and numerous art workshops. All animations are held under the supervision of professional and smiling animators.

The Village “Pod Kogutem ” is owned by the harmonious family of Agnieszka and Jerzy Drożdż, who have been developing this beautiful place with passion and commitment for many years.

Agnieszka, the interior designer, is the main decorator and performer of original exterior arrangements and guest rooms.

According to her idea, a charming restaurant was created, gracefully named Kokoszka – pleasing eyes with its colors.

Agnieszka and her younger son Maurycy, a student of the gastronomic technical college, are responsible for preparing meals with a varied menu. Hand – made decorations, embroidery and macrame add an idyllic atmosphere to the interior.

Jerzy is a visionary man with a head full of ideas. His creativity is developing the village, enriching it with new attractions. Jerzy tries to make the place an ideal haven for animals living here and a  balm for the souls of all those who seek peace and contact with nature. His right hand man is his older son Amadeusz, who modernizes and promotes the center in social media, acquires new clients and trains animators working with the youngest guests.