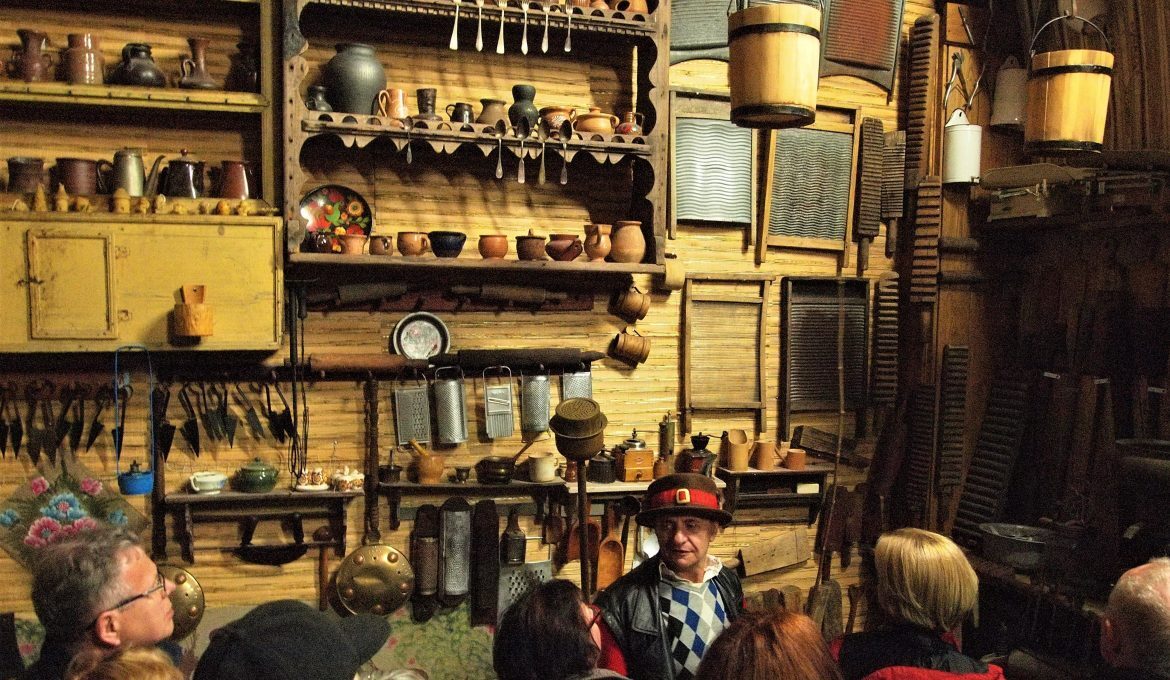 Accommodation and delicious Kurpie dishes, beautiful surroundings and folk museum behind the wall. A brilliant idea, a great plan and a lot of work is not enough – places such as the farmhouse in Wach are not created without love. Here you can  discover it, feel it and even get infected with it as well as return to your world with new energy.

Laura’s husband, Zdzisław is a native Kurp, the so-called “pniok”, fascinated by the history of his region, folklore and the local small homeland. In 2001, when the couple met and got married, they decided to live together in his native village in Wach, near Kadzidło. The beautiful surroundings and the old farm inherited from her parents-in -law charmed Laura, a city girl with a village familiar only by pictures and movies. She felt that it was her place on earth. She was not deterred by the lack of hot water in the tap, heating with the stove and cooking on the hob, or the 3- kilometer hike to the nearest store and other rural “attractions”. However, the daily commute of several hours to work was a torment. So they decided to abandon it and live off selling their own handicrafts.

They are both folk artists – Zdzisław deals with amber, Laura with lace and ritual arts. They also welcome guests wishing to learn the secrets of their professions. The idea turned out to be successful, more and more people came, so they decided to register an agritourism farm. They have expanded their offer and include regional cuisine, joint trips to interesting places, stories about  history of the region and began to save the remains of the Kurpie heritage.

This need to preserve the tradition turned into another idea – the creation of the Kurpie Museum in Wach in 2009. After years of hard work, the museum has become a showcase of the entire Kurpie region. And for both of them a meeting place with interesting people, their passion and a wonderful way of life.

Laura remembers the arrival of the first tourists who chose boarding accommodation and learned how to make tatting lace. It was an older couple, who did not mind anything – even the night cry of a then 1- year-old daughter. The hostess was accompanied by enormous stress that turned out to be unnecessary. That was a success, and Laura courageously began to open up to people. A few years later, the farm hosted a group of children from Warsaw who attended a “green school”. The hosts, together with the children dug amber, arranged green bouquets, and played in the old, forgotten village games. The teacher was so delighted that she decided to come back to Wach with her own family  – camping for the first time in her life. Agnieszka and Bartek together with Gabrysia and Filip spent a couple of weeks here and became friends of the hosts. They visited them several times, and each year, cards with Christmas greetings drawn by their children decorate Laura’s kitchen.

Very nice memories are related to the opening of the museum, which was preceded by months of work and visits to nearby farms. Zdzisław was collecting old, unnecessary household, farm equipment, as well as repaired, maintained and arranged exhibitions. Their neighbors doubted and doubted the idea of creating the first private cultural institution in the region. And then there was their delight when they could show their own bed, wardrobe, trunk, wagon –  beautifully restored. And in the following years, the farm hosted relatives who often lived overseas to see the cradle where the grandfather slept or the looms on which her great-grandmother was weaving the rugs. The owners of the museum were listening to stories related to the memories of the difficult life in the Kurpie countryside, that came to life at the sight of equipment that had not been seen for a long time or the joy of childhood spent with a large family and working together.

Kurpie is a picturesque area in the north – east of Mazovia, rich with forests, swamps, peat bogs, unregulated rivers, meadows, pastures, with a very poorly developed industry. It has largely retained its natural and original character. People also cultivate the Kurpie tradition inherited from their ancestors, so you can still listen to the local dialect and meet many folk artists who create cut-outs, sculptures, instruments, embroidery, lace and tissue paper flowers.

The village of Wach is located in the heart of the Kurpie Forest, surrounded by numerous forests, meadows, fields and swamps. The extraordinary natural values of this area have been appreciated and given special care in the form of two reserves: Podgórze and Karaska. You can meet here: deer, roe deer, wild boar, foxes, polecats and badgers, and the sky soaring owls, woodpeckers, cuckoos, blackbirds and white storks. The rich undergrowth of the forests is rich in blueberries, cranberries and mushrooms. The Karaska bog is one of the largest continental bogs in Poland. Due to its inaccessibility, it is a mainstay of elk, deer and roe deer and the birthplace of their young. Rare species of birds can be found here: European roll, black grouse, crane, common snipe, corncrake and kestrel, as well as reptiles: lizards and viper, and amphibians: common toad, grass and green frogs. There are plants that are disappearing in Poland, for example the round – leaved sundew.In Kadzidło, 10 kilometers away, it is worth visiting a small open – air museum “Zagroda Kurpiowska” and a neo – Classical church with a beautiful organ, and in nearby Myszyniec, an 18th century brick belfry with chains for displaying unfaithful wives and convicts in the wall.

Amber necklaces were a necessary component of the dowry and their value was converted to “cows” (1 string – 1 cow). Among the beads, at least one with the so-called inclusion had to be found to ensure that the owner had later sons, not daughters.

According to Kurpie legend, amber was created from the tears of people dying during the deluge sent by God, and its color depended on human sinfulness. Hence, no ornaments were made of dark or black amber, only incense was burned in the church. The chamois beer takes its name from a chamois – a juniper rod used to drive cows. It is a non alcoholic drink made of fermented broth of juniper berries, with the addition of honey, straw – colored, very refreshing and aromatic. The most popular dish served in all restaurants and at folk festivals is rejbak – a local version of potato cake, that got its name from “rejbowanie”, or as it is described here the activity of grinding potatoes on a grater.

Apparently,  Jan of Kolno was born in the village of Serafin by the Krusko Lake. He is believed to have reached North America 16 years earlier than Columbus.

The calendar of folklore events in the region is very rich. Fans of folk music, handicrafts and cuisine come to Łyse on Palm Sunday, to Kurpie Wedding in Kadzidło, Honey Harvesting in Wykrot near Myszyniec, The Cut -out Day and Kurpie Trail in Kadzidło, Darcie Pierza in Lelis and many others.

The huge advantage of the small agritourism farm “U Bursztyna” is the Kurpie Museum in Wach, that was created on its premises. Over 15 000 exhibits have been collected here, representing almost all areas of the Kurpie, are divided into sections: weaving, amber, carpentry, shoe making, raiding, at  home, in the yard, beekeeping, clothing, blacksmithing, forest, stable, crafts and the Kurpie library. A huge amount of the collected items are memorabilia of everyday life and celebrations, as well as family memorabilia of donors, saved from destruction. The Kurpie Museum is the largest exhibition of the Kurpie region in the area of Kurpie Zielone. The oldest exhibits came from the beginning of the 17th century (the Swedish cannonballs found in Myszyniec), and the new ones come from the 1970s. The museum has a very rich educational offer, and some classes are conducted using authentic museum exhibits. It  is only possible in a private museum. You can attend thematic lessons here: digging amber, the Kurpie amber processing, making flowers from tissue paper, postcard and occasional card production, tatting lace, linen – combing, weaving, making Easter palms, Easter eggs, folk herbalism, village toys, washing and mangle, jewelry making, as well as traditional regional cuisine classes that are becoming more and more popular.

For those willing, it is possible to prepare the Kurpie feast with traditional regional dishes, such as chamois beer, home- mad bread with lard, fafernuchy, rejbak, łagodniak and drożdżaki, described in the cookbook “Biesiada Kurpiowska” by Laura Bziukiewicz. She has collected 69 recipes based on the memories of the oldest female inhabitants of the village. The book has also been translated to English to make serving foreign guests easier.

Zdzisław is a passionate historian and a great guide around the region, that is why he willingly accompanies guests in their travels around the Kurpie, guiding and showing interesting places, not only those described in books, but also associated with the local heroes or legends known only to “indigenous people”.

There is also a small shop on the farm, where you can buy hand – made amber, tatting and crochet lace, Kurpie Eggs and other beautiful souvenirs as well as guides and maps of the region.

The agritourism farm and the Kurpie Museum in Wach is run by the married couple Laura and Zdzisław Bziukiewicz, with the support of their children – Lilia, Paweł, Piotr and Adam, who are still at school, but willing to help, especially with cleaning.

Laura is a folk artist who produces tatting lace and ritual art. Zdzisław is a native of Kurpie and a folk artist in the traditional processing of amber. He belongs to the third generation of amber craftsmen, and slowly passes the secrets of the profession to his sons. They are both passionate about the old Kurpie culture, lovers of good cuisine and keepers of tradition.