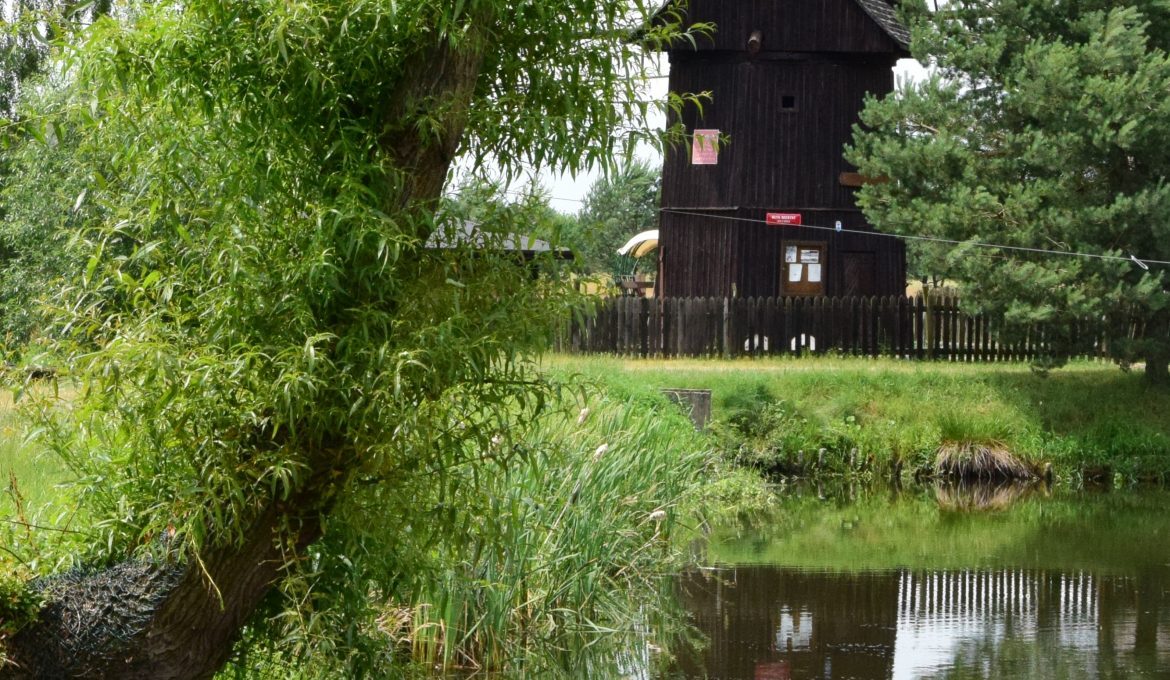 When describing the idea of life in the countryside of the owners of Gościniec Wiecha, one should start with the fact that they inherited a 6-hectare plot from their grandparents in the village of Kawęczyn. The first owner of the plot and the company was born on this farm in Kawęczyn. Although he later lived in Warsaw, he was always eager to come to his grandparents for holidays, harvest and family gatherings. He loved this place so much that when it became possible to move to the countryside, he did so enthusiastically. He wanted to tie the future of the family to the land of the ancestors. The decision was difficult but the right one. Today, everyone lives in the village: 94-year-old grandmother, her son – the current senior of the family with his wife, their children – the daughter with her husband and seven grandchildren, and the son with his wife and three grandchildren. The youngest study or work outside the village, but there is hope that one day they will continue the activities of their parents and grandparents. In the past, a large family with friends would very much like to spend their holidays andfree time on a charming plt with forest, meadows and orchards. When thelaw on economic activity entered into force at the beginning of the 1990s, an idea was born to link the future of the family with working in the countryside. The advantage was the plot, tourism and hotel education, the idea and the willingness to work together in the family business. At first they started with small steps. They built a bread oven, they brought in old querns, wooden rakes, plows and other agricultural implements to cultivate fields and make bread. They prepared a program of excursions for children and adults. The increasing number of guests required more land, so they bought land and extended the farm to 26 hectares. Fish pond, pastures, a farm with animals, a small open – air museum were built, 2 windmills were brought, a water mill and many other attractions were built. Next, the family went in the direction of showing disappearing professions and continues to develop the road with passion.

Many national and international companies have organized their events here during the long activity of Gościniec Wiecha. The hosts are especially fond of 2006 year, when a meeting of farmers from all over the world took place for the presentation of agricultural equipment. On the occasion of its 45th company anniversary, John Deere company chose the inn to host folklore evenings because of, as they put it, the authenticity of the place. During the events, the whole family, inhabitants of the village and friends dressed in national costumes helped. The whole village was involved in the event to best recreate the rural climate. There was a tasting of home – baked bread with lard and a pickled cucumber, homely grilled food, horse- drawn cart rides, chopping wood, grinding grain and milking a goat. There were also demonstrations of baking bread, shoeing and other attractions such as washing on a plate in the river, collecting hay in a meadow and other farm work. It was a real return to the past and a great integration of the family, villes and farmers from all over the world. A real transfer to another reality and revival of the old village. Memories and photos from this event have become the pride of the hosts, and  the song of Golec brothers: “Pole, pole, łyse pole” has become their favorite ever since.

The hosts also remember a visit by a group of foreign guests with the main attraction of churning butter competition. Years later, one of the guests, under completely different circumstances, returned to the road on a different trip and insisted very much on repeating the experience, even though it was not on the agenda this time. Until then, he kept asking, showing pictures and recalling the previous visit, until he asked…. As a souvenir he got his own butter.

The hosts’ favorite places are related to the facilities lying on the road. First of all, there are two beautiful windmills and a mill built on the tributary of Jeziorka, a reconstructed classroom with all its attributes and a chapel built especially for the beautiful figure of the Virgin Mary bought by a senior family at the flea market.

Also worth recommending is a beautiful wooden church in Rembertów. Saint John the Baptist, built in the years 1730 – 1742 from the foundation of Antonina Siekierzyńska. The illuminated church building with the belfry and the presbytery illumination make an amazing impression and give this place a unique atmosphere.

Another unique place is the Sanctuary in Pieczyska, where, according to legend, the Mother of God going to Pieczyska left an imprint of their foot in a field boulder.It is also worth visiting the ruins of the medieval Gothic Castle of the Dukes of Mazovia in Czersk, built by the Prince Janusz I the Elder at the turn of the 14th and 15th centuries on the site of an earlier stronghold. Although it has been heavily damaged over the centuries, its Gothic towers and walls still attract history lovers. Magnificent views of the Vistula valley as well as the open space and silence encourage you to relax.

Wiesław, the senior of the family, has been painting saints and other figures carved in wood for many years. Currently, there are around 400 outdoor sculptures on the farm. Another curiosity here is an exhibition of over 1100 paintings collected with passion from various places, and this exhibition is affectionately called “the gallery of kitsch” by the hosts. The proof of its popularity among guests, to the great concern of the owners, is unfortunately, the systematic “disappearance” of the paintings.

A local curiosity in undoubtedly the traditional market held on Thursday in nearby Grójec. A huge attraction in the area is also the castle in Czersk, where a series of events under the slogan “Historia Viva” takes place throughout the season – everyday life, as well as war and peace in various historical epochs are presented in subsequent weekends: 14th century –  represents the group of the knight Miecław, the starost of Czersk,  that is interesting facts from the life of the guardians of the town of Czersk, events  take place in June and September.

16th / 17th century – a comparison of the Golden Age versus the Age of War is a look at two faces of history prepared by a group of Meluzyna reenactors. Secrets of Queen Bona’s fraucimer and secrets of the royal archer and soldiers’ armory are included in  the program. The events take place in June, July, August and September.

The 9th – 11th centuries are the times of shrines, and encounters with the early Middle Ages – camp, craft, woodcarver and Slavic Temple and food. The events in June, July and August.The 10th/11th century – archaeological picnic, the past with experimental archeology with hosts of the castle warriors, peasants and women. The picnic takes place in August.

The Gościniec Wiecha is a family business established in 1991. It is an extremely charming place, inextricably linked with the Polish folk culture. The Gościniec, located in the village of Kawęczyn, 30 km from Warsaw, covers the area of 26 ha. In the immediate vicinity of the Chojnów Landscape Park, among picturesque orchards of Mazovia land, the building of the road is perfectly integrated into the surrounding landscape. In front of the guests there are: an old peasant farm with an ethnographic room where bread is baked, two hundred – year – old windmills, a chapel, water mill, spacious wooden banquet shelters for up to 800 people, a forge and stable with animals. All buildings and their surroundings are decorated with original decorations, appliances and devices related to the tradition of the old Polish village. The vast, illuminated and fenced area offers guest countless entertainment: an authentic open – air museum, forests areas with fallow deer, ponies, goats, sheep, recreational ponds, horse riding paddock, sports fields, playgrounds, a stage an autocross track with vehicles, coach parking lots and sanitary facilities.

The wide educational offer targeted at children is also noteworthy. Extremely popular are the “From grain to a loaf” classes, bread baking workshops, Christmas Eve traditions in Masovian villages, pottery and presentations of disappearing professions such as farmer, miller, baker and blacksmith. At present, the offer is directed mainly for groups.

Grandma Cecylia is the good spirit of the enterprise that started it all. Wiesław – the current senior of the family, willingly paints sculptures and preserves the equipment that he collects when buying at antiques fairs. A homebody who does not see the world outside of Kawęczyn. An avid collector of paintings, irons, agricultural tools, pots, birds, who can tell an interesting story about each item.

Barbara is the wife of Wiesław, whose greatest passion is traveling and observing examples of good practices in the field of guest service in various places around the world,

Jakub – the son of Wiesław and Barbara, born manager, most involved in the maintenance of the facility and care for the aesthetics of the road area.

Katarzyna, the wife of Jakub, deals with contact with client and takes care of the company’s marketing

Maksymilian – the son of Jakub and Katarzyna, wants to continue the family tradition of working on the road.

Piotr – the son-in-law of Barbara and Wiesław, the owner of a guesthouse and the room for special events,

Katarzyna – the wife of Piotr, daughter of Barbara and Wiesław, is working with her husband