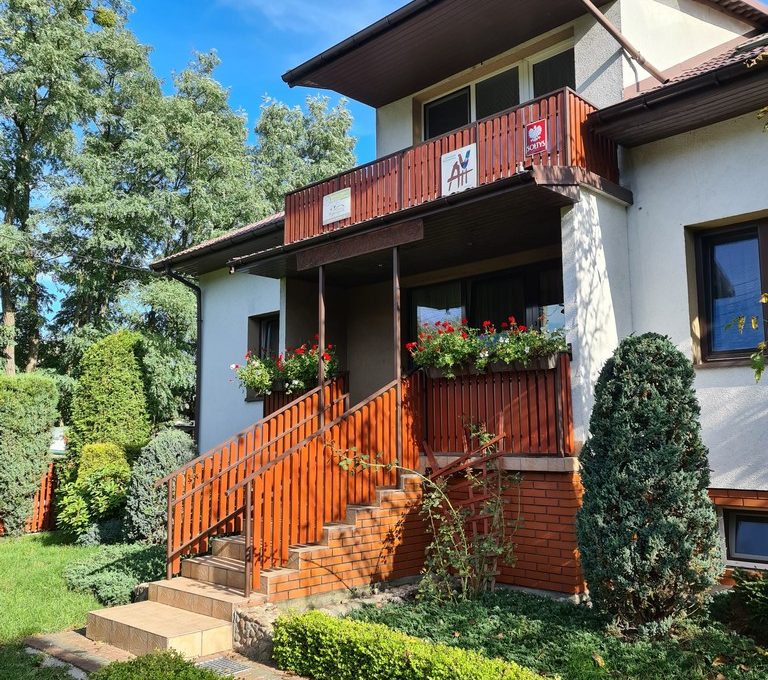 The “U Ani” agritourism farm was created 12 years ago. The idea had to wait for a long time from the 1980s, and the inspiration was a large house where Ania and her brother stayed as the two of seven siblings. Initially, Ania ran a shop in her house, then she invited her first guests into her quarters. Contact with the first summer guests has lasted for 30 years. At that time, the farm was not yet ready to run agritourism service. There were a few obstacles: continuous modernization of the farm, its expansion and renovation, purchase of equipment, caring for Ania’s son, running a shop and helping addicts, that is Ania’s passion.

In the new century, the idea of running an agritourism farm came back. In 2006, Ania submitted an application form “Diversification into non – agricultural activities” and received fundings. In August 2008, the first guests came to the farm, and 2009 the facility received the first prize in the “Beautiful Farm House” competition in  the Garwolin powiat.

Ania is constantly expanding her knowledge and developing her agritourism farm using various sources of financing. The measure of success is also the fact that since 2014, Ania has been reelected three times to the Managing Board and is the President of  the Mazowiecko -Podlaskie Stowarzyszenie Agroturystyczne.

Many guests of the agritourism farm “U Ani” return even for the next few years. When asked what attracts them to this place, they answer that, first of all, the “real village”they find here. And this aspect is what children like the most. The children are happy to help with simple farm tasks –  they help with the grazing of goats and cows, they want to collect eggs from the hen house every day, they try to manually milk goats and cows, because it turns out that milk is not only from a carton…. Cleaning the coat, combing the mane and then riding a pony is an absolute hit. This is what they like best.

Guests can sign up in the guest book. You could quote many entries, but one of them attracts particular attention, because you can read that the agritourism farm as a form of recreation in the countryside is not only a bed, room, cottage and good food in the countryside, but also meeting the hostess. This is certainly evidenced by the following entry: ”This House has a soul, and its soul is Ania, full of goodness and love….”.

Ania’s victuals and everyday dishes often have a beneficial, health – promoting effect on her guests. This is due to the fact that they are made of natural products from the farm, grown without pesticides and made without preservatives. Children love fresh curd and cheese made of goat and cow milk. And even the most fussy eaters will not resist the taste of fresh zucchini pancakes and other ones made by Ania. Parents and grandparents are surprised and delighted with the appetite of the little ones and cannot praise the local cuisine of Ania.

There was also a case that one of the ladies who stayed at Ania’s farm had enormous health problems, probably caused by poisoning her body with food chemicals and pesticides. Here, she began to carefully eat topical, healthy food that she had not eaten in two years. Soon it turned out that the problems she had had disappeared and she was getting better. She put it herself in the words that “neither the stay in the hospital nor the visits to twelve doctors helped me, but Ania did”.

Maciejowice is a historic town, picturesquely situated by the Vistula River, near Kozienic, Dęblin and Garwolin. Maciejowice is famous for the fact that in its vicinity, on October 10, 1794, the last battle of Tadeusz Kościuszko during the Kosćiuszko Uprising took place. It was here, in front of the palace in Podzamcze, where his wounds were dressed. Interestingly, Kościuszko and the peasants set off for the regular army with scythes raised upright that to this day are a symbol of the village and appear here as a meaningful monument. It is worth seeing here: a rectangular market square, from which four corners run two streets, in accordance with the medieval urban layout, the classicist town hall, that housed the only Museum Tadeusza Kościuszko, the neo – Gothic Church of the Assumption of the Blessed Virgin Mary, a building from 1772 – 80 founded by Ignacy Potocki, with the Zamoyski tomb from 1908 at the back, a monument dedicated to Tadeusz Kościuszko in the park, the Kosynierzy monument.

Families with children should go to the nearby Illusion Farm in Trojanów, and literature lovers to the Sienkiewicz Museum in Wola Okrzejska, When crossing the province borders, you can visit the Air Force Museum in Dęblin, Puławy, Kazimierz Dolny, Janowiec and the Magic Gardens in Trzcianki. There are many interesting places within a short distance.

There are many different events in the area, especially during summer holidays:

The farm is located in Kawęczyn, 80 km from Warsaw, and is a typical agritourism farm, rarely seen today, because its main function is agricultural production. For several generations, the farm has specialized in breeding cows. There are also pigs, goats, rabbits, ponies, chickens, dogs and cats. The agritourism offer includes accommodation for 7-10 people. There is a lounge with a home library, TV and balcony, Wifi, souvenir room, kitchen. The farm has a garden with a pond, playground for children, a swimming pool, a gazebo, parking, bicycles, balls and a ping – pong table.

It is possible to order meals. The farm promotes natural and processed food as little as possible. Some of the products come from our own, large vegetable garden, that can also be used by guests.

At the “U Ani” farm you can take part in everyday rural life, learn how to make farm cheese from cow and goat milk, participate in making all kinds of preserves from available fruits, vegetables and herbs, and learn how to recognize them. You can take part in farm works such as: drying hay, hauling straw, feeding animals, you can try milking goats and cows, grazing cattle. During their stay, guests can enjoy various forms of active recreation: hiking, biking, carriage rides, and outdoor games.

The farm will satisfy anyone who loves a peaceful, quiet countryside, meeting nature and animals, as well as tasty home cooking. In the fall, it is an ideal place for mushroom pickers.

The location of the farm makes it a great base for visiting many attractive tourist places, and the hosts help in planning trips.

The agritourism  farm “U Ani” is a place friendly to people with disabilities and has the recommendation of the Polish Federation of Rural Tourism “Gospodarstwo Gościnne” – the category of the “one sun”.

Anna Goliszewska with her brother of two names Jan Józef and Krzyś (informal family member) has been running this typical family farm for many generations, and the agritourism farm for 12 years. She was born here and grew up here. She likes the countryside, that is why she graduated from the Warsaw University of Life Sciences.

On the farm, she creates a family-like atmosphere, guided by the principle “Guest at home, God at home”. This makes guests welcome to come back. She likes new people and cultivating traditions of the region. Her passion is fruit and vegetables processing, growing herbs and milk production, which is confirmed by numerous awards in culinary competitions, the award of the Minister of Agriculture and membership in the European Network of Culinary Heritage.

Deep down, Ania is a social activist, the president of the Masovian – Podlasie Agritourism Association, village administrator, and the president of the Rural Housewife’s Association. Her dream is to prepare an educational farm, the aim of that will be the opportunity to experience life in the countryside and everything related.