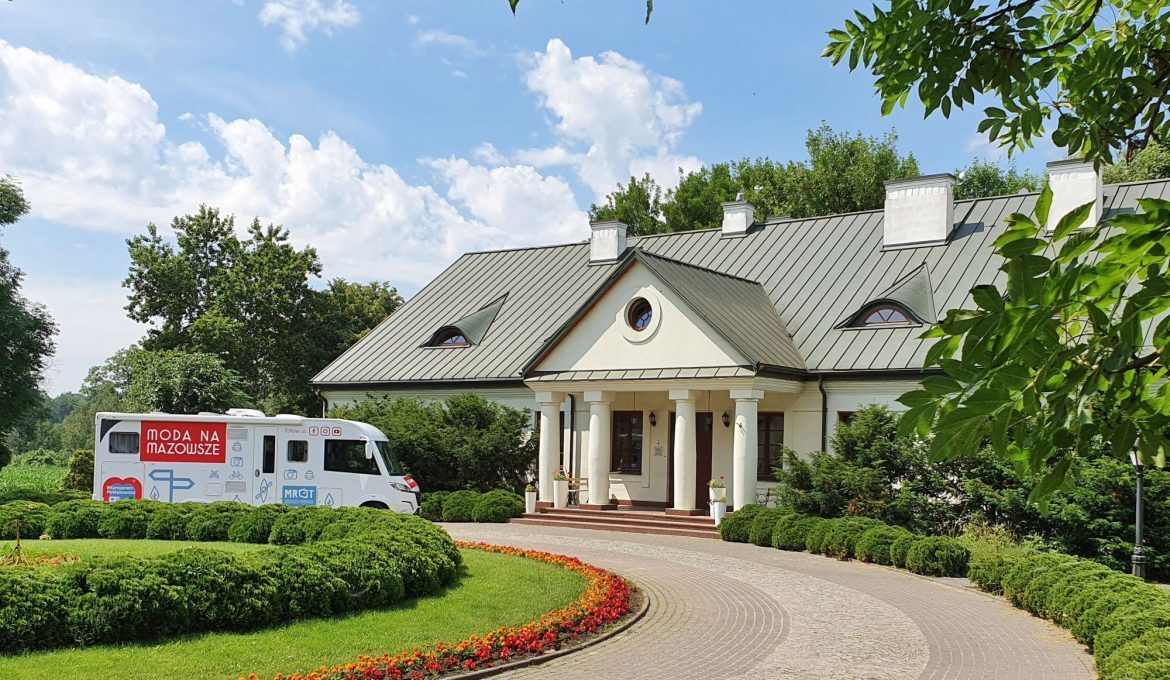 Małgorzata and Krzysztrof came from the Wiśniew commune, they grew up here and they lived here. For years, they had known the old property, or more like the Agricultural Production Cooperative and Ponds in Mościbrody. The Christmas carp at their home always comes from the ponds. In the mid 1990s, after the collapse of the cooperative, they purchased this land. The Mościbrody Meat Plant was established. In 2002, they purchased breeding ponds of the area of 100 ha, as well as historic farm building from the first half of the 19th century: a manor, an outhouse, a barn, a cowshed and a park with an area of 3 ha, requiring immediate renovation. Krzysztof is a famer who is passionate about and educated and willingly took up carp breeding. The manor house and the entire farm were to serve the society as they are closely related to the history of the region. The conservator of monuments helped to create the final concept of this place. Lots of conversations, many ideas and meetings, as a result of them the concept of the most faithful reconstruction of the 19th century landowners’ seat as a place for business and private meetings with guest rooms and a restaurant was created. The idea to use a wooden, historic barn and the entire “gum”, that is the farm buildings, was quickly born. A banquet yard has also been designed. With the support of SAPARD funds, the manor house was restored and on October 15, 2004, the first guests appeared at the Mościbrody Manor.

The first guests were teachers from the high school where Małgorzata and her children studied. It was a very touching and sentimental event. A year later, in 2005, the Dworska Restaurant was opened in the outbuilding. The ceremonial opening took place on Mikołajki Day. They were gifts and Christmas carols performed by Zbigniew Wodecki, the star of the Polish stage. The hosts remember it as a hugely moving event. A few years later, the manor was visited by an exceptional couple who now live with their family in Wrocław. It was like going back to the local court in 1941, during World War II. The spouses decided to go on a sentimental trip around Poland. The story is that the guest’s parents, who lived near Vilnius before the war, and the teachers, with their two young children, wandered west in search of a new home. The mother was pregnant again and she did not endure the hardship of the journey. The family stayed at Mościbrody during winter, taken in by strangers. Their next child was born here, and they lived here for 3 years, until the end of the war. Then they continued west.

Business meetings and entrepreneurs are very often held in the facility. A dozen or so years ago, a representative of a local company and a delegation from Hungary participated in such a meeting. As it turned out later, this meeting resulted not only in signing a commercial contract, but also in great affection and the founding of a new family. A Polish – Hungarian family lives permanently in Budapest, but when in Poland, they often visit the Mościbordy Manor, where their life together started.

Worth recommending are place, among others, on the Culinary Trail of the Masovian “Micha Szlachecka” (to which also the Mościbrody Manor belongs)

Cyprinus carpio is one of the oldest farmed fish. The carp were brought from the wars in the Danube basin by Roman legionaries. The fish quickly settled in Roma, where it was bred with great success. From there, the carp emigrated with the monks to Western Europe. He came to Poland with the Cistercians in the 13th century. Fish constituted an important part of their diet when the periods of compulsory fasting were up to 180 days a year. Carp was then most often baked or boiled in broth. In the 15 and 16th centuries, Polish magnates set up the largest carp ponds for races, and in magnate houses, Christmas Eve was a real feast, consisting of numerous fish dishes, including carp. At the beginning of the 20th century, carp became the festive fish of the poorest city dwellers. The Jews took him to the heights of culinary art. For many of them, carp has become synonymous with fish in general. The great career of carp at the festive table began in 1947. It was then that the slogan “Carp on every Christmas table” was coined and for years carp was the only fish available before Christmas and not available beyond that period. In this way, the carp’s position as a Polish fish for Christmas has strengthened.

At the Mościbrody Manor, every June, Kupala Night is organized with the release of wreaths on the water, a bonfire and the search for a fern flower – and events cultivating the traditional rituals related the eve of St. John, And on August 15, the Disco Mazovia Dance Music Festival takes place here – and event in the form of a festival with concerts and fun under the stars until dawn.

In the vicinity, it is worth visiting the May Stanisławowski Fair in Siedlce, the July Festival of Regional Cuisine “With cherry flavor” in Wiśniewo, the August Festival of Folk Bands in Wiśniewo, and throughout the tourist season, take advantage  of the Sunday guided walks in Siedlce entitled       “You praise others, you do not know yours” organized by PTTK, Podlasie Branch in Siedlce.

The Mościbrody Manor is a carefully restored and preserved in the style of a landowner from the first half of the 19th century with park and a comlex of breeding pods with an area of 100 ha. Guests have at their disposal historic manor and outbuilding buildings as well as farm buildings, where they are offered, among others:

accommodation in 28 double rooms and triple rooms, conference and training rooms, entertainment and wedding rooms in the manor house, rich menu at the Manor Restaurant in the outbuilding,

a convial courtyard with a historic wooden barn with the possibility of arranging atmospheric wedding and corporate events for 500 people.

The tasties side of the manor is the cousine. It serves traditional regional dishes as well as cold cuts and roast meats from the court cuisine. The meats are prepared in the manor house according to old recipes, smoked with a tree in our own smokehouse. The menu includes various dishes and carp grown in manor ponds, such as traditional bell – fried carp, smoked carp fillet, carp pate, carp sausage and dinner dishes – carp stew, carp baked with vegetables or mushrooms. However, probably the best known and appreciated “sweetness” here is the meringue cake with strawberry mousse, made here according to a special recipe, the fame of which goes back to Warsaw and even further.

The Mościbrody Manor is a member of the Masovian Culinary Heritage Network. The list of dishes of the network includes: carp from manor ponds, beef tartare, beef tripe and potato pancakes – it is worth tasting!

You can relax here both before and after the meal. Guests can use the manor park located in the Siedlecko – Węgrów Protected Landscape Park, relax in the bosom of nature in hammocks and on deckchairs, use kayaks, pedal boats or fishing. Groups can order culinary workshops entitled            “Disenchant a carp”, thematic workshops such as wool felting, decorating Christmas mazurkas or a walk around the ponds with a naturalist from the Ecological Group “Natural wealth of ponds in Mościbrody”.

Małgorzata and Krzysztof grew up in Wiśniewo, they both like the countryside. They had known the manor house since childhood, at that time as an unattractive, uninteresting place, decaying alone outside the village. When they became its owners, they started creating it anew. They really wanted the guests here to have a warm atmosphere of care, and at the same time to feel free and uninhibited. They have created a place they like the most – relaxation and rest, away from the “big, rushing world”.

They like to spend their free time here: sunsets admired from the pier or morning coffee by water on a deckchair or in a hammock. They both like to work in the garden.

Gosia loves flowers, she likes to plant and care for them. She especially likes perennial roses and hydrangeas – this is her passion. In addition, she loves photography, willingly taking photos of the surrounding nature, flowers and trees. She likes to capture interesting phenomena and the changing colors of the seasons. She likes to spend her Sunday afternoons cycling around the area.

Krzysztof spends his free time actively – he practices sports, runs regularly long distances. Moreover, he is eager to work on the farm, he likes feeding and supervising cattle the most.