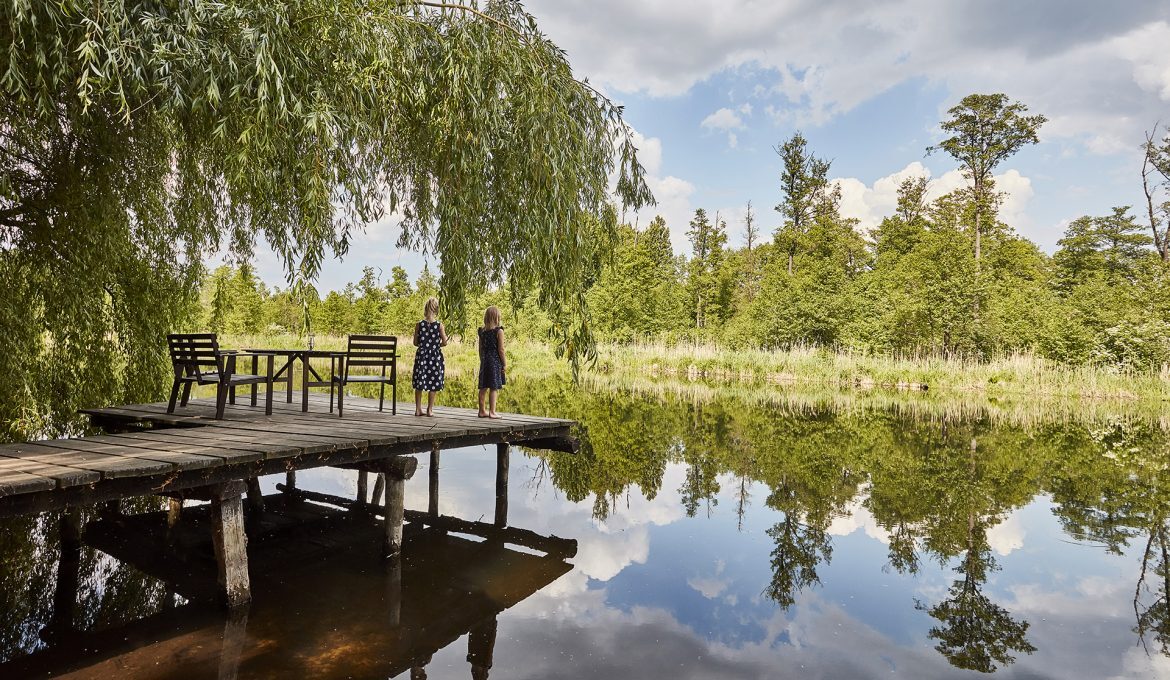 The manor house in Brudnice has always been open to visitors, even before it became an agritourism farm. The whole family and friends came here for holidays  and vacations, swimming competitions, parties, hunting and mushroom picking were organized, and in winter sleigh rides, themed games and New Year’s Eve on the frozen river. The tradition of the guest house has survived historical storms and became a natural start for agritourism activities started in 1995 by Teresa Budzich – Sumirska, the grandmother of the current owner, Zosia Leszczyńska. The grandmother successfully ran a family business for years, and then passed it on to young people ,believing that new times bring new challenges. During the first years, there were moments of doubt (related to the renovation of a hundred- year-old wooden house), but also of joy when the most important works, such as installing radiators, were finally completed, so that guests could be invited all year round. Currently, you can focus on developing the tourist offer and original attractions. The owners already have considerable achievements in the area: they belong to the Masovian Culinary Heritage Network and have won several awards in agritourism and culinary competitions.

The hundred-year-old manor house is full of stories told by household members and guests, some of them are written and published in the local press. For example, about the heir from the neighboring mansion who was a picturesque figure and a great original. He became famous among the local gentry with his annual trips abroad. After returning from the exhibitions, balls and afternoon tea were organized in his honor, during which he spread the charm of distant lands. Once, when the squire went abroad, a dishonest worker tried the gate with a sack of grain slung over his back. Suddenly, a window in the attic was opened, and the squire, wearing only his shirt, leaned out and shouted: “Just wait, Jasiek, when I come back from abroad, we will count!” It turned out that he had never traveled anywhere, but was sitting in the attic with books about a place he had “just visited”, and his food was delivered by a trusted servant!

The stories about mushrooms are a separate chapter about the manor. Zosia, the present owner, is a mushroom classifier and the author of the guide “ Hunting mushrooms”. So often “mushrooms – mushrooms come here”, even those who eat…. toadstools for breakfast while the owner serves them in the evening. Guests sometimes stare in horror at the contents of the baskets she brings from the forest, but when they wake up the next day without harm to their health, they are eager to fill their baskets with brand new species.

The must see list in the area includes the Small Town Museum in Bieżuń (12 km) and the open – air museum in Sierpc (29km). In the neighborhood there is also the Zamojski Palace, where the first verses of the Constitution of May 3 were written. Nearby in the Górznieńsko – Lidzbarski Landscape Park, that stretches for kilometers, passing through three voivodeships: Mazowieckie, Kujawsko – Pomorskie and Warmińsko – Mazurskie. The Wkra Valley creates the Natura 2000 area associated with wild bird habitats. There you can watch white and gray herons, meadow harriers, kingfishers and many others. In this area, the river is unregulated, and in Brudnice itself it picturesquely overflows in front of the water threshold, creating a labyrinth among alders, with beaver feeding and warm springs. On the other side of the bridge there is a large communal beach.

The manor house in Brudnice is built on the foundation of an even older house belonging to the family. It is architecturally interesting because of the intact historic substance  it is the same as it was built in 1914, and the interior functions have not been changed either. All the works carried out in it were done with respect for the building and its history. Guests can visit the manor house full of family souvenirs, listen to stories about the history of this place and the people who created it: about the great-great-grandfather of the January Uprising insurgent, grandfather, social activist and and excellent bridge player, who built a school in the nearby Lubowidz, and in Brudnice – a cooperative dairy, organizing a cooperative dairy for the products of Mysłowice, market as far as London. If not for the war and the People’s Republic of Poland, butter from Brudnice could be known all over the world!

There is also a family story about a robbery in which great – grandmother fired a Colt. And also about how my grandmother, called by her father, quit her job in Warsaw overnight, packed her bags and returned to the countryside with her two children. Then she became the first female milking master in Poland and ran the family wooden water mill for the next 40 years. The mill, which was a magical, strange place, unfortunately burned down in 1994, which resulted in the opening of the agritourism farm by Zosia’s grandmother.

Many regular events take place at the Museum of the Masovian Countryside in Sierpc. They are closely related to long weekends, spring welcoming, haymaking, harvesting or autumn digging.

Most of the events at the manor house are related to the original ideas of the hosts. Cyclical events are organized, such as the Mafia Weekend, during which guests “play the mafia”- the Italian cuisine reigns supreme, and all dress up to the Corleone family. Two or three times a year, together with the Nudoodporne group, weekends are organized for mothers and children (Children’s Day, end of holidays) with fun for the little ones dominating, and mothers finally have time for themselves. There are also “Strachy na Lachy”, St. Andrew Day and welcoming spring, and there are mushroom weekends in autumn.

The offer includes 5 rooms in the pavilion added to the manor house in the 1970s and renovated a few years ago. They will have a separate entrance and a view of the river and part of the garden. Each of them is arranged differently – antiques and original paintings with landscapes prevail. The family of the hosts is on the second floor of the manor, and downstairs there is a dining room and a lounge. Guided tours are organized in these rooms and meals are shared when it is cold outside. In season, meals are served in the garden, on the terrace covered with a huge tent. There is a manor park and a young forest on a five – hectare plot on the banks of Wkra. You can find many attractions here, such as: a playground for children, a trampoline, a sandy descent into the water, a shelter with a fireplace, a sauna, bicycles with children’s trailers, kayaks with a middle seat for a child, various board games and a whole wardrobe of board games. Dogs and cats live here, of the livestock there are chickens and ducks. There are also two vegetable gardens on the site, the organic crops of which are used in the kitchen.

The offer includes kayaking trips. The hosts take the guests up the river to the chosen route, which they finish by reaching the manor’s pier. The river also makes it possible to use the sauna effectively, especially in winter. The wooden  barrel is located right on the banks of the Wkra river. Guests have the opportunity to observe nature through a semicircular window, and during breaks they jump straight into the river.

It is also a paradise for anglers. There is a large pier on the plit, there are also two boats that are used for fishing. The river is a real pike refuge. Particular effects can be achieved at the beginning and end of the fishing season due to the low amount of seaweed. In hot weather, however, the river allows for pleasant swimming, especially around the pier and in the mainstream, where the underwater vegetation is not so lush. You can also go to the local beach, on the other side of the bridge, where the button is sandy and rocky and water is quite shallow.

In the tourist season, the hosts offer accommodation with full board, in the off- season everything is agreed individually. Tourists have access to a coffee machine, and in the evening it is possible to taste homemade liqueurs. The hostess specializes in regional cuisine and seasonal dishes,  for example preparing spring nettle soup. Venison is also prepared according to old family recipes. The most famous are: award – winning mushroom with cabbage kvass, the old Polish roast duck and mushroom dishes. Great vegetarian dishes are also available. Guests also appreciate fruit and vegetables preserves, cakes always served after dinner and homemade sourdough bread with grains. Fluffy omelettes served with whipped cream and blueberries in syrup are a real sensation. For some time, the sale of its own fruit and vegetables preserves, mainly soups, made traditionally, without the use of artificial additives and flavor enhancers. The jars are pasteurized so they can be stored for a long time. Once a week, shipments are organized throughout the country, and the new project was called: “Dokręcane in Dworek nad Wkrą”. Everyone laughs that Karol – the owner tightens the jars so much that it is difficult to open them without help, so he should be added to each package.

The farm is distinguished by its multi-generation agritourism tradition, the unique magic of the place and the atmosphere”like at grandma’s”, with everyone feeling at home. Dworek nad Wkrą evokes nostalgic memories of bygone times, but also a desire to support it on its way to the future.

Zosia Leszczyńska and Karol Niziołek are a married couple of archaeologists with three children, all girls. Zosia’s mother also helps with the farmyard. Zosia has been associated with Brudnice since childhood. She always dreamed of living here and running the farm like her grandmother, Karol was not connected with North Mazovia, but he got used to it perfectly. Both associate the future with agritourism. They also want to further revitalize the mansion and the park, having a million ideas. In addition, Karol is a computer graphic designer and runs a graphic studio, and Zosia, as a mushroom classifier, takes people to mushroom picking and gives advice. She also starts processing activities on a small scale, making home – made soups and preserves.