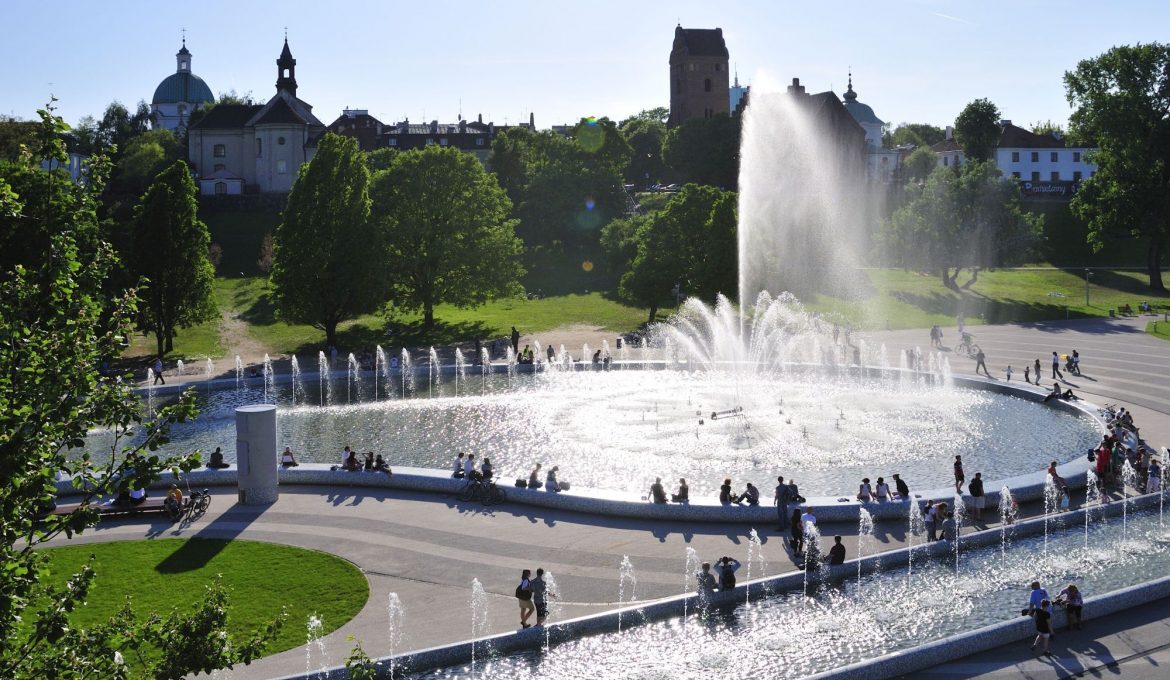 The multimedia Fountain Park is a place of relaxation, a huge summer community center, the largest Warsaw cinema and a concert stage all in one. The park, located right on the bank of the Vistula River, in the area known as Podzamcze, has been an artistic, cultural and entertainment showcase of Warsaw since 2011. It is most popular on summer weekend evenings, when light performances, traditionally referring to Warsaw legends and watched by thousands of viewers, are displayed on the water curtains. In the summer, the fountain park provides refreshment from the heat, and in the evenings it undergoes a complete transformation, becoming the scenery of performances combining water ,lasers and sound. The presented shows have a multimedia character thanks to LED floodlights, lasers and a projector installed in the fountains. They make a show referring to the history and tradition of the capital city play out on a water screen made of for. Until now, the performances were reminiscent of the legends of Wars and Sawa, The Prince Bear o the Basilisk. Each show attracts thousands of viewers to the park.

The youngest one will enjoy the water playground located near the fountains, where on hot summer days you can splash in the water gushing from the ground.

The park is also worth visiting in winter – on weekends, the main fountain becomes a multicolored animated sculpture, and the shows are accompanied by festive music. In the vicinity of the park, it is worth paying attention to the bench of Wiliam Lindley, the designer of the sewage system in Warsaw, opened in 1886. It was on the occasion of the 125th anniversary of the city’s water works that the fountain park was created.

The traditional program in the Multimedia Fountain Park was changed in 2020 by the pandemic. The full program for 2021 has not yet been announced. It is only known that from May 15 to June 6, an action under the slogan of the Poet District is planned.

Admission to the park and participation in performances is free. Current information on the functioning of the park can be found on the website www.park-fontann,pl

Two information boards in Braille with spatial graphics were installed in Fountain Park. These boards are located at the entrances from Boleść Street and from the side of Wisłostrada, at the entrance from the bus stop located at Sanguszki Street.

How to get to Fountain Park?

You can reach the park by public transport: by lines 118 and 185 (from Wybrzeże Gdańskie) or by trams stopping at the stops” Most Gdański or the Old Town (you need to walk from both of them approx. 800 m). You can go down the escarpment from Nowe Miasto on Wójtowska Street or by stairs at Kościelna Street.

There is no parking near the Park, just paid parking lots at Bugaj and Boleść Streets.