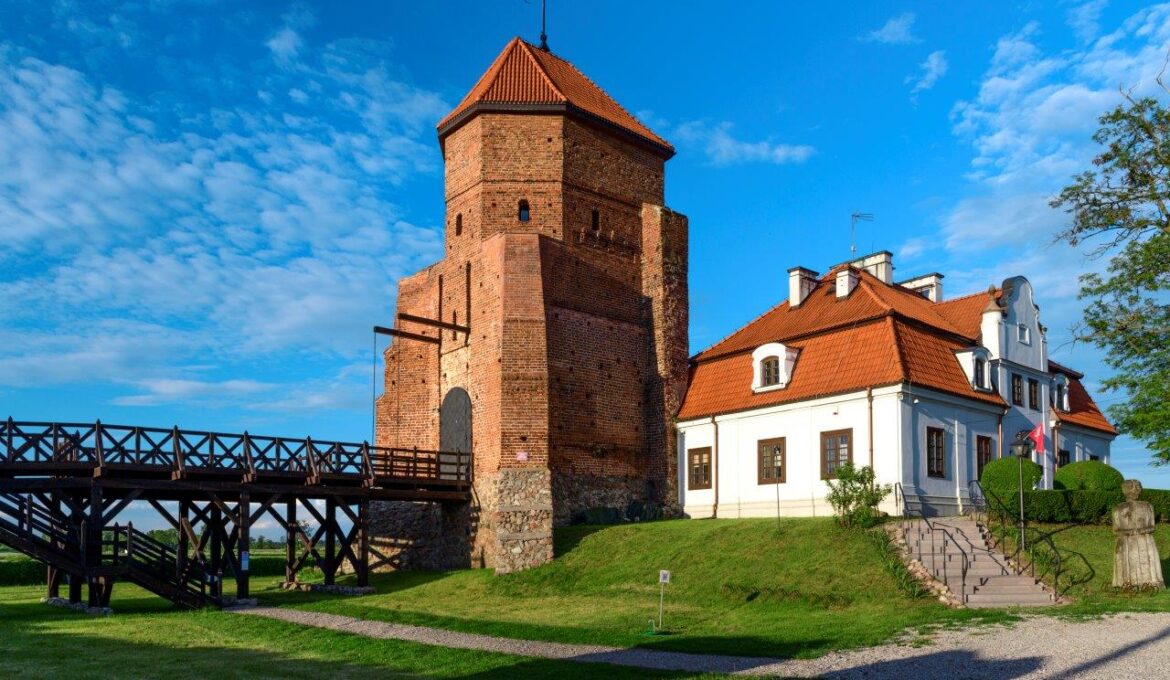 A Gothic castle built in marshes, a bastion of the last ruler of independent Mazovia is today inhabited by the famous Yellow Lady. Liw is the seat of the Armory Museum, the venue of annual knightly tournaments and an international culinary event. And it was so close that even a brick would not remain in this place to this day!

From the border stronghold to the ducal fortress

At the beginning, it was just a small stronghold built on the border of Mazovia and Lithuania – a wooden stronghold, which protected the subjects of the Duchy of Mazovia from the invasions of Lithuanians, Yotvingians, and later also Tatars. It is not known when it was built, but the the first records documenting the existence of the stronghold come from the beginning of the 14th century. Today, they are still areas of the border, this time of Mazovia and Podlasie. The Liwiec Valley, once a border river, attracts lovers of canoeing, cycling and hiking trips, beautiful landscapes, good traditional cuisine and historical reconstructions, and above all people looking for peace and quiet and a pace different from a big city race. There used to be swamps in the place where the castle was built. A hill reinforced with piles was built on them, and first a stronghold was erected on it, and then castle, built at the beginning of the 15th century at the behest of Prince Janus the Old. However, one of the most outstanding rulers of Mazovia did not live to see the end of construction. The work was completed by his grandson Bolesław IV. It was not really even the halfway to complete the stronghold. Because the defensive walls of the castle in Liw enlarged their height exactly twice when its hostess was Princess Anna Mazowiecka, the last ruler of the independent Mazovia.

A strong female hand. Or even four hands!

In the time of Duchess Anna, the defensive walls „grew” from 6 to 12 meters, from the side of the courtyard there was a gate tower closed with and iron gate and a drawbridge, and the last representative of the Masovian Piast dynasty was not afraid here even of King Sigismund the Old, with whom she entered into a dispute. After the incorporation of the Masovian Duchy, she retained Garwolin, a manor house in Warsaw and just Liw. And although the year of 1526 is considered the end of independent Mazovia, the principality continued to exist in Liw and other of Anna Mazowiecka for 11 years.

Anna was not only the good hostess of this place. Another reconstruction of the stronghold was initiated by Queen Bona Sforza, whose castle owes the transformation of the gate into a multi – story tower. Apparently, the Italian woman liked Liw exceptionally, and after the death of her husband, Zygmunt the Old, she spent 8 years in Mazovia. In 1556, she returned to Italy, to her native Bari, forced to surrender all goods in Poland. One of the castle’s legends is connected with her departure.

Apparently, all of Bona’s movable property could hardly fit on 12 carts. But only 11 of them arrived in sunny Italy…. The contents of the lost wagon are said to have ended up in the dungeons under the castle in Liw. The locals say that these treasures are guarded by the devil. Other laugh that there is no question of deep dungeons in such a wet area, after all, the castle was built in a swamp! However, it has beautiful Gothic cellars, which can be seen by visitors from 2019, when the underground was opened after revitalization. They have been inaccessible to ordinary mortals for 40 years.

Bad times for the castle and miraculous rescue

In the 17th and 18th century, the castle was not very lucky, just like many such buildings in Mazovia. It was burned down and destroyed first during the Swedish Deluge and later during the Northern War. At the beginning of the 20th century, there was practically a pile of rubble there. Who knows if anything would have survived to this day, if not for the Polish archaeologist Otto Warpechowski, who used a trick to save the priceless monument. During World War II, the Germans intended to dismantle the ruins and use the bricks to build a camp in nearby Treblinka. Warpechowski managed to convince the occupiers that the castle was a remnant of the Teutonic castle and that the Nazis did not decide to liquidate such a heritage.

Today, the castle is not only a Gothic testimony to the past of the Duchy of Mazovia, but also a culture – forming place and tourists base. The gate tower has been preserved from the Gothic castle, which houses the Museum Armory with a rich collection of weapons, as well as a fragment of the walls and the mayor’s manor. In the spring of 2019, works related to the revitalization of the castle and the construction of a cultural and historical park were completed. Finally, you can enter the Gothic part of the castle: not only to the gate tower, but also for the first time in 40 years to the renovated Gothic basement, which was adopted to conduct museum lessons and organize exhibitions.

There is an impressive 100 meter long pier, referring to the historic structure known as the bailey, that led to the outer bailey through the meadow. Four centuries ago, there were a dozen or so structures built on stilts, and over time it may be possible to recreate them all. So far, a prominent place has been gained, extremely attractive during such outdoor events as the Tournament of Tastes or knight tournaments and other historical reconstructions. In addition to the pier, there is also a terrace above the Gothic basement, where you can organize outdoor performances after unfolding the portable stage.

Between cultural events, the park next to the castle is, above all, a convenient base for tourists: lovers of the stories of the amazing Yellow Lady, who as a director of the Museum of the Armory Roman Postek assures, did not scare or discourage the visitation of the castle; for hikers traveling around Mazovia and Podlasie with tents, as well as fans of canoeing trips, A floating pier was built especially for them, the marina on Liwiec, as well as shelters to protect canoeists from rain.

And who was the Yellow Lady during her lifetime? You can check on the spot or listen to Roman Postek’s stories.

The castle is, especially after the expansion of the cultural and historical park, an ideal place to organize interesting events referring to the history  of this place and the culture of the region. The most important of them are the annual tournaments – knights and culinary specialties. A knight’s tournament is an amazing journey in time, a colorful, multi-part spectacle: shows of foot and horse fights, including sword and ax fights, a costume competition, a medieval fair and historical craft workshops. The culminating event is the evening battle for the castle.

The International Tournament of Taste at the Great Lithuanian Gościniec is a full – day festival with a fair of regional food and handcrafts, tastings, culinary competitions, performances and other attractions. It has been held since 2014 every summer at the caste of Liw, with the exception of the 2018 edition, when it was temporarily moved to Węgrów, when the castle was being renovated. The tournament was awarded with the „Best Tourist Product of the Masovian Voivodeship 2016” certificate.

The event’s aim is to present and cultivate the rich culinary tradition of the regions along the Great Lithuanian Gościniec Trail leading from Mazovia and Podlasie to the Grodno region and Vilnius region. There are many competitions for the tastiest dish during the event also the ones to reach „Gościniec from a journey” culinary title gift from the trail.

Once visiting Liw, you can also visit the nearby Owl Mountain. It is a vantage point located south of the castle on the meandering Liwiec, a few minutes away from Jarnice. Not only tourists love this place, but also filmmakers organized a film set in this area three times. Among the filmmakers was also Jan Jakub Kolski who made the outdoor cinematography for the „Pornografia” by Witold Gombrowicz as well as Filip Bajon shot scenes of Aleksander Fredro’s „Śluby panieńskie”. Also some Japanese producers were working here on the movie „Persona non grata”.