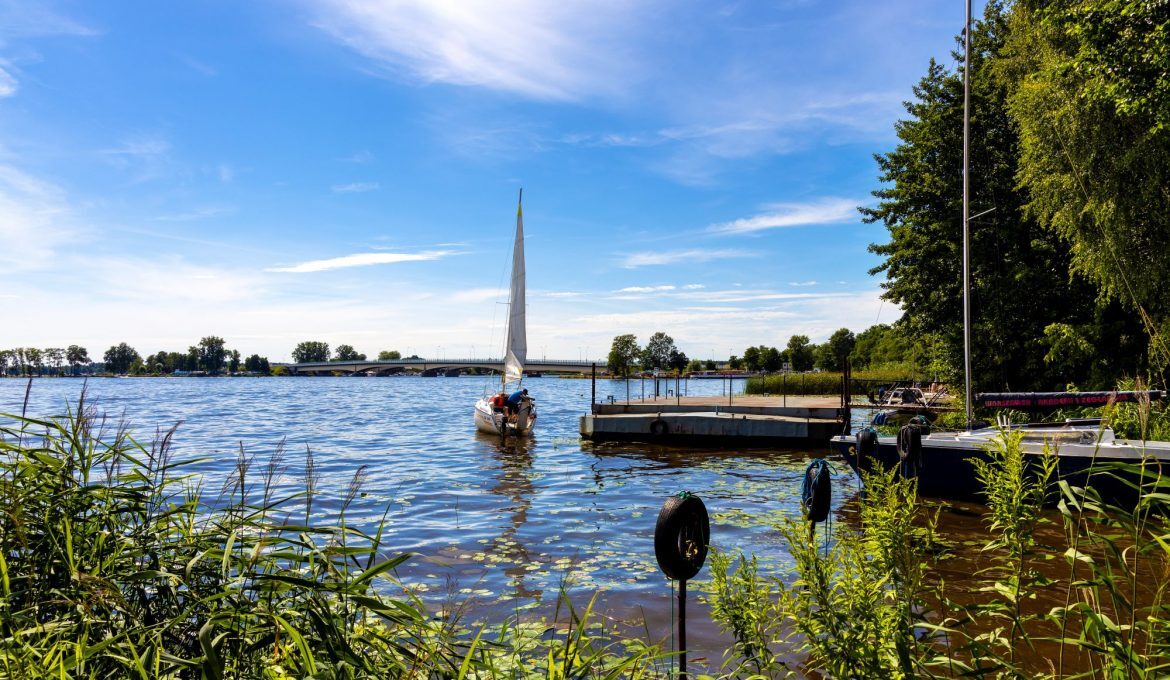 Have you heard that the former Duchy of Mazovia even has its own sea? Of course, the principalities are proportionately large and created a few centuries after the incorporation of Mazovia by the Crown, but Zalew Zegrzyński,recently most often called the Lake, is large enough to go crazy on sailboats or motorboats, and around it – on bicycles. Marinas, harbors, boat rentals of all kinds have been operating since spring, and most of them are ready for a picnic even in pandemic times. Spending a warm weekend on the water is a great idea and we have already written about this form of relaxation.

A story has already been written about the history of Zegrze Lake, its name and the monster that allegedly rummages in it:

It is time for a bike trip around Zegrze,because that is what this reserve is also called. The entire area is crisscrossed by bicycle routes, which can be found on interactive maps and in the convenient POWIAT LEGIONOWSKI application,that also includes tourist attractions, monument, historical information and catering and accommodation facilities (including guesthouses and agritourism farms). The application is also useful for sailors who will find a map with information about underwater obstacles and the depth of the water at specific points.

Another facilitation in planning the trip and during the trip can be a brand new map of the Bicycle loop around the Zegrze Lake, which can be downloaded. The map is supplemented with a description of the reservoir and information on three developed bicycle routes:  Serock, Wieliszew and Radzymin.

The waters of the Narew, Bug and Żerań Canal divide the area around the Zegrze Lake into four parts, each having a slightly different character and its own assets.

The largest part, the northern one, lying in the Narew bend, has three strong dominants – the city of Serock with a medieval fortified settlement, a beautiful beach and a white fleet, as well as Zegrze and Dębe forts. There are also very interesting natural and historical attractions – nature reserves, Wąwóz Szaniawskiego, two park and palace complexes – Zegrze and Jadwisin, and the ruins of the house of the author of “Dwa teatry”. Boating clubs are located along the shoreline.

You can get to know the area better thanks to several bicycle routes:

the biggest attractions – the nature reserve “Zegrze ”. the palace and park complexes Jadwisin and the Zegrze palace, the Wąwóz Szaniawskiego and the Jadwisin reserve, monuments of Serock – the Barbarka stronghold, remains of the fortress and embankments, the Jewish cemetery, nature monuments.

In the south. Wieliszew with fantastic bicycle routes through the wilderness and the famous Wieliszew Crossing, and the most famous beach on the Zegrze Lake – Nieporęt. There are additional challenges here – the cross -country and Nordic walking routes leading through”

The eastern shore of the Zegrze Lake from the Canal to the mouth of the Bug is a range of marinas, ports, guest houses and beaches – simply a great holiday complex, with plenty of restaurants, cafes and pastry shops. But a bit further from the shore you can find beautiful forest areas with lakes – the old river beds of the Bug and sandy paths. If you prefer asphalt routes – you can take the road from Białobrzegi to Fort Beniaminów. Andon the Bug itself, over the loop of the mainstream and oxbow lakes, you will discover one of the most magical places in Mazovia: a private open-air museum in Kuligów.

On the other side of the river, at the confluence of the Narew and Bug rivers, there are Cuperl and other holiday places.

And after resting – another challenge – a trip along the Narew River from Serock to Nowy Dwór Mazowiecki alongside paths, also forest and field paths, up to the Modlin fortress.

Current news from Zegrze Lake and detailed information about it and the surrounding infrastructure can be found on the website jeziorozegrzynskie.info.