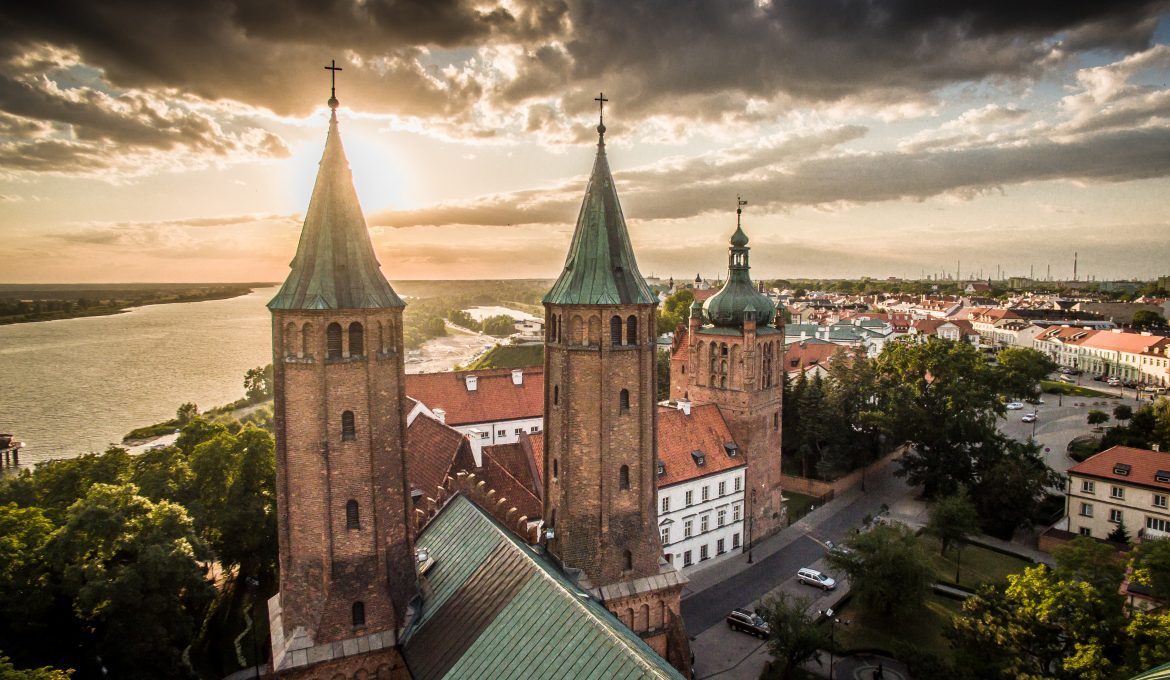 Monument to the Victorious Defenders of Płock, photo from the archives of the Płock City

The historic center of Płock is the Tumskie Hill. This is the place where the history of the town started in the 10th century, when Mieszko I built a fortified town on a high hill above the Vistula river. It is believed that the self-proclaimed ruler of Mazovia, Miecław tried to create a state independent of Poland and based on pagan faith, probably ruled the Tumskie Hill for a short time. Bolesław the Bold founded the first cathedral for the bishopric established in his time, hence the ruling of the whole Poland Prince Władysław Herman and his sons – Zbigniew and Bolesław the Wrymouth. From the times of Konrad Mazowiecki the dukes of Mazovia ruled Płock.

As a benefit of the seat of rulers, there are symbols of medieval rule on the Tumskie Hill as well as the prince’s castle and the bishop’s cathedral. Around them there are many buildings and places worth visiting during a visit to Płock. The city was awarded 2 titles: The Ducal Capital City of Płock coming from the preamble of the city statute, and the title of the Hero City that was given to Płock by the Marshal Józef Piłsudski for the heroine of defense against the Bolsheviks in 1920.

The Cathedral Basilica of the Assumption of the Blessed Virgin Mary in Płock is one of five oldest Polish cathedrals. The Romanesque temple was built on the Tumskie Hill in the place of a wooden church, in which as Gall Anonim claims, prince Bolesław the Wrymouth was knighted. The cathedral was consecrated in 1144 and destroyed many times by the invaders. It was renovated, rebuilt and extended by two Gothic west towers and to this day is one of the most valuable architectural monuments and witnesses to the history of Mazovia and Poland.

Ashes of  the Polish rulers are buried here: Władysław Herman and Bolesław the Wrymouth. Their eternal rest found here also: Konrad Mazowiecki, his grandson Bolesław II and great grandson Wacław Płocki, his son Bolesław III, and another great-grandson of Konrad Mazowiecki, Siemowit III, his brother Kazimierz and sons Siemowit IV and Henryk, who was the bishop of Płock. The last prince of Płock land before its incorporation into the Crown, Janusz II is also buried here.

Where to find their graves?

In the 19th century researchers entered the basement of the Płock cathedral, looking for the remains of Bolesław the Wrymouth and his father, Władysław Herman. Apparently they recognized Bolesław by his deformed nose. The remains of the rulers, who ruled all of Poland from Płock, were transferred to a special sarcophagus, which can be seen today in the Royal Chapel. At that time, the bones of Masovian dukes were also discovered. However, a special sarcophagus was not built for them, but placed under the floor at the feet of the Polish rulers. They are also there to this day. Huge double – leaf doors covered with bronze plates with reliefs were ordered from the Magdeburg bell foundry especially of the basilica. The priceless monument was transported under mysterious circumstances in the 13th or 14th century to Nowogród Wielki, where it can be admired to this day at the Sofia Cathedral. A replica of the Płock Doors was made in 1981 and can be seen in the basilica.

More secret stories of the Tumskie Hill can be told by Iwona Krajewska and Michał Stańczak from the Płock Local Tourism Organization.

One of the oldest Polish schools

„Our school, now known as Małachowianka, was founded in 1180, it is the oldest school in Poland that continues in the same place and is also one of the oldest in Europe” – reads on the main page of the Secondary School Stanisława Małachowskiego in Płock. The school consists of three buildings: the former collegiate church of St. Michael the Archangel for the first half of the 13th century, a magnificent Jesuit building erected in the years 1675-1685 and modern building from 1962 – 1964. The oldest monuments on the school grounds were discovered only a few years ago. During the renovation (from 2012 to 2014) the foundations and two entrances to the Romanesque church of St. Michael the Archangel from the 12th century. Thanks to the discovery, today you can admire the relics of the Romanesque portal and the relief of a stone lion adorning it at the door of the church, parts of the ground floor walls from the Romanesque period and the Gothic sacristy. The illuminated monuments of the Romanesque, Gothic, Baroque and later periods have been displayed in the basement of the collegiate church. These are not all the discoveries made during the recent renovation. In the school chapel (now the auditorium), it was possible to unveil and save a beautiful polychrome by prof. Władysław Drapiewski – one of the greatest creators of sacred paintings in Poland.

If someone cannot visit the Małachowianka in real life, it is possible to go to one of the oldest educational institutions in Poland for a virtual trip. The school site offers a lot of possibilities: you can see the buildings  from the outside from the street level and from a bird’s eye view, you can go inside to admire the famous paintings in the high school hall, view the display cases and visit the school museum, as well as climb the tower and enjoy the panorama of Płock!

Płock is one of the two cities awarded after the end of the Polish – Bolshevik war. The second is Lviv, honored with the Virtuti Militari Cross. Płock, decorated with the Cross of Valor, is also one of the two cities awarded by Marshal Piłsudski with the title „City of Hero”. A monument commemorating two events that gave rise to the award of this title, dedicated to the inhabitants of Płock bravely defending the city, was erected on the Narutowicza Square. It is the second oldest square in Płock, after the Old Market Square. Its history dates back to the 13th century. The main entrance to the castle was located here, as well as a commercial square, formerly known as the Canonical Market. Today’s the Narutowicza Square is surrounded on three sides by beautiful historic tenement houses from the first half of the 19th century which house such important institutions for the city as the Płock Scientific Society, district and district courts, and the Zieliński Library. The oldest pharmacy in Płock is also located here. And in the center of the square you can see the Monument to the Defenders of Płock 1920 erected in 2018 just before the celebration of the 100th anniversary of Poland regaining independence.

The column crowned with the eagle was designed by the well-known sculptor Gustaw Zemła, the author of among others, Władysław Broniewski’s monument. The monument was made by the studio of the sculptor Paweł Pietrusiński, a student of professor Zemła and, like his master and a lecturer at the Warsaw Academy of Fine Arts.

At the end, a few stories not fully tested, and maybe even made up from beginning to end….