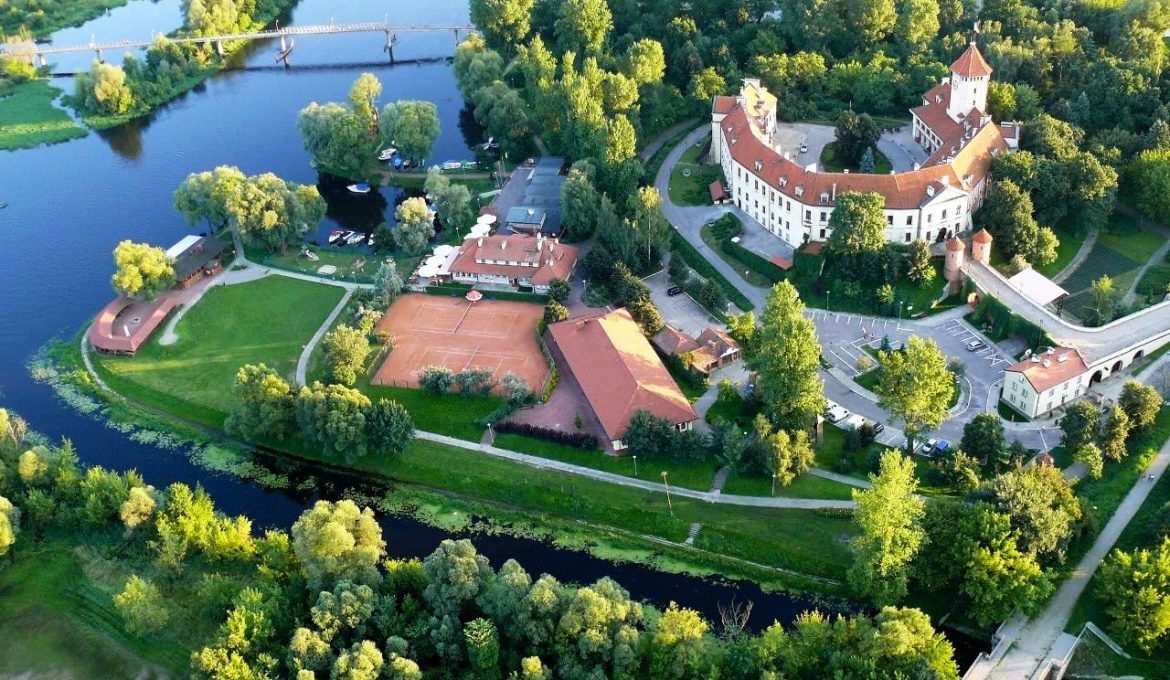 Castle in Pułtusk, photo. Archives of the House of Polonia in Pułtusk

The filmmakers love the city. The picturesque market square, the longest in Europe, is created for dramatic chasing, and the former castle in Płock bishops is the perfect place for historical reenactments of a spectacular terrorist attack. You can experience film adventures in Pułtusk in several ways: follow the trail of the plein – airs in this city or come to party that makes you feel like you are on the set of a costume super production or ….an Italian film. The city torn by canals is called the „Venice of Mazovia” for a reason: you can book a gondola ride here, even in the version with a romantic dinner on the boat!

The Old Town Square in Pułtusk is an exceptionally attractive place for filmmakers. It is enough to climb the seventh floor of the former town hall tower, where there is a vantage point, to catch their delight: from above, you can fully admire the beauty of the longest paved market square in Europe. It was on these cobblestones that the escape scene with the priceless grandfather’s trunk was shot in the movie „Klub Włóczykijów” based on the novel by Edmund Niziurski with the same title. Wojciech Mecwaldowski and Tomasz Karolak played the roles of dangerous criminals: Wieńczysław Niedzielny and Dr. Bogumił Kadrylla. This is not the only adventurous film plot related to Pułtusk old town. In the 870 episode of the series „M jak Miłość”, one of the heroes had a car stolen near the market square, and Jan Nowicki and Cezary Pazura, who played the main roles in Olaf Lubaszenko’s „Sztos”, escaped through the streets of the Old Town from a German tourist, who had been deceived a moment earlier –  played by Leon Niemczyk.

On the market square in Pułtusk, scenes from the first episode of the cult series by Stanisław Bareja „Alternatywy 4” were also shot. It was here that the wife of the most famous comedic janitor and the resident of Pułtusk Stanisław Anioł (the brilliant role of Roman Wilhelmi), Miecia Aniołowa (Bożena Dykiel), spent a long time queuing to the grocery store, and one summer day waiting for the delivery of bread, bought a fur and a hat from a suspicious trader. Not only the film Angels came from Pułtusk. It was also Majka, the beloved of Kajetan Talar, who was the main character of the series „Dom” came from. And also Elżbieta, the main character of the film adaptation of Kornel Filipowicz’s story „Romans Prowincjonalny” came from Pułtusk.

CASTLE OF BISHOPS, HUSSARS AND TERRORISTS

The carefully restored former castle of Płock bishops functions today as a three- star Hotel Castle Pułtusk Dom Polonii (Polonia House) and offers 56 rooms (103 beds). If you add the Hotel 25 beds in 16 rooms at the Podzamcze – Stanica and tourist standard rooms in Podzamcze (130 beds), you can get a big accommodation base, willingly used for the organization of weddings and other family celebrations, large occasional parties and symposium, because the castle offers 6 conference rooms.

The beautiful building also attracts the attention of filmmakers. You can see it, among others in the series „M jak Miłość”, but probably the most stuck in the memory of those TV viewers who watched „Ekipa” – a political fiction series by Agnieszka Holland and Kasia Adamik. In their plot, the castle was attacked by terrorists from the neo – fascist organization, and the whole country watched with bated breath whether it was possible to save the hostages held in the castle.

For several years, the castle grounds have been a place of interesting historical events with reconstructions and cavalry. Every autumn, there is a hussar picnic with the tournament „ For the Ring of the Lion of Lechistan – King Jan III” and a reconstruction referring to the Relief of Vienna.

In the castle interiors you can celebrate St. Andrew’s and New Year’s Eve, and even Christmas and Easter. It is favored not only by the beautiful architecture, and nature, but also by the exquisite castle cuisine, famous for its traditional noble, hunting and gentry cuisine.