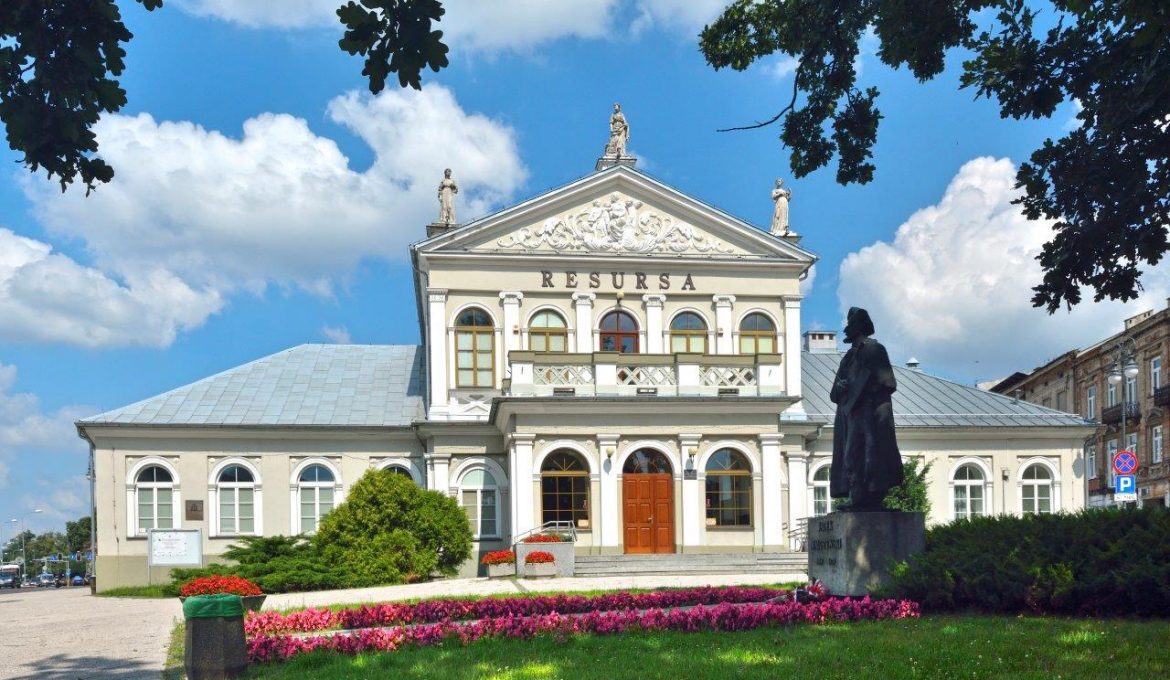 Radom is the largest urban center in Masovian Voivodeship apart from Warsaw. But it is not the only  reason why it is worth coming here. An interesting history with strong freedom threads, fascinating monuments, an unusual post – industrial environment with a hint of multiculturalism are the first reasons. The next reasons are connections with Malczewski, Gombrowicz and Wajda. There is also the most “cultural” power plant in Poland here.

Visitors to Radom are also encouraged by cyclical events, including the largest in Poland and in this part of Europe, International Air Show, International Gombrowicz Festival, International Festival of Street Artists and Precision, Radom Fashion Show, and celebrations of the anniversary of the Radom Protest, already included in the calender of municipal events Workers’ Party June ’76. The events from over 40 years ago are today part of the identity of Radom citizens and a reason to be proud that the Polish and European road to freedom began in Radom.

Moreover, it is easy to get here – Radom is located at the intersection of several important communication routes that also attracts many entrepreneurs. The designed hiking and biking trails will help you get to know the tourist attractions of the city and the surrounding area. From 2017, 27 stations of Radom City Bike allow the rental of 270 bicycles.

The historic origins of Radom are hidden in the central part of the city, a several – meter – long grass covered hill in the valley of Mleczna River, known as Piotrówka. It is a remnant of a defensive hill fort surrounded by a moat and a ring of wooden and earth ramparts, built in the 10th century on an artificial hill. The stronghold was the seat of the castellany. The name “Piotrówka” comes from the wooden church of St. Peter that survived until the beginning of the 19th century. The significance of this place, considered the cradle of Radom, is remembered  by a monument – an erratic boulder with the image of Mieszko I and the first coat of arms of the Polish state. The area of Piotrówka is considered by archaeologists to be extremely valuable and even unique in the country.

In the area of Nowy Radom, established in the 14th century, now known as the Kazimierzowskie Town, the streets layout and the former market square have been preserved. The surviving fragments of the defensive walls surrounding the medieval town are best visible at Wałowa street, on the southern wall of the former Pijar College. Right next to it, in the area of the present parsonage of the parish church, the remains of the former starosts castle, also known as the royal castle, once included in the city’s defense system, have survived. The castle, erected in the Kazimierz times, was renovated and extended several times. It was the seat of the traveling royal court and the starost of Radom. King and princes from the Jagiellonian dynasty, traveling between Cracow and Vilnius, visited here most often. In the mid 17th and early 18th centuries, the city was destroyed by the invasion of the Swedish army. The royal castle in Radom has burned down. It never regained its former glory. It appears only from descriptions. The mock -up of the castle, that is its hypothetical representation, is presented in a recently renovated tenement house located at Grodzka Street. At the level of the basement and the ground floor, an exhibition showing archaeological excavations, the history of the building and the castle in Radom has been prepared. From Mała Street, relics of the defensive walls from the 14th century are preserved.

The city is full of valuable monuments of sacred and secular architecture, representing various styles, eras and art trends. Noteworthy are, among others, town hall, Esterka House, Gąski House, Pijar College, historic burgher houses and the building of the Civic Resursa.

Churches make up the city’s unique heritage. The parish church St. John the Baptist was erected in the years 1360 –  1370 from the foundation of King Kazimierz the Great. There were many distinguished guests here, mainly from the Jagiellonan dynasty, including: Władysław Jagiełło, Kazimierz Jagiellończyk, Zygmunt the Old and Zygmunt August, St. Jadwiga, St. Kazimierz Jagiellończyk – the patron of Radom, Fryderyk Jagiellończyk, who accepted the cardinal’s insignia here. The most valuable monument in Radom is the church and monastery of Bernardines, invited to Radom in 1468 by King Kazimierz Jagiellończyk. The late Gothic complex of buildings was built in the second half of the 15th century oven with a pyramidal chimney. In Europe, just a few buildings of this type have survived, and in Poland it is probably unique. Since 1992, the cathedral in Radom has been the church of Care of the Blessed Virgin Mary, built in the years 1896-1911 according to the design of Józef Pius Dziekoński. The architecture refers to the French Gothic. The towers resemble the taller tower of  St. Mary’s Church in Kraków.

The rich calendar of cultural events in Radom includes regional, national and international events. Radom is proud of one of the best collections of contemporary art in Poland and one of the largest national collections of Jacek Malczewski works as the great painter came from Radom. The Mazovia Center of Contemporary Art “Elektrownia” in Radom, because of the organization of national and European events, quickly gained fame as one of the most interesting centers of contemporary art in Poland. There is a Fine Arts Group in Radom, and municipal and private galleries, such as Łaźnia Gallery and Galeria 58 inviting artists from all over Poland to exhibitions.

In Radom, there is an extremely charming and widely equipped open – air museum – the Museum of Radom Countryside. Outdoor events related to the culture and tradition of  the region, such as the Bread Festival, as well as historical shows take place here. For example, every year on August 15, you  can admire reconstructions of battles of World War I of the  Polish – Soviet war.

It is worth starting your visit to Radom by visiting the tourist information center, the addresses are provided below:

MUSEUM FACILITIES IN RADOM AND AROUND THE CITY

Museum of the Radom Countryside