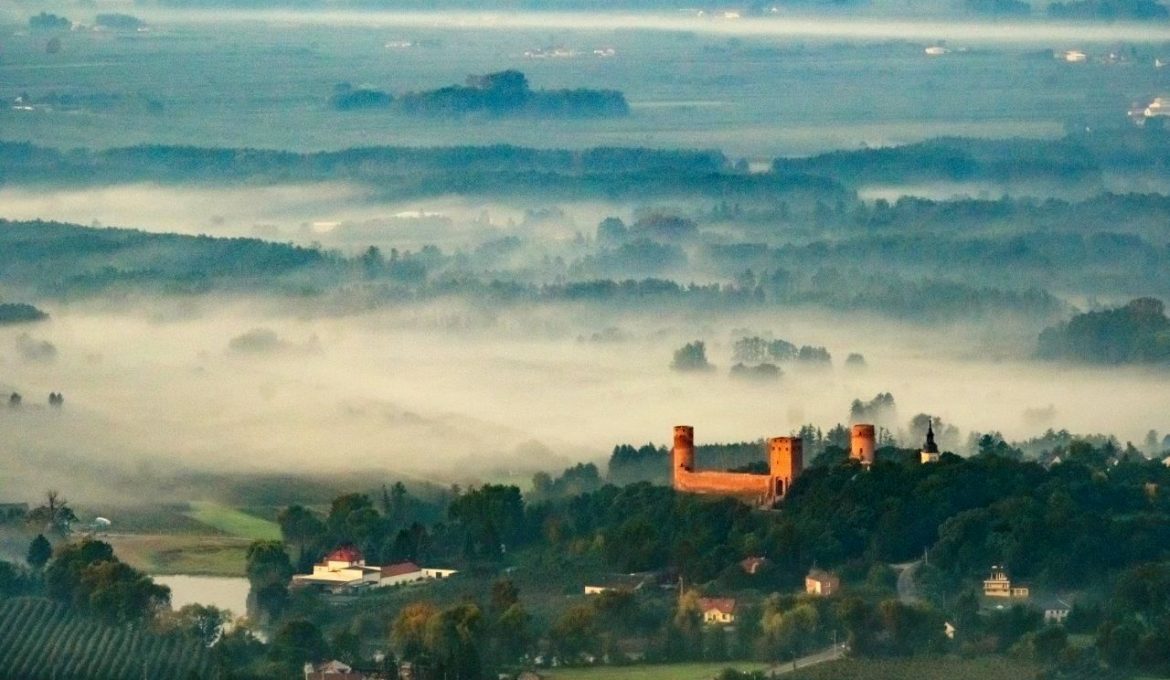 Forests, lagoons and river backwaters as well as dune hills arranged in a ring between Piaseczno and Konstancin – Jeziorna and Góra Kalwaria – this is the Chojnów Landscape Park. It is cut into three parts by the valleys of the Jeziorka and Zielona rivers, shredded with canals and mini canals, with ranges of meadows, pastures and groves, where rare species of animals, plants and fungi live and grow. On the outskirts of the park, historic manors and villages as well as war cemeteries have been preserved, which can be reached using one of the tourist routes.

How to visit the park – hiking and biking trails

Konstancin – Jeziorna and Zalesie Górne are the most important points where you can start walking, The paths that start there cross the park’s reserves and forests. They can be used to reach the most interesting place of historical and cultural importance. For cyclists, routes starting in Las Kabacki or Powsin will be more attractive and are ideal for a day trip. The 20 km long Chojnów Nature Reserve Trail starts in Konstancin-Jeziorna, crosses several Chojnów reserves and reaches Zimne Doły and Zalesie Górne. The trail is suitable mainly for hiking, andin winter – also for cross – country skiers.

The Chojnów Trail of Nature Monuments leads from Zalesie Górne to the Chojnów reserve. On a nearly 10 – kilometer route, you pass a natural monument – Stephan’s Oak and the valley of the Zielona River.

Another trail, called Nadwiślański, leads from Konstancin – Jeziorna to Góra Kalwaria. It is attractive due to its climatic views of the Vistula old riverbed, Masovian orchards and historical architecture.

The 16-kilometer Main Trail of Chojnów Forests runs from Ustanówek to Konstancin – Jeziorna and is intended mainly for hiking. The Architectural Monuments Trail around Konstancin – Jeziorna is a loop that starts in the city center and leads through Skolimów, Rzeczka Mała and the outskirts of Słomczyńskie Forests. The total distance is 9 km. There are also interesting routes for cyclists.

Another popular bicycle route is the 33-kilometer Vistula Bicycle Trail that begins in Powsin. It is especially recommended for people interested in monuments and architecture. It leads  through Konstancin – Jeziorna, Obory and Góra Kalwaria, and ends at the ruins of the castle in Czersk.

The most popular is the 16 km long bicycle path along the Jeziorka valley. The loop starts in Prażmów, crosses the Skarpa Jeziorki reserve, and forms there, passing Aleksandrów and Zawodne. It goes back to the starting point.

An interesting alternative is a walk in the park in the form of a quest “Skarby Zimnych Dołów” that starts at the Zimne Doły recreational meadow, by the ponds in Żabieniec, by the Warecki Route. At the end of the trail, there is a treasure in the form of a box with a stamp, the reflection of which confirms that you have completed the entire route. The PDF file with instructions explaining the rule of the guest is available for download here www.

In the vicinity of the park there is Konstancin – Jeziorna – the only health resort inthe Masovian Voivodeship. In the city Spa Park you can find walking paths and piers, a playground, a volleyball court and a graduation tower, and in the Hugonówkaculture center – see a multimedia exhibition, souvenirs, photos and othe archives related to the history of the region. The town’s showcase are houses from the beginning of the 20th century, designed by leading Polish architects, in particular the villa Jutrzenka and the villa Ustronie.

In nearby Obory, it is worth seeing the Baroque Potulicki manor house surrounded by a park, and in the village of Zawodne – historic buildings with a mill.

One of the attractions in the vicinity of Zalesie is the green amusement park Planeta Zalesie, where the youngest can travel by mini – train. For all water sports enthusiasts there is a wakeboard lift, pedal boats, floating cars and “stand up paddle”. An additional asset of Zalesie is a playground for children, a shooting range, a volleyball court and the Małpi Gaj rope park.

In the vicinity of Górki Szymona, located on the bank of the Jeziorka river, there is a beach surrounded by greenery, with a strip of sand dunes.

An interesting idea for spending free time, especially in the case of families with children, is a visit to the educational clearing at the headquarters of the State Forest of the Chojnów Forest District at Klonowa Street in Pilawa. The tables there describe the organization of the work of bees in the hive and the process of honey production.

On the other hand, a visit to the Zwierzynieceducational farm at the ecological farm in Nowy Prażmów, is a chance to see the breeding of cattle, sheep, the Hungarian Mokasz donkey and mangalica pigs.

The area of the Chojnów Landscape Park is 6.7 thousand, and its buffer zones – 4.7 thousands hectares. It is located in the territory of five communes: Piaseczno, Góra Kalwaria, Konstancin – Jeziorna, Tarczyn and Prażmów. Most of the park area is covered by pine forests.

On the rivers Jeziorka and Zielona you can see otters and kingfishers hunting, and on their shores there are about 100 species of birds. Particularly noteworthy is the pond complex in Żabieniec, where you can see, among others, mergansers, grebes and red – necked grebes, teal and black storks. The forests are home to roe deer, elk and badgers, which are the symbols of the park.

In cooperation with the Kurpie Tourist Organization and the Association for Promotion and Development of Zegrze Reservoir.