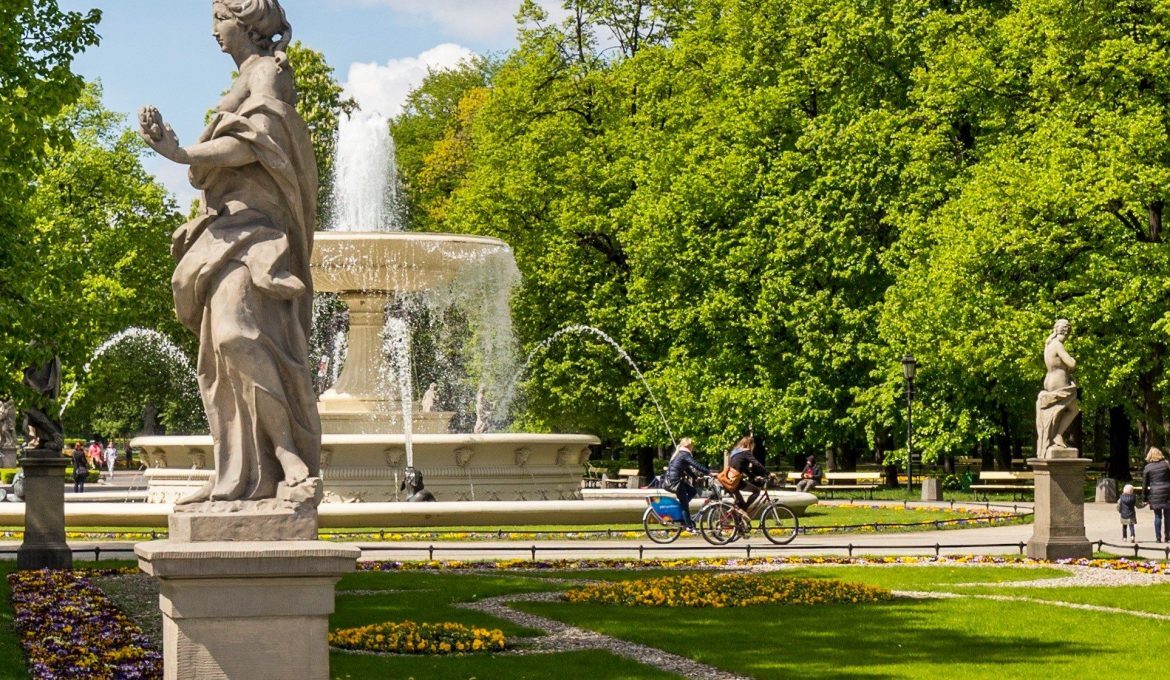 At the beginning there was a manor house, then a magnate palace, and when the property was bought by King August II the Strong  – the Royal Palace with a garden worthy of a ruler. It went down in the Polish history as the first public park in the country and as the place where the first freestanding theater building was erected especially for the stage. The first Polish films premiered here as well.

To this day, only fragment of the colonnade with the Tomb of the Unknown Soldier remains from the Saski Palace, after the theater, or actually two theater buildings, there is not even a trace, but the Saxon Garden is still doing well and is one of the most important green points of the capital city center, eagerly visited by Warsaw residents and tourists.

Right outside the city walls

Even at the beginning of the 17th century, the area of today’s Saski Garden was located…. outside the city, and more precisely – behind the Sigismund Embankment, built by Sigismund III Vasa after the Battle of Cecora. And it was the there, just outside the city, that the burgrave Tomasz Morszytn had a manor house built, that after his brother’s death was inherited by Jan Andrzej Morsztyn, former royal secretary, grand treasurer of the Crown and one of the most outstanding Polish baroque poets. One hundred years later, his great – grandson will sit on the throne as the last Polish ruler.

But let’s not anticipate the accidents.

Ambitious, in love with beautiful objects and works of art, the aristocrat rebuilt the manor near Warsaw into a two-story Baroque palace with four towers. August II the Strong bought it from the heirs of Morsztyn in 1713,  four years after his election to the king of Poland, and ordered its expansion, commissioning the work to outstanding masters from Dresden. He also ordered to buy all plots of the west of the palace, demolish the building there, including the consent and hospital of the BONIFRTBrothers, and arrange a French – style garden in the area thus created.

Royal architects made the palace the key point of the so-called Oś Saska – an urban layout leading from Krakowskie Przedmieście to the square then called Wielopole, and later Plac Żelaznej Bramy. It was through it that one entered the garden from the west, that King August II made available to the public in 1727, made it the firs Polish public park.

Only for properly dressed

A kind of admission ticket to the Saski Garden was… decent clothes. No wonder, practically from the beginning of existence, the Saxon Garden was an elegant place for relaxation, entertainment and art. The Janissary orchestra operating at the court of Augustus II regularly performed in the park with promenade concerts. August III the Saxon founded the Opernhaus Park – the first freestanding theater building in Poland intended for performances, where first Italian opera, later also French vaudeville and comedies were presented.

It was here, on November19, 1765, that the Polish National Theater, established by King Stanisław August Poniatowski (great – grandson of the mentioned Jan Andrzej Morszyn), opened with the premiere of Józef Bielawski’s comedy “Natręci”. Shortly thereafter, the National Theater had a new building, and the Opernhaus was demolished due to poor technical condition. In the place where it once stood, at the corner of Marszałkowska and Królewska streets, there is a stone with a commemorative inscription and an installation designed by Czesław Bielecki with information about the current repertoire of the National Theater.

In the first decade of the 19th century, the Saxon Palace became the property of the government of the Kingdom of Poland, and in 1810, in the part of the building belonging to the Warsaw Lyceum there were located school teachers, including Mikołaj Chopin and his family. Undoubtedly, the wife of Mikołaj. Justyna, went for walks to the Saski Garden with her children, Ludwika and Fryderyk. It looked completely different then that it does today. It was definitely very run down. Destroyed during the Kościuszko Uprising, robbed of sculptures, deprived of the gardener’s hand…

Only after 1816 did the restoration works begin. Therefore, it is possible that the young Fryderyk had the opportunity to observe how the neglected French garden turned into an English – style park. A pond, an openwork fence instead of a wall, new plantings. But the real revolution took place after the death of Chopin, in the 1850s, when Henryk Marconi designed the first modern water supply system for Warsaw. On the artificially built hill in the Saxon Garden, a water tower was built – a water reservoir designed on the model of the temple of the Roman goddess Vesta of Tivoli in Italy. The park fountain is also the work of master Marconi.

The Saxon Garden was revived again.Varsovians and visitors returned there. A policeman at each gate made sure that carelessly dressed people and children without parents did not enter the park. And a visit to the Saski Garden was a real adventure for young Varsovians –  one of the first playgrounds for children was created there!

Earlier, the park was enriched with a new theater building – a wooden Summer Theater built in 1870, with 950 seats. It was supposed to be only a seasonal facility, but the excellent acoustics and performances of such stars as Helena Modrzejewska were strong arguments for leaving the building for longer. Besides, it served not only the theater: in 1902, the first screening of Polish films took place there.

The wooden building of the Summer Theater burned down in September 1939. The Saski Garden was closed to the Polish population in May 1942, and the Saski Palace was completely destroyed by the German occupiers after the Warsaw Uprising. The building, where since 1918 housed the General Staff of the Polish Army, and during World War II the seat of the Wehrmacht, was blown up by German soldiers at the end of December 1944. Several attempts to rebuild the key elements of the Oś Saska have so far failed.

Garden of nature, history and art

The Saski Garden is today a wonderful oasis of greenery in the very heart of Warsaw. The area has changed somewhat. Originally designed on a plan resembling a kite, with a longer axis being part of the Saski Axis, today it is slightly shortened on the west side, where its borders is Marszłkowska Street, but has expanded to the sides, absorbing the gardens of the Zamoyski family and the Ministry of Foreign Affairs.

A visit to the Saski Garden, and sometimes a quick walk through the area, is an opportunity to see nature, history and art. There are six trees – nature monuments in the park: a huge poplar on the side of Marszałkowska Street, a white horse chestnut next to the playground and four ginkgo trees growing in the vicinity of the water reservoir.

The eastern border of the park is the only preserved fragment of the Saski Palace – the colonnade with the Tomb of the Unknown Soldier. A guard of honor is kept at the Tomb 24 hours a day. The ceremonial change of the guard performed by soldiers of the Polish Army Representative Battalion every Sunday at noon attracts lots of viewers.

Near the colonnade, also on Oś Saska, there is a fountain designed by Marconi, and next to it – a sundial. Further, walking along the main alley towards Marszałkowska, you will see 21 sculptures – post war reconstructions of Baroque statues depicting, among other, seasons and virtues.

On the right side there is a pond with a fountain depicting a boy with a swan (the youngest will rather like the lively ducks swimming in the pod, and sometimes crawling in duck walk on park lawns), and behind it a water collection, another work by Marconi. Behind the water collection, there is a sculpture most often visited by very young guests, who sometimes leave flowers there. This is a monument to Maria Konopnicka that was created thanks to the contributions of children from all over Poland. You are already on the edge of the park, closer to Marszałkowska and Senatorska Streets. If you were looking for a playground for children, you need to take a walk along the alleys to the exact opposite end of the Saski Garden – closer to Królewska Street, more or less at the height of the fountain.