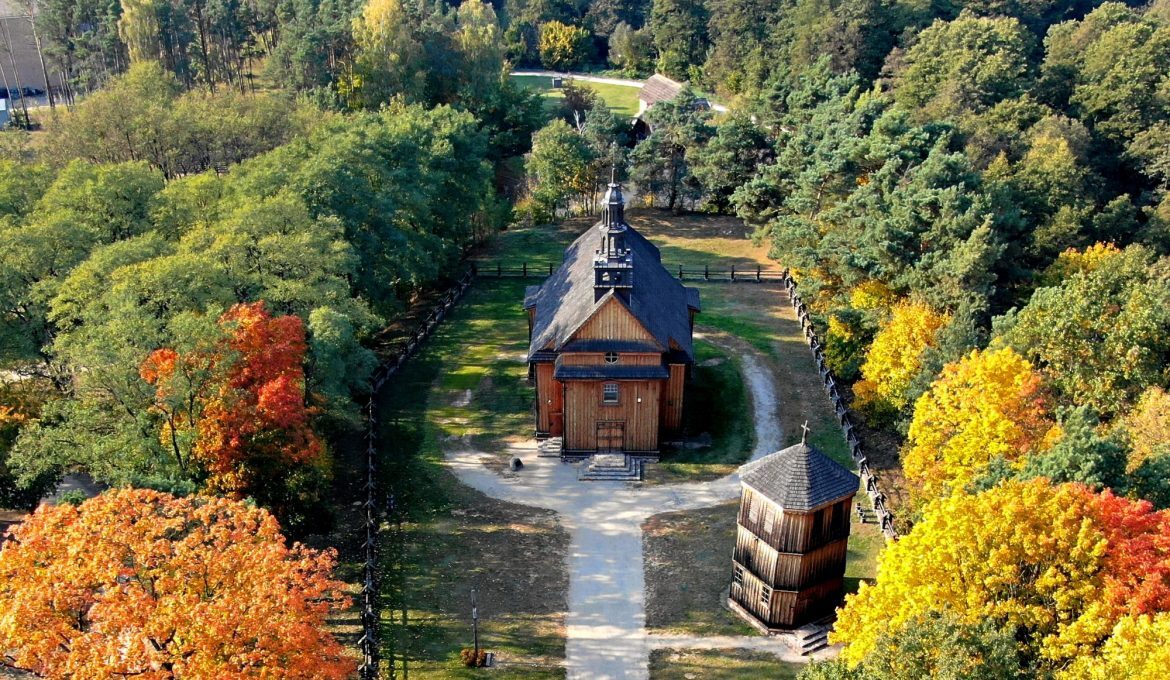 The church in the Museum of the Masovian Countryside in Sierpc, photo by B. Przybyłowski

Thinking of the name „Sierpc” brings the Museum of the Masovian Countryside to mind first. And rightly so, this is a big village, located in north – west Mazovia, that has been the greatest tourist attraction for at least 50 years. There is also a famous Marian sanctuary and a historic town hall in a beautiful, peaceful neighborhood. Sierpc is also a place of the three – day Castellan Festival of Tastes.

For dancing and for the rosary

The natural surroundings of the town of Sierpc, inhabited by 18 000 people, are forests, two lakes and the meandering river Sierpienica.

The first settlers appeared in this place already 400 years BC! During archaeological excavations, there were coins discovered in Sierpc dated from the times of the Roman Empire. It may mean that the amber route ran here.

The first parish church is said to have been built here in 1003 or in the latest the 12th century. The patrons of the temple are Saint Wit, Modest and Krescencja, and it was in the 12th century that the cult of Saint Vitus began to disappear in Poland. However, it is not to the oldest church in Sierpc that regular pilgrimages come, but to the Sanctuary of Our Lady of Sierpc on Loret Hill, which was established in the place of the apparition of Our Lady during the plague in 1483. At that time Sierpc was already a town for over a century and a half (it was granted municipal rights in 1322).

In 2020 as in 1483, the city gave up boisterous games, feasts and public events held in the city every year. The largest of them is  the three – day Castle Festival of Tastes with presentation of regional flavors including Sierpc producers. It is a great celebration of local and regional products and shows that the title „Town with Taste” suits Sierpc perfectly.

The Museum of the Masovian Countryside in Sierpc

The biggest tourist attraction in Sierpc is the Museum of the Masovian Countryside that attracts app. 100 000 people each year. It is an unusual place, beautifully situated outside the town on the Sierpienica River, operating in the same rhythm as the Masovian countryside lived many years ago. There are arable fields, gardens, apiaries, livestock and domestic animals. During regular events the huts are populated and you can watch and even try squeezing linseed oil, making butter, embroidering, making flowers from tissue paper or other farm work.

There is a real village, typical of the post – exploration village of Mazovia recreated here and consisting of 11 peasant homesteads from the north – west Mazovia region. A farm in Rębów with a windmill was also reconstructed. There are also several independent architectural complexes in the open – air museum including a tavern complex with an inn from Sochocin, a blacksmith’s forge and a blacksmith’s cottage, a manor complex with a landscape park, a manor from Uniszek Zawadzki with landscape park and the 18th century church with a bell tower.

The building of the town hall, located in the center of Sierpc, belongs to the Museum of Masovian Countryside. It hosts temporary exhibitions promoting local culture and the culture of other nations, as well as meetings for children and school children related to Christmas of folk rituals.