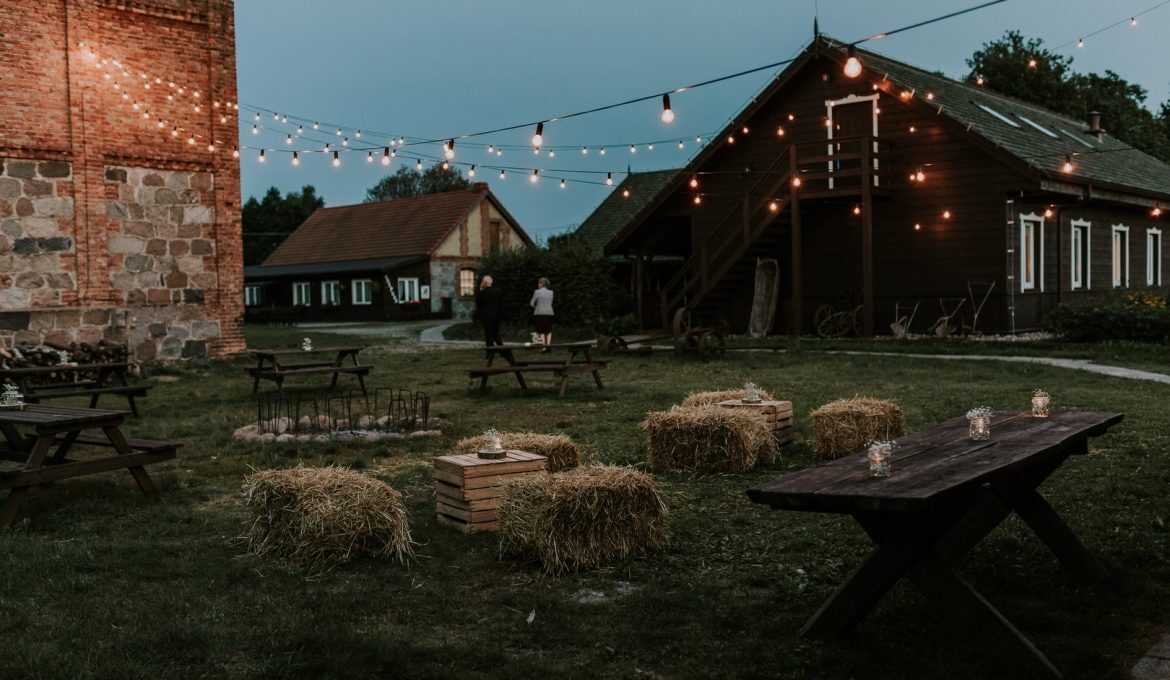 The Gąsiorowo Mill is a place that was supposed to be primarily a home for a pair of aviation enthusiasts – Adrianna and Jacek. Initially, the heart of this place was the meadow behind the ruins of the mill, from where hot – air balloons were regularly launched for flight. However, with time the hosts decided that Gąsiorowo was an ideal place to live and moved here permanently. Successively, the habitat was expanded and adapted to the needs of guests who visited the place in large numbers.

In 2008, a company called: “Gąsiorowo Młyn” was officially established  and it continues to function dynamically. The facility consists of  three original buildings – all from the beginning of the 20th century: a wooden house made of pine logs, a coach house made of fieldstone and brick, and a remarkably atmospheric red brick mill building. During functioning, the coach house was converted into an inn, a guest house with accommodation, two banquet rooms, a large playground, an educational path and a farm with animals were added.

The passion for local traditions, for products of local origin and everything related  to the cultural heritage of this part of Mazovia, causes many exceptional situations in Gąsiorowo.

Some time ago, Gąsiorowo was visited by a group of primary school children and the main theme of their stay was the educational program “From grain to loaf”. Sourdough bread baking workshop and using the traditional wood – fire oven made the children wish to repeat this experience. So they made it as a tradition to their class – the monthly feast of bread. The children learned how to make sourdough and how to prepare bread in Gąsiorowo. They have also made their parents organize together at home – baked bread class tasting once a month.

The other story is about a family traveling to relatives living on the border of Mazovia and Podlasie. They stopped over in Gąsiorowo for lunch and were willing to go on a further journey soon. One they got their meal, they were speechless. So far, they did not know such a taste of pork chop with cubes fried in real lard. They did not know the puree fried “gold” and the Gąsiorowo pickles. When the hosts explained where the meat comes from, how everything is prepared and told them about the philosophy of Gąsiorowo cuisine, everything became clear – local products, local recipes and traditional cooking make a seemingly simple food unique. Ultimately, the family gave up on rushing to relatives and stayed in Gąsiorowo for 2 days, trying local delicacies.

The Gąsiorowo Mill is a place willingly visited also by foreign tourists. How much joy and great fun it was when a group of Chinese came to the mill for a few day long stay. The possibility of picking tomatoes straight from the bush, picking eggs yourself from the hen house, having raspberries after picking them yourself – they were the activities that the guest never had before. During a walk through meadows children picked flowers and herbs and created idyllic bouquets themselves. An absolute highlight of the visit was the traditional cabbage pickling in a wooden barrel with participants stepping into the barrel with cabbage and trampling it with their bare feet. Tourists from China were amazed at the variety of flavors of Polish pickles that they like very much. When they tasted real, countryside sourdough bread, they almost unanimously stated that it was the best thing they had eaten in Poland and the taste of this bread would remind them of the Masovian village.

In Gąsiorowo, near the mill there is a neo-Baroque wooden church from the second half of the 18th century. The history of the church dates back to 1394, when the bishop of Płock, Ścibor, established the local parish. The first mention of the parish priest Świętosław comes from 1394. He tried to get indulgences for the new church of Blessed Virgin Mary, John the Baptist and Eleven Thousand Martyrs.

Only a quarter of an hour’s drive from Gąsiorowo is Pułtusk – a city with an exceptionally rich history. You can see the castle there, which used to be the seat of Płock bishops, and today it is a hotel and restaurant. The old town is situated on an island, that is why Pułtusk is often called “Venice of Mazovia”. You can go on a unique gondola cruise in the Narew River and the Pułtusk canals surrounding the old town. In the regional museum, you can see the famous Pułtusk meteorite, and on the longest paved market square in Europe, a tenement house where Napoleon Bonaparte stayed for a few days in the 19th century.

YOU DID NOT KNOW THAT

Visitors to Gąsiorowo Mill often ask what the mill was powered by. After all, there is no rushing river next to it, and there is no windmill in sight. The truth is that the mill here was powered by a steam engine. Over the years, as technology advances, the steam engine has been replaced by a diesel engine. This was how the mill operated until the 1970s. Today it has slightly changed its function, and is very popular among young couples for open – airs weddings.

In 2013, the Association for Promoting Rural Culture “Gąsiorówka” was established in Gąsiorowo as a result of the hostess’s love for Masovian folklore, especially that from the vicinity of Pułtusk. The association gathers local enthusiasts of tradition, regional cuisine and representatives of dying professions. Among members of the associations there are several local artists who deal with tissue paper and Masovian paper – cutting. The association actively obtains recipes for local delicacies from local housewives, that are later presented at the harvest festivals and other events.

Craft workshops in Serock “ To Barbarki robota” is an event in July, for adults and teenagers who can take part in various workshops and shows. Although the craftsmen are modern, the event is organized in a medieval atmosphere. In the specially prepared camp, you can see the everyday life of the former inhabitants, try Polish dishes and watch knights fight.

The Wianki in Serock is a colorful ritual show organized on the banks of the Narew. Fun full of singing and dancing, surrounded by burning torches, introduces you to old customs and traditions. The climax of the event is the release of the wreaths on the water.

“The music fountains of Serock” are also small concerts taking place in Serock during summer holidays. They are jazz, classical, folk and ethnic music events, often performed by amateurs gathering around the fountain. They are organized for those who wish to spend a pleasant Sunday there.

The Gąsiorowo Mill is an authentic milling farm with over 100 years of history, successively expanded and adapted to the needs of modern tourism – for individual guests and groups.

The Guest House offers 48 beds in double and triple rooms, and in an apartment for 6-8 people and in multi – bed rooms.

Near the Guest House there is a large cottage for organizing events, conferences or workshops; a special bread baking oven in the cottage and real sourdough bread is baked during the workshops. The cottage is also adapted to organizing conferences and you can also find the required equipment there.

Next to it, there is a wedding hall in a modern building, with atmosphere and décor reminiscent of the original building of the habitat.

The heart of the center is the inn “Gąsiorówka”, as cuisine is an undoubted advantage of the farm. The Gąsiorowo Mill won the awards of “Perła 2012” and “Perła 2014”for the best Polish traditional and regional dish. The chef, Jacek Machnacz, who has been collecting old recipes from the inhabitants of the village for many years, keeps inviting the locals until they accept the taste of dishes, as they are made to their family recipes. The taste of the local cuisine is so special that the arrival of individual guests for weekend family dinners has become a tradition.

The Gąsiorowo Mill is a perfect place to organize events – it can accommodate up to 1000 guests at a time, and the events can be personalized to the client’s needs.

An important element of the center’s activity is school tourism. Since 2012 Gąsiorowo Mill has accepted groups of children and youths on one – day and multi – day school trips. The original workshop and integration programs refer to the program of schools and kindergartens, and in the course of great fun, children learn and also get familiar with the Masovian traditions. For groups, there is a huge playground “Gąsiorkowo” and an educational path.

Adriana is a fan of aviation, diving and many other activities. She has her own vision of the development of the Gąsiorowo Mill that she keeps implementing. She also loves social activities and is interested in folk culture and art. She is also a multi – instrumentalist and folk singer who has been studying the folklore of Kurpie Białe for many years. She conducts music classes in local folk groups and teaches singing. She is happy to conduct musical folklore workshops for children, teenagers and adults.