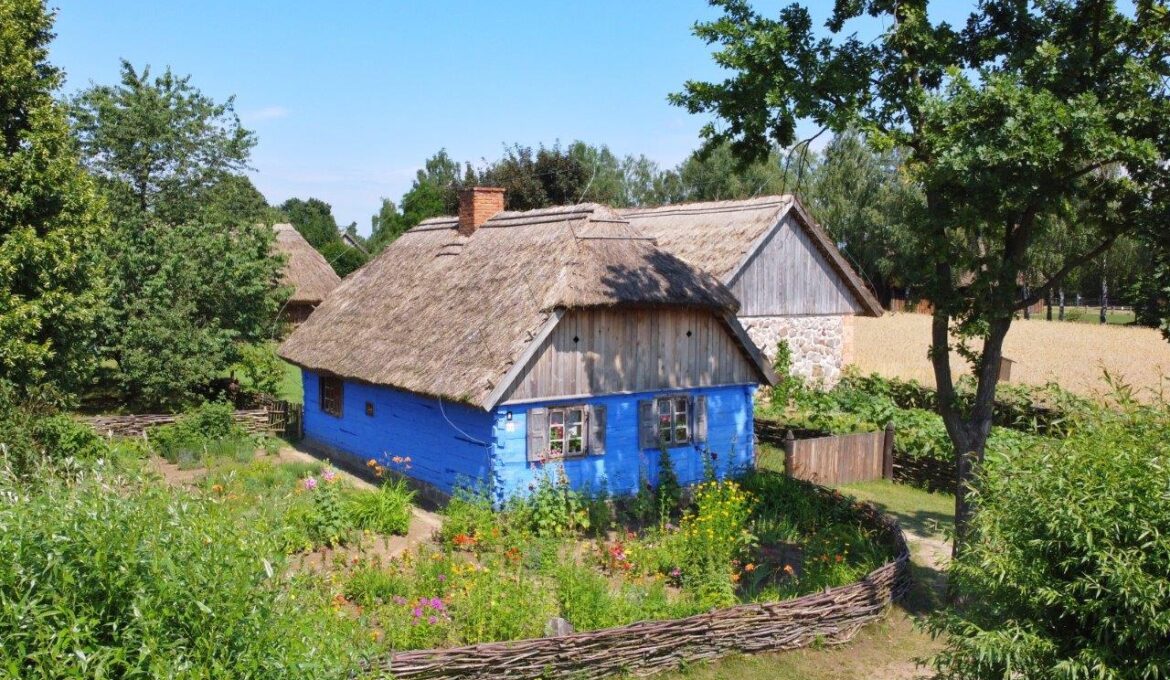 In Sierpc you can find peaceful countryside and most idyllic landscape of Poland waving willow witches. The film directors willingly respond to such greetings seeing the quintessence of the Polish myth in the unusual open air museum with farm animals, farmlands and well-kept gardens next to historic cottages: a noble backwater and the former Eastern Borderlands.

A visit to the museum in Sierpc can be planned for a few days, and you still won’t be able to get to know all its attractions and secrets. It is not a typical open air museum, densely planted with historic huts, but a diverse, very extensive ethnographic park spread over 50 hectares, functioning in accordance with the natural daily and annual rhythm and the calendar of traditional Polish holidays and folk customs.

What does it mean? In the morning, the animals have to be groomed, and before the evening they are herded to hen houses and barns. In spring, grain is sown, harvested in summer, when it is ripe, and in the fall dig out, protect the beehives before it gets frosty, bake wafers before Christmas, and when winter comes to an end, stick to the spring beginning tradition of „Marzanna”.

In the open air museum, you can visit buildings from various towns of Mazovia. A typical post -property linear village was recreated here based on dozens of peasant homesteads from the north – western part of region. You can also see a smithy from Żuromin and manor houses from Bojanów and Uniszek Zawdzkie, around which landscape parks have been created. There is also a wooden church with a bell tower, but film producers and tourists are most fascinated by the inn from Sochocin, where you can eat delicious sour rye soup and local bread with home – made lard.

A unique opportunity to get to know the everyday life of the Masovian countryside will come on May 15th 2021. On the occasion of the International Museum Day, admission to the open air museum will cost only a symbolic PLN 1.

You will be able to see and learn about the daily farm activities related to the household and farm, including: centrifuging milk with a centrifuge, preparation of a peasant meal for everyday or a dinner at the manor, washing on the plate and ironing linen, repair of fishing equipment and even one the first electric TV.

In the pens and on the balks there will be farm animals: horses, goats, sheep, rabbits, ducks, chickens, turkeys and geese. And you will be able to enjoy around 50 hectares of spring greenery!

One hour before closing  the ticket office does not sell tickets.

SIERPC. A CITY WITH TASTE

The story captured in the Sierpc ethnographic park is ideal for filmmakers. Their imagination can change existing places in the open air – museum, for example into distant, idealized Lithuanian homeland „where amber scabies, buckwheat like white snow” or a 17th century estate on the grounds of Ukraine. One of the mansions in Sierpc became Mickiewicz’s Soplicowo in the adaption of Andrzej Wajda with Jankiel’s famous concert taking place in front of the building, slightly retouched for the purposes of the film, and couples dancing a ravishing polonaise dance composed by Wojciech Kilar.

In the Sierpc inn, Zagłoba and Wołodyjowski, the heroes of the film adaptation of „With Fire and Sword” met Bohun. Jerzy Hoffman also made several other scenes of the first part of „Triology” at the Masovian Countryside Museum: a clearing in the ravine of the Sierpienica river became a manor house in Rozłogi, and the Ukrainian wedding was filmed in one of the farms. In „Pan Tadeusz” the museum farms played a noble backwater, and the Żuromin smithy witnessed the march of the Napoleonic army.

The third classic of the Polish cinema, Janusz Machulski used the ready set design that could be found in Sierpc. In the Pohulanka inn he shot some of the shooting for the „Squardom” with Janusz Gajos and Radosław Pazura starring. The screening of Stanisław Rembek’s stories that is an unusual story about the January Uprising shows the Polish – Russian struggle from the perspective of a unit of the Russian dragon.

Rules during the pandemic

The Museum of the Small Town in Bieżuń (a branch of the Masovian Countryside Museum in Sierpc) is closed until further notice.  It is  undergoing modernization and adaptation works until November 2021.