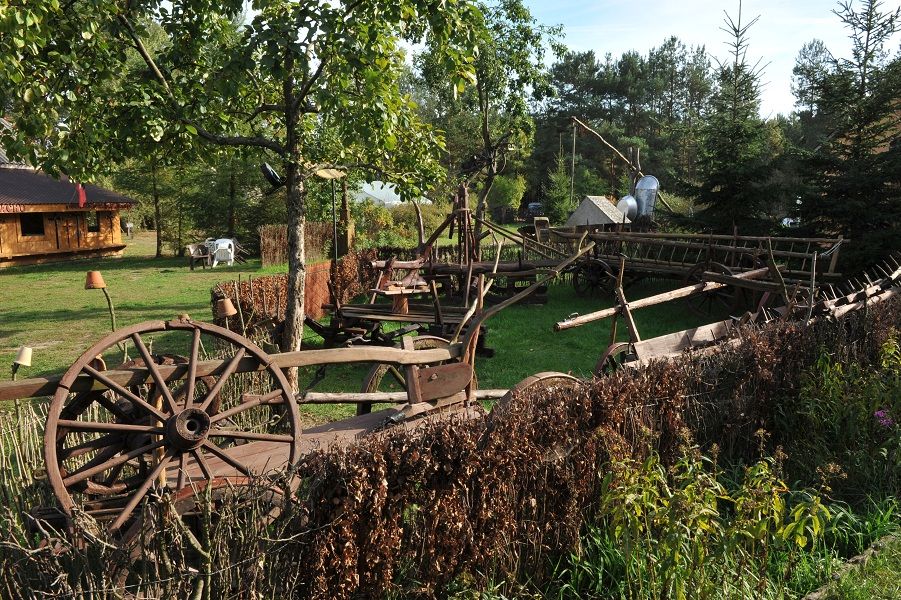 In the beginning that was love. She fell in love with lace, he with amber, and then, they met together and became a family with home, agritourism farm and a largest collection of objects associated with the Kurpie culture. Today it is a magical place that puts a spell on everyone who visits it – the Kurpie Museum in Wach.

A museum unlike any other

Here you can get to know Kurpie Zielone through all senses. There are 15000 items associated with the Kurpie culture that have been housed in a barn converted into an exhibition hall. It was also necessary to provide them with a coach house, and a machine park was also built, where among others you can see agricultural machinery.

This is not a traditional museum where you are not allowed to touch the exhibits, but it is best to take them in your hands during workshops – digging and processing amber, making flowers from tissue paper, combing and breaking flax or making Easter eggs. You can also get familiar with the Kurpie region by listening to Kurpie dialect during the special classes. The sense of smell is useful during herbal workshops.

And yes! Among offers of the Kurpie Museum, created by Zdzisław and Laura Bziukiewicz, there are also culinary workshops and the opportunity to taste such Kurpie delicacies as fafernuchy, rejbak, cabbage with groats, soft crumble and the legendary beer, “psiwo kozicowe”, made of juniper berries.

Report from the visit to the Kurpie Museum

In Wach, we have learned the basic information about the Kurpie region. At the Kurpie Museum, we have seen how life looked like here years ago, when the main activity was cultivating land and preparing food. We have seen the traditional kitchen utensils, e.g. groats, graters, troughs, pitchers, cabbage cutters, pastry bards or mortars for species. The hosts of the Museum, Zdzisław and Laura made us familiar with forgotten devices used in the past.  It is also worth taking a look at culinary workshops, during which the hostess told us about the former cuisine of the Kurpie region and prepared traditional dishes with us. While serving Kurpie dishes, Laura recreated the old recipes written by her mother-in-law before World War II. The authentic flavors of dishes turned out to be a positive surprise! The main message of the Bziukiewicz couple is to make visitors realize that nowadays you can also live according to slow life principles and eat healthy

The best yeast dough in the world and beautiful Kurpie handicrafts. Anyone who has not seen it yet, should regret it