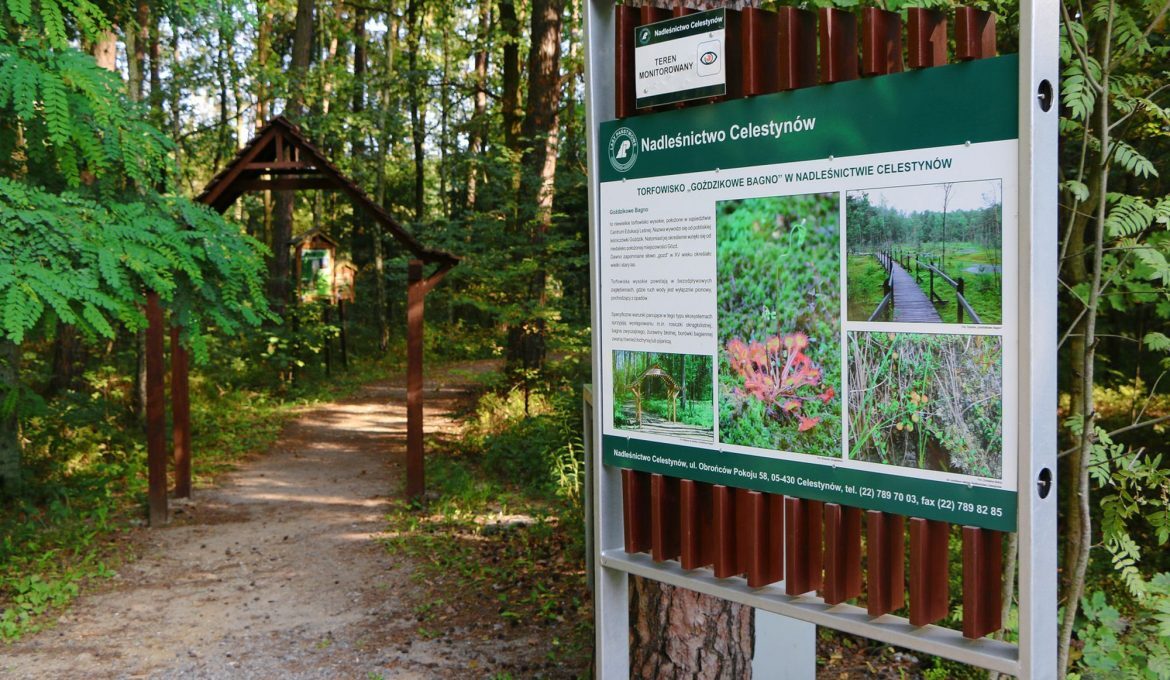 The route with a pirate name of “13 Błota Stóp wokół Bagna Całowanie”, s bicycle route along the Mazovian Village Trail through Reguty and Ponurzyca, and a walk along the Swan Route through peat bogs or a trip to the palace on an island in Otwock Wielki – these are only some of the attractions of the Masovian Landscape Park. The forest line, mainly pine, goes along the Vistula River from Marysin Wawerski to Pilawa and Osieck. The green surroundings of Otwock and Celestynów have been a favorite destination for Warsaw residents for many years. The advantage of these areas is not only easy access, but above all a healthy microclimate in this area and the vicinity of historic places of historical and cultural importance.

How to vist the park – bicycle and educational paths

Selected parts of the Masovian Landscape Park can be visited by walking or cycling, using one of several bicycle and nature paths. One of the most popular is the “13 Błota Stóp wokół Bagna Całowanie”, that is one of the largest peat bogs in Mazovia and a refuge for many bird species: corncrakes, black storks and lesser spotted eagles. The walk is facilitated by wooden platforms over the swamps. An original attraction on the route is the lookout tower, which allows you to watch birds during your spring and autumn hikes. The loop can be reached from the villages of Całowanie and Pękatka.

Another route leading through the marshes is the cycle path Szlakiem Mazowieckich Wsi. As the name suggests, the stops on the nearly 24-kilometer route are villages with traditional Masovian buildings – Regut and Ponurzyca.

Another popular bicycle path leading through the park is a 10-kilometer route through Celestynów – Otwock Forests. The path connects historic sites from the interwar period and World War II. Both paths start at the railway station in Celestynów.

Equally interesting is the Celestynów reserves path starting in the same place, leading through three different reserves around Celestynów, in total there are 14 kilometers of green areas to cover.

The trail “Łabędzi” is ideal for a short walk, is a 1.2 km long section leading to the Educational “Baza Torfy” in Karczew.

There are 12 education boards on the route describing the natural values of the fen. The walk will be facilitated by the mobile application “Swan trail”, available free of charge in Google Play and AppStore.

In Otwock, you can see wooden villas called “świdermajery” with unique decorations inspired by Alpine architecture, and in Otwock Wielki, it is worth visiting the Museum of Interiors set in a Baroque palace on an island.

It is recommended to see “Baza Torfy” in Karczew – the educational center, where you can learn about the natural values of the park and see the ethnographic exhibition of the culture and history of the Kołbiel region. Knowledge about the fauna and flora of the park can also be obtained in the ecological education base at the Directorate of the Masovian Landscape Park in Otwock or in the center Goździk near Celestynów.

History enthusiasts will be interested in the fact that the park contains remains of the German fortified line of the Warsaw suburb. The combat bunkers on Dąbrowiecka Góra are particularly interesting: in one of them (Regelbau 120a) you can see an exhibition presenting the everyday life of soldiers.

PALACE OF THE PARENTS OF THE ROYAL MISTRESS

BY BIKE TO ŚWIDERMAJERY AND THE MASOVIAN LANDSCAPE

In cooperation with the Kurpie Tourist Organization and the Association for the Promotion and Development of the Zegrze Reservoir.