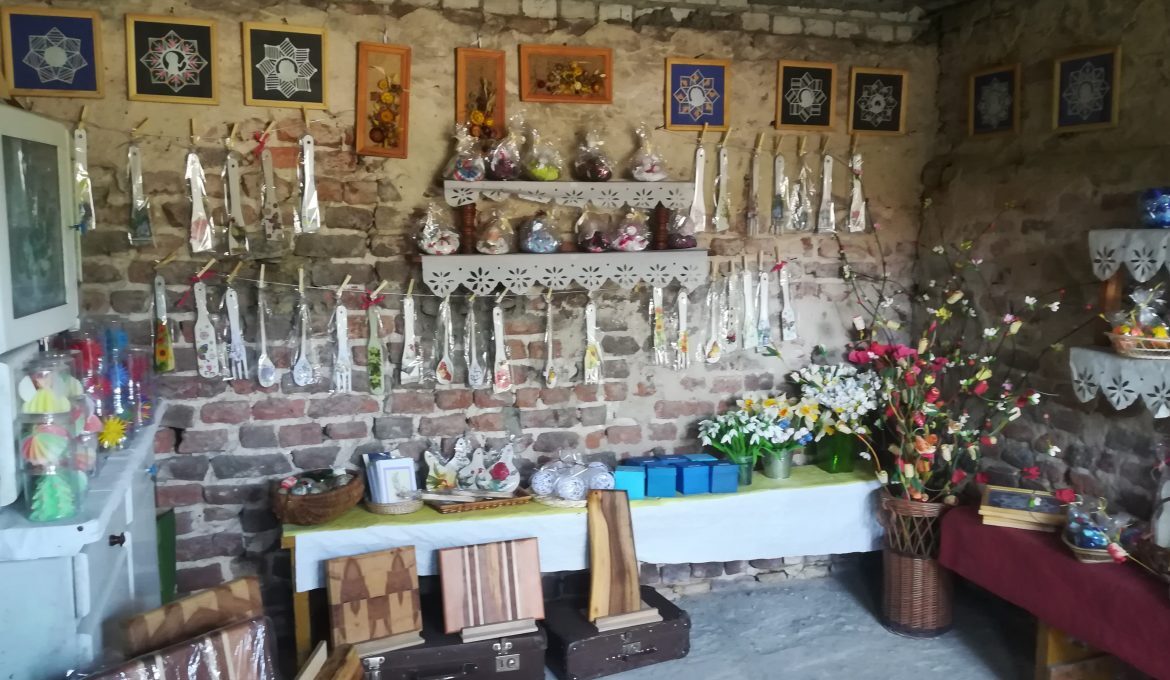 Ewa Mitowska started her adventure with agritourism in 2005. Then, together with her husband and two children, they decided to renovate the old family house from 1947 and adapt it to the needs of guests. They replaced the electrics and the roof sheathing, added two bathrooms and a terrace in front of the house, ordered a new wooden entrance door and old – style windows from a carpenter – oberluft characteristic of the village of Seroczyn, repaired the floors, and finally furnished the rooms with equipment partially renovated by the hosts. Decorations made by Ewa and her friends who are folk artists, were hung on the walls, and woven rugs appeared next to beds. Importantly, they tried to prepare the house for their guests as for themselves so that they would enjoy their stay. The surroundings of the house have also changed in the meantime. Ewa, who is a teacher and folk artist, wanted to pass on her knowledge about traditions and rituals of the countryside to others, especially children. She was conducting ritual and art workshops (palm tree, Easter eggs, wafer cutouts) in Warsaw schools. When she opened the agritourism farm, teachers and students started to come to the countryside. The farmers prepared a barn for them. In part of the building, the “Regional Souvenirs” Museum” was established, where exhibits useful in the household and farm of the former village were collected. Since 2015, Mitowska Farm has belonged to the National Network of Educational Farms.

Various enthusiasts come to the farm. April, when there are still frosts, but snowdrops and daffodils are already blooming, is the time when photography enthusiasts stay in the early morning to take pictures of dreamy dew drops. The effect is unearthly, but the clothes get soaked.

While taking pictures, a photographer allowed the ant to “bite” to catch the right light. These stays resulted in a series of wonderful photos of the local area. During a longer stay, guests help with weeding the flower beds on their own initiative, while others mow grass. Sometimes it happens that they remove plants from the flower bed that later start vegetation. This is what happened with lavender, when only 2 of 19 bushes survived, but the garden gained sedum and roses. Now, laughing, everyone remembers this “lavender episode”.

Many guests come back for great food. The farm mainly serves regional dishes prepared with products produced in the area.  The sorrel borscht with potatoes and pancake with apple is a local hit. However, these treats are served at the end of the stay, because if they were served on the first day, guests ask for them every day!

The Castle in Liw is a Gothic stronghold, the origins date back to the first half of the 15th  century. In the 15th century, it was built on the order of Duke of Mazovia Janusz I the Elder on Liwiec River, which was then the border of the Duchy of Mazovia and Lithuania. Since 1963, it has been the seat of the Armory Museum at the Castle in Liw. The museum displays military items from all over the world from Roman monuments to 20th century weapons.

It is also worth visiting the palace and the park complex in Korczewo in the area. It consists of a classicist brick palace, a pavilion of Siberia, and outbuilding, a chapel, a well with a figure of St. John of Nepomuk and the guardhouse.

In Ciechanowiec, there is the Agricultural Museum of Fr. Krzysztof Kluk, one of the two agricultural museums in Poland with about 30 thousands exhibits. Among many exhibitions, the attraction is the only Easter Egg Museum with a collection of 2 203 eggs from around the world. The collection also includes Easter eggs made by Ewa Mitowska.

“Sękacz” is by definition, a pastry made of sponge – fat dough, baked over open fire on a rotating wooden spit in the shape of a cylinder or an elongated cone. Currently, it is a popular cake that comes from the traditions of the former Eastern Borderlands. In today’s Poland, sękacz remains a regional specialty of the Suwałki and Podlasie regions. Considered luxurious, and difficult to make, but also delicious, sękacz has been called the “royal cake”.

Where did the name “sękacz” come from?

Ready – it has a conical shape and resembles a cut tree trunk. As a result of pouring successive layers of dough on the roller, visible, thicker, light layers are formed in the cross – section of the tree cake, separated by dark layers, baked over the fire, resembling annual growths in a tree trunk, e.g. the so -called rings. On the other hand, the excess of dough flowing during baking creates solidified icicles, imitating knots.

There are many legends associated with the creation of the first sękacz, but the most numerous trails lead to the areas located between today’s Masuria, Lithuania and Belarus. One of the theories says that the cake is said to have been invented by the Tatars, for whom  baking over a fire, without an oven, was the only option. Together with the Tatars settled by prince Witold in the Grand Duchy of Lithuania, the sękacz found their way to the territories of Poland at that time. Others claim that baumkuchen was brought to Poland by the Teutonic Knights, who enjoyed it during numerous invasions on the country and areas of northern Europe. Another German thread also appears in the history of sękacz. Until the 15th century, monumental Gothic cathedrals were erected in Europe. Egg whites were used as mortar and binder in those days. It is possible that practical Germans, wishing to use the remaining yolks gathered in huge vats, invented this flowing fat – biscuit dough?

According to some sources, the first sękacz was served at the court of Bereżniki near Sejny to Queen Bona herself. She was delighted with this unique cake and decided that it would be the decoration of the wedding table at the wedding of her son Zygmunt August. Still others claim that sękacz arrived from the east, through the Russian court and that it was introduced by the confectioners of the wife of Tsar Nicholas II, the German princess Alexandra Fiodorovna.

Visiting Mitowska’s farm is worth taking part in the events offered in the area. The Tournament of Tastes on Wielki Gościniec at the end of June is extremely attractive. On the grounds near the Castle of the Dukes of Mazovia in Liw, there are stalls with handicrafts and food products. There are  many cooking shows worth attending.

Open Gate is an Ecological Fair in Hołowienki near Nowa Wieś Kosowska. There you can find organic products from certified producers.

The Bread Festival is the August offering of the Agricultural Museum in Ciechanowiec. Several hundred exhibits with handicrafts and food present themselves in the open – air museum. The beginning of September is associated with a large sports event at the Niewiadoma Lagoon. The Sokołowiska RUNda program includes runs for 5 and 10 kilometers around the reservoir.

In autumn, Hubertus takes place at the Maciej stable in Seroczn Kolonia and at the Masovian Stud in Nowa Wieś Kosowska.

The Mitowska Farm is open seasonally from April to the end of October, but the Educational Farm accepts groups all year round. The farm is categorized by the Polish Federation of Rural Tourism “Guest Farms” and has two suns in the “Farmer’s Rest” category.

A detached one-story house has been prepared for guests. There are three rooms, two double and one for 4 people. There is a lounge in the center of the house. The fully equipped kitchen is connected to the dining area. The dishes served on the farm are prepared from own products and from local suppliers. The vegetables and fruit are processed on the spot (pickles, jams, preserves), and served with meals. Guests can also prepare their own preserves of vegetables and fruits, pick berries and mushrooms, that can be dried over the tiled kitchen. The farm belongs to the Masovian Culinary Heritage Network. Products with the logo of the chain are: dandelion syrup, cold soup, fruit liqueur, apple and carrot drink, sękacz, poppy seed dumplings, pie, chicken ruff, pork neck in herbs with garlic potatoes and cranberry sauce, duck with apples, stuffed pike, fish soup with meatballs, sorrel borscht on ribs with egg and potatoes, medallions of pork tenderloin with goat cheese, smoked ham, stewed zucchini and barley groats made of water. The Educational Farm located in the barns is divided into three zones:

1.“Regional memorabilia” museum, where the equipment and tools used in the past in the countryside are collected.

2. Place for workshops and meals for 50 people

3. Playground (in case it rains)

The owner of the farm is Ewa Mitowska, a folk artist dealing with ritual and decorative arts. She is interested in the history and culture of the countryside. Ewa’s passion is creating new patterns of Easter eggs and wafer cutouts, as well as passing the knowledge and skills. She is looking for recipes for regional dishes and taking part in the culinary competitions and also winning them. While creating the Museum of “Regional Souvenirs” she cooperates with the residents of Seroczyn and the surrounding villages, who donate old items found in the attics during cleaning of facilities.