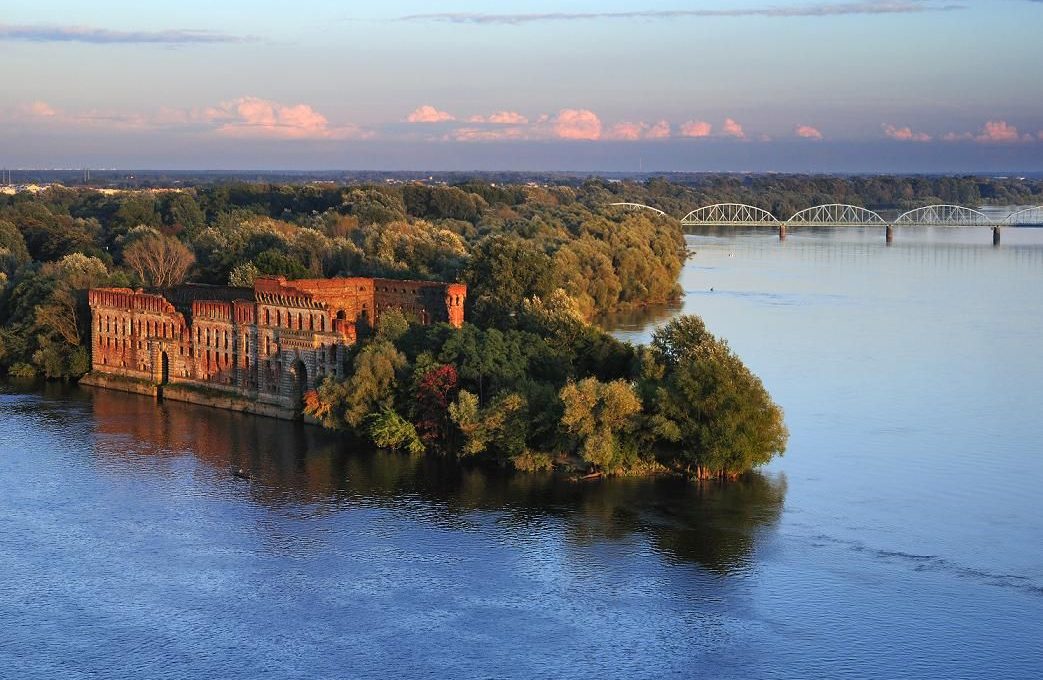 The Modlin Fortress is a real star among the places chosen by filmmakers for the open – air locations.  Enchanting landscapes, a fascinating founding legend, amazing, unique buildings and defensive structure, as well as interesting, diverse interiors have attracted the most outstanding directors over the years. It was here that scenes of such films and series were shot for: „CK Dezerterzy”, „Wesele”, „Pan Tadeusz”, „Pułkownik Kwiatkowski”, „1920. Bitwa Warszawska” or „Czas Honoru”.

Fortress of the French, Russians and Poles

The Modlin Fortress is an extraordinary place, one of the largest and best – preserved fortress complexes in Poland with the longest building in Europe and  the second in this respect in the world – defensive barracks with a length of over 2 kilometers, that could accommodate up to 100 000 people!

Fantastic defensive conditions at the confluence of three rivers – the Vistula, the Narew and the Wkra were created by nature, and Napoleon Bonaparte put an end to it by ordering to build fortifications in this place.

The fortress has been extended many times and contains elements of the French, Russian and Polish fortifications. The last modernization before the outbreak of World War I was carried out by the Russians. At that time, ten concrete forts with reinforced concrete covers and steel armored turrets were built, forming the second ring of forts within a radius of 5 to 10 km from the citadel. On Piłsudski’s personal order, the Poles added six combat bunkers, as well as anti-tank ditches and field fortifications to the existing fortifications.

Filming around the Modlin fortress

The Local Tourism Organization of the Three Rivers (www.3rzeki.pl), that operates in Nowy Dwór Mazowiecki, and thus in the Modlin Fortress, has created various forms of getting to know the historic fortress. The original program of visiting the fortress, prepared especially for children, is very interesting, for example visiting the fortress with Baśka Murmańska, a white bear who lived in Modlin in the inter war period together with Polish soldiers. It was also a film route that was created, taking into account the production of the most popular cinema pictures and series in the fortress.

Here are the next stops of the movie and filming tour:

The Modlin station – you can see the station in the movie „Tam i z powrotem”  as Głusk station, where Jurek, played by Jan Frycz got off

The Captioner of Colonel Meciszewski – here were shot the pictures for the  „Jarosław Dąbrowski” film and the inscription on the wall facing the stairs are remnants of this production.

The Napoleon’s Gate – appeared in the series „Kryminalni”

Granary – one of the favorite buildings of filmmakers used as the Horeszków castle in „Pan Tadeusz” by Wajda, as well as in the aforementioned „Jarosław Dąbrowski”, and in „Złota Kaczka”, and the Japanese cyberpunk dystopia „Avalon” with Małgorzata Foremniak in the main role. It was also used on the set of the sensational movie with Steven Seagal „Cudzoziemiec”.

The Dehn’s cannon station – the building appeared in the Wajda’s „Wesele” and in the Polish – Czech production of „Operacja Dunaj”.

The Citadel – was used among others in Hoffman’s firm „1920. Bitwa Warszawska” and in the series „Czas honoru”.

The Poniatowski Gate – the building is certainly remembered by the fans of „CK Dezerterzy”, it is visible in the final scene of the film, when the soldiers leave the barracks. He also appeared in the blockbuster „1920, Bitwa Warszawska”.

The Tatar Tower (also known as the Red Tower) – this area is a real filming basin. The scenes of, among others, such films as “Róża”, “Szpital nad Sommą”, “W ciemności”, the series “Przeprowadzki”, the mentioned “1920. Bitwa Warszawska ”and“ CK Dezerterzy ” were shot here. The tower and its buildings also appeared in the series “Czas honoru” as  a training camp for British commandos.

Next to the Casino, there is an information board on the „Mazovia Filming” trail with lots of information about the productions carried out at the fortress.