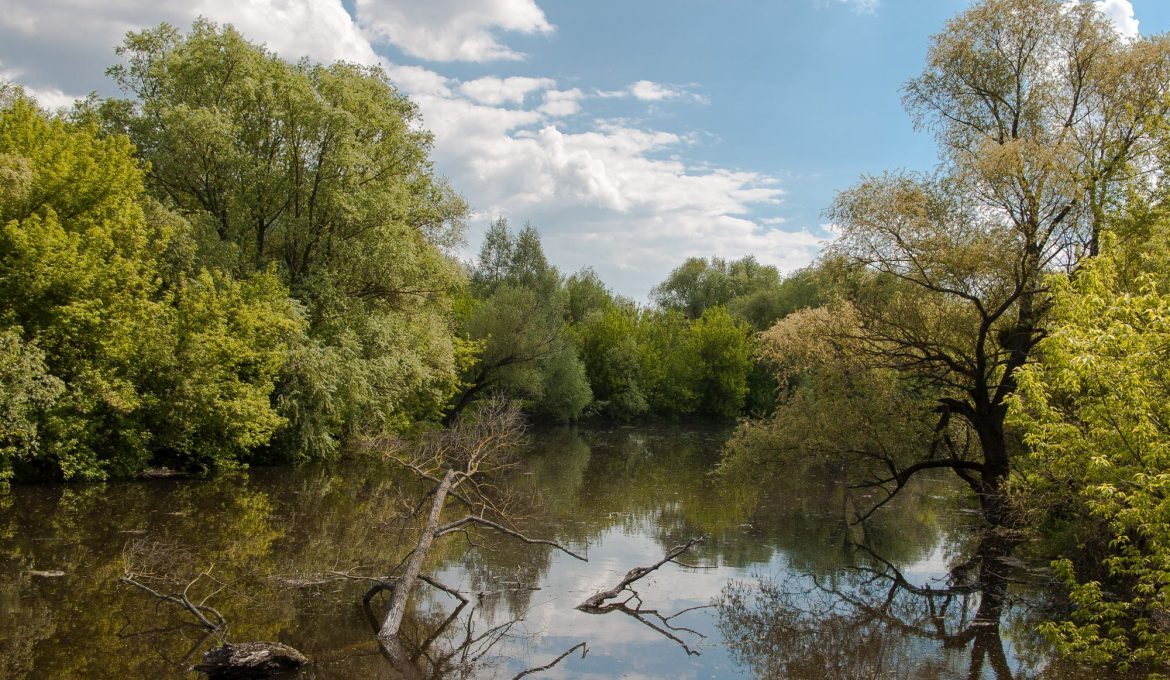 The Bug Valley with oxbow lakes, picturesque meanders, islands, islets, sandbanks, bays and around pine forests, wet forests and sand dunes bordering peat bogs. Maybe not wild, but not too many people. Perfect areas for lovers of canoeing, bicycle rallies and hiking.

In addition, such treasures of history as the castle in Liw, the palace in Stara Wieś, the basilica and the entire Hungarians have an amazing, multicultural atmosphere. Because the Bug Landscape Park is a borderland with three historical and ethnographic regions intertwined – Mazowsze, Kurpie and Podlasie. One of the largest landscape parks in Poland.

How to visit the park – the most interesting nature paths

Several hiking trails and educational paths lead through the park and will allow you to get to know most interesting natural spots and historical places. Here are the most interesting ones:

The 9 – kilometer trail of Kalęczyńskie Lakes starts in the village of Huta Gruszczno. The main attraction of the route running through the “Moczydło” reserve are small water reservoirs that are the remains of former glacial lakes.

The Huta Gruszczyno – Treblinka path, 31-kilometers long, is best to comeby bike. Similar to the route described above, this one also goes around the Kałęczyńskie Lake and then goes through the villages: Stoczek, Miedzna and Kosów Lacki, showing the traditional buildings of Masovian villages. The final stop is the former extermination camp in Treblinka.

The Jerzyska path is 3km long and starts at the Jerzyska forest’s lodge. It runs along the Łojewski Canal and the Jegiel Reserve. It is ideal for a short walk, starts in the village of Sadowne and leads through the bog with rare species of birds and butterflies.

A trip along the 18-kilometer trail in the footsteps of stork nests is the opportunity to see 120 white stork nests. The starting point is in Morzyczyn Włościański.

More information about the fauna and flora of the park can be obtained in the ecological center located in the headquarters of the Bug Landscape Park in Kaliska. It is located in a palace belonging to the family of the famous pianist Ignacy Paderewski ( a separate exhibition is dedicated to the Polish patriot).

There are many interesting places associated with the history of the region on the map of the Valley of Dolny Bug.

In Liw there are ruins of the Gothic Dukes Castle from the 15th century and you can visit the restored manor house and the Gate Tower. In Węgrów there is a smaller basilica with a magic mirror of the legendary Jan Twardowski.

Other places worth recommending on the sightseeing route are towns with historic palaces and manors – Stara Wieś, Korczew, Łochów and Ceranów.

In Kosów Lacki you can see spatial arrangement with a rare shape of the market square that has been preserved. The town is dominated by a neo – Gothic church that is the most magnificent sacred building in Podlasie. In the parish of the church ,the painting “Ecstasy of St.Francis: El Greco’, that’ is currently shown at the Diocesan Museum in Siedlce.

In Brok there is a Renaissance church from the 16th century, the ruins of the castle of Płock bishops and a Jewish cemetery from the end of the 18th century. The city is also worth visiting in July, when the “Days of Broka and Biała Forest ” are held with cencerts, exhibitions and sports competitions.

In Kamieńczyk there isa private Ethnographic and Historical Museum with collections related to rafting and life in the Bug valley, and in Treblinka, on the site of the former death and labor camp, there is the Museum of Struggle and Martyrdom. Fans of active leisure can take advantage of the possibility of canoeing on the Liwiec or Bug river.

It will take -3 hours to cover the Liwiec route from the village of Puste Łąki to Kamieńczyk, and a 12-kilometer long rafting trip on the Bug from Szumin to Kamieńczyk should take 3-4 hours.

The richest in the park are communities of water, rush and marsh plants.

There are species rare in Europe, such as the violet, Pemeranian honeysuckle, mountain oliver and the cuckoo orchid. Among animals, the largest group of rare species are birds that nest in wetland and in river valleys, including the curlew, common tern, dipper and gray heron. The kingfisher and the Sand Swallow live in burrows on the riverside slopes.

In Cooperation with the Kurpiowska Tourist Organization and the Association for the Promotion and Development of the Zegrze Reservoir.