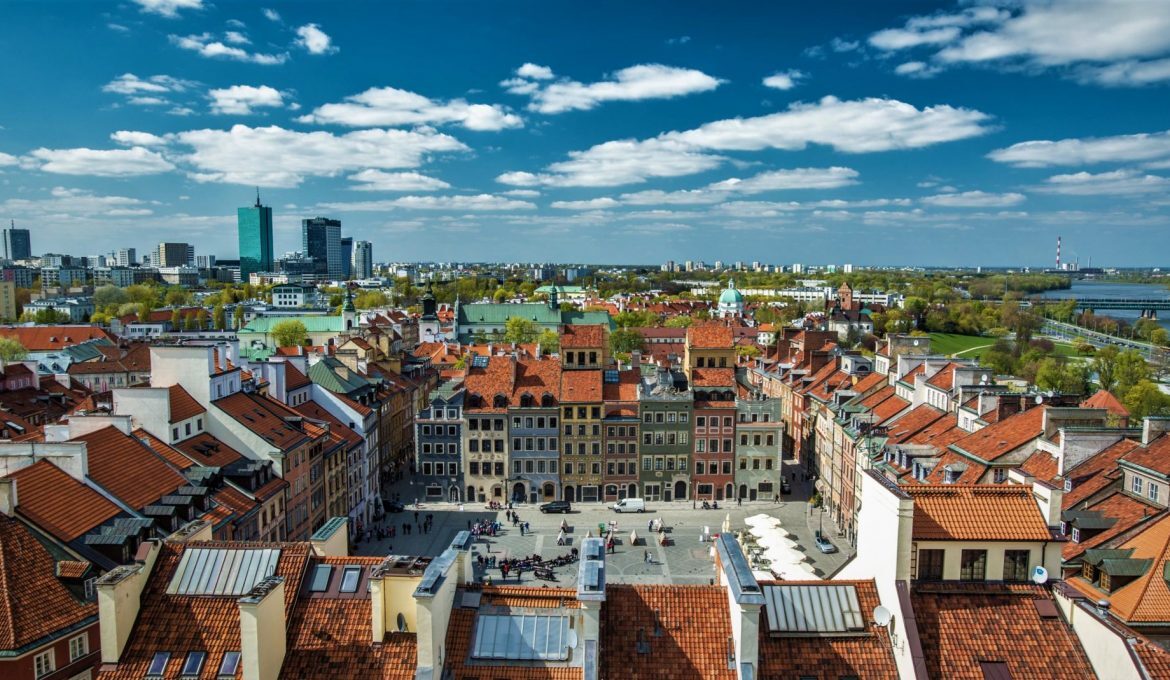 The Old Town Square in Warsaw, photo by Bartosz Bobkowski

Warsaw offers many options for enthusiasts of film tourism. It is here that most artists live permanently as well as many films are produced in the film studios and open air locations. There are studios, film schools, televisions, museums, libraries and research centers, as well as iconic places known for cinema blockbusters, popular and niche films and series.

In Warsaw you can visit various places connected with filming, such as Aleja Gwiazd at the Wiecha Pasaż, places visited by artists or even the ones that belong to them, places related to their life and work. You can also take part in film events, some of them such as the Warsaw Film Festival are attended by fans of the Tenth Muse from all over Poland. It is in the capital that the most castings, meetings with stars, exhibitions and per-premiere screening with the participation of enthusiasts are able not only to get information about the locations where movies are currently being shot, but they also have information on how to get on the set!

Nowhere else are there so many tours of specific films and creators. On the left bank, the most popular are walks (there are also field games) related to Stanisław Bareja’s comedies, as well as with Wokulski and other characters from „Lalka”. Although in the latter case the literary prototype is sometimes more important than the screen adaption. In Praga, where Roman Polański made a film about Władysław Szpilman, you can follow the footsteps of „The Pianist.”

But the most common form of set jetting is, of course, traveling to places immortalized in movies and series.

THE BIGGEST FILM STARS OF WARSAW

The Palace of Culture

The Palace of Culture and Science called PKiN is the place that is loved or hated. It appears in many film productions about Warsaw and with Warsaw in the background. In „Rewers” by Borys Lankosz, you can see a large square in the city center, buried for the construction of the Palace of Culture and Science (used by the heroine of the movie in a very special way!) and the finished building in the finale of the movie.

The interiors of the Palace of Culture and Science appeared also in some other productions. In front of the ticket offices of the Dramatyczny Theater, the title characters of Janusz Kodratiuk’s „Dziewczyny do wzięcia” were trying to attract the attention of the popular actor Stanisław Mikulski, and Ryszard Ochódzki starring in „Miś” met with the Minister Złotnicki on the terrace of the 30th floor. The Commissioner Halski from the TV series „Ekstradycja” also used to choose the Palace of Culture and Science for meetings, while Agnieszka Holland in the film „Europe, Europe” turned the interior, and more precisely the swimming pool inside the Palace, into a Hitlerjugend school.

Every now and then the topic of getting rid of the „Stalin’s gift” comes back like a boomerang. The heroes of „Kiler”came up with the idea of selling the building to foreign investors, while Ryszard Ochódzki managed the completely destroy the Palace of Culture and Science in Sylwester Chęciński’s comedy „Rozmowy kontrolowane”. It was like a children’s play only to pull the flush….

The latest film with PKiN in the leading role will hit the screens of Polish cinemas in November 2019, but in September it had its world premiere. This is the international thriller „Ukryta Gra” with Bill Pullman (USA) and Evgeniy Sidikhin (Russia) and Robert Więckiewicz as director of the Palace of Culture.

It is here, by the historic fountain, that the heroes of the romantic comedy „Tylko mnie kochaj” met and it was also in that place that the title hero of „Oh, Karol” made an appointment with one of the chosen ones. Nikifor Krynicki of the biographical „Mój Nikofor” played  by the phenomenal Krystyna Feldman, escaped to the beautiful park from his own vernissage at the nearby Zachęta.

It was built in the mid 1970s as one of the capitol’s most luxurious hotels. It hosted Ronald Reagan, Prince Albert, Stevie Wonder and Elton John. It is also here that Rysiek and Julek, friends by chance, the heroes of the „Wielka Majówka” rented an apartment.

The Church of St. Antoni Padewski

It was here in the cloisters of the historic church in Senatorska Street, where Colonel Kukliński  met with the CIA agent David Forden in „Jack Strong” by Władysław Pasikowski. And also the Jankowski family, the main characters of the popular series from the 1960s „Wojna domowa” , lived in a block of flats opposite the church.

The symbol of the exile from the People’s Republic of Poland in 1968 of several thousands Poles of the Jewish origin, became the title character of the famous documentary by Teresa Torańska and Maria Zmarz – Koczanowicz. The same theme also comes in different movies: Jan Kidawa Błoński in the film „Różyczka” ending with the departure from the Gdańsk Railway Station.

Stanisław Bareja showed the Gdański Railway Station in the context of communist absurdities (more to read on the Bareja’s list).

The bridge connecting the left bank with Praga was immortalized in one of the most romantic scenes of the Polish cinema: in the finale of the romantic comedy „Nigdy w życiu!” with Danuta Stenka in the leading role. The car of the main character was trying to stop her beloved from leaving Poland and got stuck on the bridge as there was no gasoline.

It was also here that Edyta Bartosiewicz’s song „Opowieść” was filmed.

Nowa Praga with its tenements not looking new and the compact buildings  resembling the streets of pre-war Warsaw, is eagerly used by film producers making movies about the capital of the inter war period and about war. This is where Barbara Sas’s „Dziewczęta z Nowolipek” was filmed, as well as some scenes from „Korczak” by Andrzej Wajda with the Mała street shown as Warsaw ghetto. It was similar to the shots by Roman Polański from „The Pianist”.  Walking tours of the Oscar – winning production also include Stalowa and Konopacka streets.

The important spots from the Bareja films:

Scene: The Łazienkowska Route is just under construction. The character of the movie facing Powiśle, rides a bicycle to the excavation in the area of Na Rozdrożu Square.

Scene” The station full of passengers is closed”

Bareism: „Attention, please be informed that due to the railway poster exhibition „Traveling by rail shortens time”, the station will be closed until further notice.

Scene: During a tram breakdown, there is a „passenger festival” organized at the tram terminus.

Bareism: „Take advantage of the occasion, because a breakdown created opportunity for our passengers, hard working people, because they can watch the artistic program in the meantime”.

“This is exactly the block!”

Scene: the dispatching room of the Siekierki plant, energy crisis, the switching of one of the supply lines is decided. The dispatcher argues that the most losses are on the line leading to Ursynów.

Bareism: „It is unheard. We are loosing 150 percent of the heat!”

Scene: Kasia and Jacek are dating in the rain

The Block of flats at 10 Kazury Street in Ursynów

It did not appear in the movie, but there is a mural with most famous Polish caretaker, Stanisław Anioł, created in 2016.