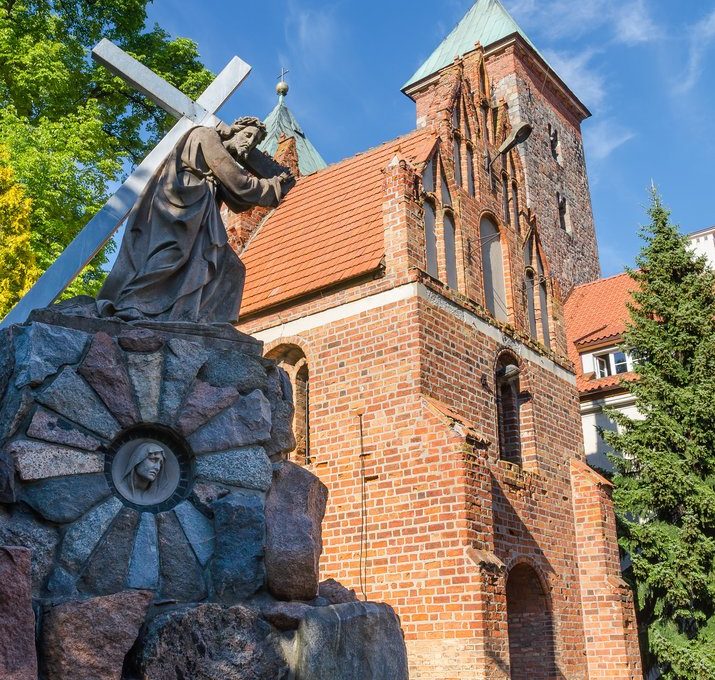 On the bank of the Vistula, between Wyszogród and Nowy Dwór Mazowiecki, there is a small town with unique Romanesque monuments on a national scale, an interesting urban layout, a mission museum with exhibits from around the world, and extraordinary history and a beautiful panorama of the valley of the queen of Polish rivers from the Vistula embankment. A few years ago Czerwińsk gained another advantage: the staging of the “Mystery of Passion”, that attracts thousands of pilgrims to the Salesian Fathers’ convent during Lent weekends.

The “Mystery of Passion” is one of the most famous Polish passion mysteries. Its authors are the Salesian: Fr. Dr. Franciszek Harazim wrote the text, and the music is the work of an outstanding composer, Fr Dr. Antoni Hlond  signing his works with the pseudonym “Antoni Chlondowski”.

For the first time, “Mystery of Passion” was staged on March 8, 1931 in Kraków, and after World War II it was moved to Czerwińsk, and first staged in the local monastery in 1949. “Mystery of Passion” became part of the Masovian tradition, attracting audiences from all over Poland.

For many years the performers of the show were the Salesian novices. After the liquidation of the novitiate in Czerwińsk, the “Mystery” ceased to be exhibited in this town. In 2014 the Salesians returned to the Lenten tradition and, seeing the great interest of the faithful, decided to continue it. Actors and professional musicians as well as young people from Salesian groups participate in the contemporary production directed by Mariusz Wąsowski.

A monument of the highest class in Czerwińsk is a two – tower Romanesque basilica with a surrounding monastery complex. The construction of the temple, funded by the bishop of Płock, Alexander of Mallone, began in the third decade of the 12th century. A huge Romanesque portal comes from the middle of this century, probably made in Italy in the workshop of Wiligelm of Modena. According to legend, Polish knights headed by King Władysław Jagiełlo to the field of Grunwald sharpened their swords at the two smooth columns of the portal. Not far from here, they crossed the Vistula River on the skate bridge to join the Lithuanian forces of Prince Witold.

While visiting the basilica, one should not miss the Romanesque frescoes, it is probably the largest collection of 13th century wall paintings in Poland.

After leaving the church, you can knock at the monastery and ask for a tour of the local museum, that presents souvenirs from the missionary journeys of the Salesians to various parts of the world. And later, it is worth taking a stroll through the streets of the former city, because its urban layout with historic residential buildings is another treasure of Czerwińsk.

The sanctuary is open to tourists all year round.

After agreement, you can visit the Salesian mission museum in the local monastery. During Lent, you can take part in a retreat and take part in the “Mystery of Passion”. Before that, you should reserve a place via the website misterium.bosko.pl.

NEARBY PLACES WORTH VISITING: PŁOCK