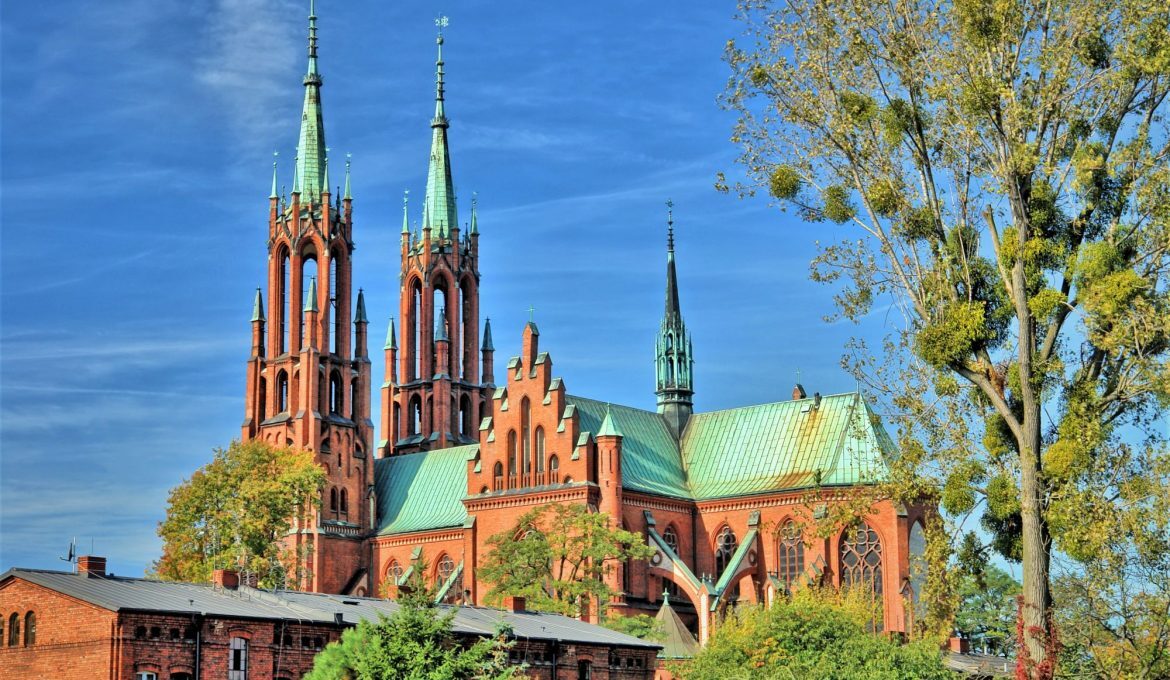 Parish Church of Our Lady of Consolation in Żyrardów

It was a little romantic village of Ruda Guzowska in this place at the beginning of the 19th century.  At the end of the 1820s, the construction of a new linen factory took place moving from to Pisia Gągolina River from Marymont near Warsaw. The factory started operating in 1833 on machines designed by a French engineer who invented, among others, a flax fiber spinning machine (it spun 150 km of thread from a kilogram of flax!), a flax brush, a machine for the production of flax yarn from tow and many other wonderful improvements of the textile industry. His name was Filip de Girard, and the name of a new factory settlement located west of Warsaw was Żyrardów derived from his last name. Almost the entire history of the place from the establishment of the first factory, residential buildings for owners, managers and workers, through the industrial boom in the 1880s, when 16 000 spindles were roaring at the same time in the spinning mill – to this day remains written in walls, cobblestones and…parks and greenery. Żyrardów was built as a factory settlement and as a garden city, where green areas and vegetation were an important compositional and functional element of the entire urban organism.

For a short time, at the end of the 20th century, it seemed that all this remarkable post- industrial heritage would be lost and would only function in a few lofts and shops. New ideas for the development of the factory settlement, which survived in 95%, were brought in the 21st century creating a unique place on the European scale, where the story about the heyday of the industrial era in Mazovia is constantly being expanded.

Band-saw and other museum machines

It is best to start learning about the history of the former industrial settlement at the Linen Museum, that was established in one of the former factory buildings. Today, you can see several historic machines that make up a complete technological line. Thanks to them, it is possible to imagine and even recreate, which is sometimes used during shows and workshops, the most important elements of the linen processing and fabric production process. Most of the machines come form the last years of the factory’s operation, 1970s and 1980s, but the collection also includes unique exhibits from the beginning of the 20th century.

You can see here, among others, large size industrial machines, such as a band – saw, a drum rewinder or a warp fusing machine, and other elements of the linen factory equipment used in the production process between spinning and weaving. One of the biggest attractions is a fully functional mixer for preparing plywood for gluing warps.

The largest screen printing collection in the world

The Linen Museum is located in the former printing house of the factory in Żyrardów. Here the templates were prepared and multi-colored patterns were printed: floral, animal and abstract motifs, festive or occasional patterns. Many Polish families still have colorful tablecloths, colorful memories of the former Linen Factory in Żyrardów.

The beginnings of screen printing can be found in China even before the 12th century. The Japanese made use of the achievements of the Chinese, who used silk-screen printing do dye kimono fabrics. It was not until the 17th century that the turn of Europe came, and the factory in Żyrardów started using the technique to decorate fabrics in the inter war period of the 20th century. Initially, the production was based on manual printing, which in 1960 was mechanized and developed on an industrial scale, serving for the automated printing of large and complex multi – color patterns. More precisely: in the Linen Factory in Żyrardów, the technique of flat film screen printing was used. It consists in spreading the paint with a movable squeegee over the entire surface of the screen printing template (a mesh with a pattern stretched over the frame) and forcing it through the open mesh of the mesh. The use of screen printing in the textile industry was very efficient and repeatable due to the possibility of multiple use of once prepared templates.

The closure of the factory in 1999 meant the end of production, and therefore dyeing of fabrics. Most of the screen printing templates were scrapped. Fortunately, some of them (over 600 pieces) survived and found their way to the Linen Museum in Żyrardów, creating the world’s largest collection on large-format screen printing templates. Dozens of them were presented at the exhibition „Woven sieves”.

A unique layout of a complex of post-industrial factory buildings and a track that facilitates plant communication is included in the nineteenth factory settlement recognized as a historical monument. No train is running on the tracks any longer, but the inhabitants of Żyrardów can again hear the sound of the only locomotive that has survived from the former Linen Factory. The factory track in Żyrardów, used for transporting production materials between the various departments of the factory, was established as a siding of the Warsaw – Vienna Railway and played an extremely important role in the processing of linen raw material. The railway infrastructure remained unchanged and served the workers of Żyrardów even in the 1980s.

Out of thousands of locomotives moving rapidly along the iron track, only one has miraculously survived to this day. After the fall of the Linen Factory, the residents of Żyrardów saw the „choo – choo” train only from a distance in the area of VT ENERGO. Rusty and unusable, it was sold for scrap. Thanks to people of good will, it was possible to save it from destruction.

At the beginning of 2015, the 409Da-271 locomotive became the property of the Linen Museum, where it stood in the museum parking lot for over 2 years. In order to save from oblivion a beautiful symbol of the Linen Factory, which was prospering years ago, a decision was finally made to transport it to the square in front of the Linen Museum, where it still dignifies tourists to this day. Thanks to the involvement of the Makiety i Dioramy Kolejowe Group, the locomotive was thoroughly revitalized.

The unusual surroundings and industrial interiors are more and more often used by filmmakers and musicians. Some of Megitza and Leski’s music videos were produced in Żyrardów.

The city also become the main setting for the action of the series „Archivist”. The main star of the TV production was the former management building and the main office of Towarzystwo Akcyjne Zakłady Żyrardowskie. The huge red brick building, built in 1885 and called Kantor to distinguish if from the small factory offices, played the role of the police headquarters in the series. Build on the plan of the letter H and expanded in 1896 with a conference room, the building is one of the most interesting historic buildings in Żyrardów. Auster exterior, although imposing in size, the interior is lavish, leaving no doubt that this is where the heart and command center of a large enterprise once stood. Oak paneling on the walls, ceilings and doors lined with  wood, and in the staircase, decorative elements such as cast – iron columns and a decorative balustrade, which have been preserved to this day, ask for filming.

Also the immediate surrounding of Kantor is a ready made, wildly attractive film set. The building is adjacent to the Park Karol August Dittrich, designed as a landscape park by the valued gardener of the Warsaw Botanical Garden, Karol Sparmann. There is a beautifully renovated historic villa of Dittrich located in the park, now the seat of the Museum of Western Mazovia.

THE CITY- GARDEN BEFORE IT BECOMES FASHIONABLE

Żyrardów is famous not only for its linen traditions and a unique factory settlement on a European scale, but also it was a precursor to the idea of a „garden – city”.

Thanks to the recent revalorization of the urban green areas, it was possible to expose the original assumptions of the creators  of the factory settlement, in which the greenery was an important compositional and functional element. The greenery surrounds the monumental buildings of the former factory, fills the yards of workers’ houses and contrasts with the red brick – this is the essence of Żyrardów!

Let’s go through the whole city along the green trail, visiting its most important points. The Partyzantów Avenue leads from the railway station to the historic factory settlement with the newly developed area of the first park for workers. The entire park and walking paths are surrounded by low hedges. The chestnut alleys were restored, large lindens and maples are also planted there. Plant species such as euonymus, elderberry, privet, guelder rose, moosy sage, geranium and loosestrife appeare here.

The factory settlement can be reached via Kościuszki Street. The two-lane street running along the quarters of workers’ houses has completely changed its face. The old linden alley was supplemented with young trees, and the stripes along the roadway were decorated with groups of perennials and shrubs. Cranes bill rustle here, euonymus, ground elder, and the order of composition is introduced by hedges made of lingusters.

Once you reach the heart of the factory settlement: John Paul II Square, you can see symmetrical arrangement of plantings emphasizing the nature of the place. It is a former market square with a church called the little cathedral of Cologne, because it is a representation of it, but four times smaller. From here, it is only a few steps to reach the main gate of the former factory. You can enter a post – industrial area called the Headquarters, where monumental post – industrial buildings dominate. Among them, on the bank of the Upper Pond, there is a green alley – Władysław Srzednicki. Among the plants, you can find intimate places to rest and an outdoor gym covered with membranes. On the shore of the pond there is a wooden observation deck and a picnic clearing. Walking along Nowy Świat Street brings you to the Municipal Park of Charles August Dittrich that was established at the end of 19th century in a naturalistic style with a water system and numerous bridges. The place was a resting spot for the factory elite. Surrounded by green parkland, there is an elegant villa of one of the owners of Karol Dittrich’s factory.