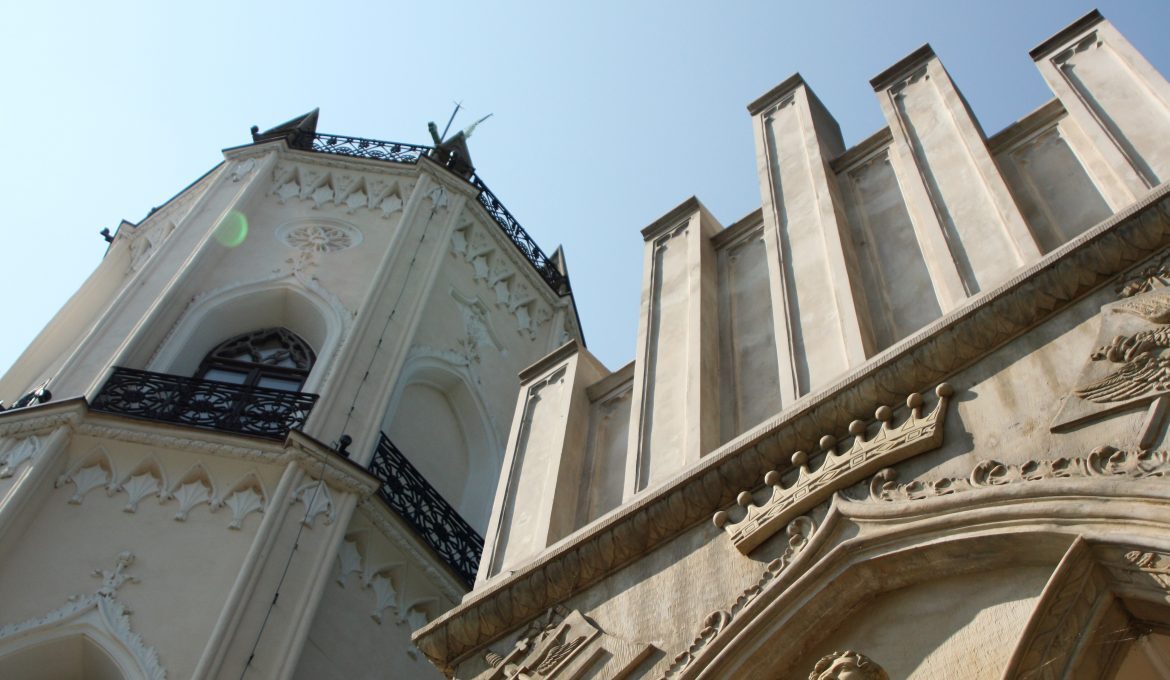 photo: Museum of Romanticism in Opinogóra

Only at first glance, Mazovia seems a gentle and calm place. Passions swarm under the appearance of peace and old castles, palaces and manors could tell many romantic stores including dramatic and cruel ones. The most terrible ones inspired even Shakespeare himself!

Romantic, melodramatic and shocking stories are linked to specific places. Apart from fantastic stories and thrills, you can find your own feelings and hopes for safe future.

The first stronghold in Ciechanów was built on the Farska Góra, where there is a beautiful neo-Gothic belfry today.  According to the legend, the castle was founded by the knight Ciechan, who came here with his beloved wife, the beautiful Dobroniega. Their relationship caused the knight to be banished from his family and Ciechan was against his father’s will to marry a neighbor. The knight chose love, beauty and a place for his new home. It is said that it happened in pagan times, and the Farska Górka is supposed to come from the name of the Slavic god Swarożyc.

The church of the Visitation of the Blessed Virgin Mary in Ciechanów is another architectural evidence of marital love and it was founded by the marriage of Masovian princes Siemowit III and Eufemia.

Ostrów Mazowiecka: A bishop and a wonderful princess

The victory of the Battle of Grunwald had to be worked with complicated and multi-stage diplomatic efforts. One of the most important goals at the end of the 14th century was to reconcile the quarreling cousins King Władysław Jagiełło of Poland with the Grand Duke of Lithuania Vytautas. At the request of Jagiełło, the youngest son of Siemowit III, the Duke of Mazovia, Henryk, the Bishop of Płock, was sent to deal with the delicate family mission. The clerical person turned out to be such and good negotiator that he supposedly arranged a meeting between Witold and Władysław at the hunting manor of the Masovian dukes in Ostrów Mazowiecka. It was not only Prince Witold who could not resist the persuasion of Bishop Henry, but also the sister of prince of Lithuania Ryngałła, known as the wonderful one, fell in love with the charming negotiator who resigned from the bishopric for her and abandoned the clergy.  However, he did not enjoy long marital happiness and he died a year after getting married. People who were unfriendly to the princess were whispering behind her back that she was a poisoner and that she had this death on her conscience…

Today, in the place of the former hunting manor in Ostrów Mazowiecka, there is a Jordan Garden for children, where you can admire the reconstruction of the castle of the Dukes of Masovia.

There is another romance story to learn about in Ostołęka.

The inhabitants of the Duchy of Mazovia believed that it could not be a natural death. Could it be that the last two dukes of Mazovia, Stanisław and Janus III, died childless two years apart? Both were young and healthy and they both had to deal with the treacherous Katarzyna Radziejowska from Radziejowice, the daughter of the castellan of Sochaczew!

She was the one to have an affair with Stanisław, who had even promised her marriage, but under the persuasion of his mother, Duchess Anna, he withdrew the word. Shortly thereafter, in 1522 Princess Anna died. She is meant to be the first victim of revenge for the scorned heiress of Radziejowice. In 1524, prince Stanisław left the earthly pit, right after the feast, during which he ate a roasted capon, covered with vinegar from Malmasia, sent by Katarzyna. After the next two years, Prince Janusz III unexpectedly died and he was to have an affair with Katarzyna before his brother’s death, and after the mysterious death of Stanisław, he broke off contacts with the accused murder. Professionals might start to hypothesize about a two year serial killer cycle, but official forensics conducted by the royal doctors after Katarzyna was charged with the murders, excluded the use of poison. However, the bad fame remained, and the centuries – old story of the Radziejowice family is hidden in a neo-Gothic castle in Radziejowice in the place of a 15th century manor. This is something for lovers of the thrill. Also lovers of idyll will find peace in the vicinity of a classicist palace situated picturesquely by a pond in the same property.

Otwock Wielki also has its love stories, not less spicy:

Apparently, on cloudy spring and autumn night, a mysterious airy female figure wanders around the galleries and the courtyard of the Szydłowiec castle.

According to the legend, it is the spirit of Elżbieta Radziwiłłówna, who fell in love with a poor nobleman and set off, at the suggestion of devil to meet her beloved. But as she passed through an underground tunnel from the castle to a nearby church, the flying bats scared her so much that she died of fear. Today her lost soul wanders around the Szydłowiec castle, lonely and longing for her lost love.

Justyna Krzyżanowska was the daughter of the property manager of Count Skarbek, and when she grew up, she helped to manage their house in Żelazowa Wola. It was probably here that she met Mikołaj Chopin, a French tutor, the love of her life, and a father of the greatest musical geniuses of all time. The Birthplace of Fryderyk Chopin in Żelazowa Wola is the birthplace of not only the most outstanding Polish romantic artist, but also a Polish composer who had the greatest impact on the sensitivity of several generations of people around the world.

Sanniki: close to a scandal

It was going to be a great scandal when the young Fryderyk Chopin, who spent the summer holiday in Sanniki with his family’s friends, the Pruszak family, was accused of seducing the governess and making her pregnant! Fortunately, the matter was cleared up in favor of the musical man, who eventually became the godfather of the illegitimate child. In memory of the purely platonic contacts of Fryderyk and the governess there is a sculpture with a listening virgin and an inspired bachelor.

Opinogóra: a bench of lovers

When asked about romantic places in Mazovia, Opinogóra is the first that comes to mind. Not only because the former Krasiński estate, the center of which is a neo-Gothic palace, houses the Museum of Romanticism, but also Zygmunt Krasiński wrote here his poetry.

From the point of view of a person who dreams of great affection, the most valuable object is a magic bench that attracts love to everyone who sits on it. The marble bench was commissioned by the first love of the romantic bard, Amelia Załuska and had the inscription engraved on it: „May my memory always be pleasant to you”. Is it really possible to attract love by sitting on the bench? No guarantees are issued, but just try.

Szydłowiec: a sculpture that gives happiness in love

A must see in Szydłowiec is the 15th century parish church of St. Sigismunt. The legend says that whoever touches the marble woman sleeping in the temple, will be lucky in love. This extraordinary woman is Maria Radziwiłł, nee Gawdzicka, the wife of one the last counts in Szydłowiec, Mikołaj Radziwiłł. Maria did not come from an aristocratic family, she was the daughter of a chef and a sister of the parish priest in Szydłowiec. Therefore, the love of the prince and beautiful Maria had to overcome many obstacles. The prince’s mother, Anna Luiza Radziwiłł, was the most opposed to their marriage, therefore the wedding of Mikołaj and Maria took place only after the death of the duchess.

A beautiful tombstone, made by the outstanding Italian sculptor Giacomo Monaldi, the court artist of King Stanisław August, was founded by Maria’s bother, priest of Szydłowiec, father Józef Gawdzicki, and the heroes of this romantic story are said to be the prototype of the main characters in Helena Mniszkówna’s novel „Trędowata”.

Where is the announced inspiration for Shakespeare?

The icing on the romantic and romance Masovian cake is the story coming from Rawa Mazowiecka, that is historically connected with the dukes of Mazovia.

One of them, Siemowit III, probably founded the Gothic castle in Rawa Mazowiecka, Today, only the octagonal tower from 14th century remains of the building, remembering the terrible crime of the Masovian ruler. It was here that the prince, maddened with envy, had his beautiful wife, younger than 23 years, locked up when he found out that she was pregnant. When she gave birth to a son, he ordered her to be strangled and the child to be brought up by a peasant family in the area and when the boy grew up, he appeared to be so like his father. Siemowit III recognized Henryk and made him the bishop of Płock, and the whole story was described in his chronicle by Janko of Czarnków. It was a tragic plot with a happy ending that probably inspired the Stratford master to write the „Winter’s Tale”.