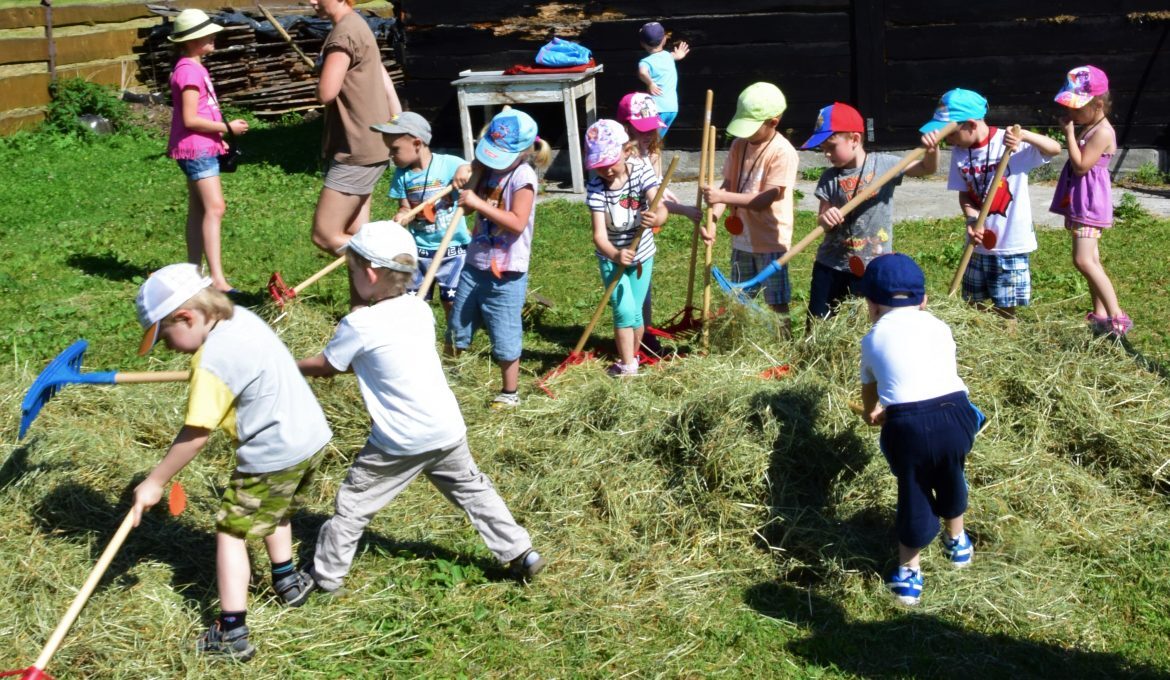 After many years of working in the international corporations, Mariola who is currently running “Julianówka”, and her husband have decided to completely change their way of life. They decided to use their beloved place on earth, where for years they have regularly rested from the hustle and bustle of the big city. It was a recreational plot located on a meadow surrounded by forests of the Mińsk Protected Landscape Area by the Chain Mountains. Bearing in mind their childhood and holidays spent in the countryside with their grandparents, they decided to recreate the rural atmosphere both in the nature of the facility itself and in the program offered. It all started with tidying up the area and clearing the bushes. Later stages were created: place for barbecue, playground for children,  bonfire place, animal sheds in a mini zoo – goats and ponies.

Unfortunately, after her husband’s death Mariola had to take over all the duties, not wanting to waste the efforts and resources invested in the present Julianówka. She launched an offer of one-day stays for organized kindergarten and school groups. After that, special events began at the Biesiadna Polana. Another investment was the construction of a barn transported from Jeruzal, (filmed as Wilkowyje in the “Ranczo” series), so that her guests can spend time in the building when weather is bad. The idea was very good  – Stodoła Babci Julci was decorated as a country cottage. There was also hay sleeping in the barn for brave guests. Seeing the interest in accommodation, Mariola decided to  build four wooden houses. It was then that it joined the National Network of Educational Farms. She has received honors and prizes. Seasonal Stodoła Babci Julci has turned into a year-round Chata Babci Julci. The playground has gained new elements. There are bushes, fruit trees, beds with vegetables, herbs and flowers in the area.

Among the first pre-school groups, there was a group from  Ursynów in Warsaw. Everyone was so delighted – children were happy and the teachers also satisfied with the educational program that the management of  the kindergarten decided to make the visits of five-year-olds to Julianówka a kindergarten tradition, and it is so until today.

The next projects were weekend stays of young fathers with children. They were for friends taking their children aged 1 + to Julianówka without their partners, while they were having time for themselves. An interesting thing to notice was that fathers help each other in taking care of children by exchanging responsibilities. In the evenings, when children are asleep, adults organize time for themselves – a bonfire, baking sausages and night talks. There were also various musical groups in Julianówka. The group of choir conductors from all over Europe was remembered, as they spent several days preparing for the performance in Mińsk Mazowiecki.  They were to create a choir and said goodbye with a song performed acapella, promising to return.

The nearest town is Mińsk Mazowiecki, with a lot of monuments worth seeing including: palace complex of Dernałowicz from the 17th, 19th  and 20th centuries, the Church of the Nativity of the Blessed Virgin Mary from the 17th century and the Jewish cemetery from 1890. You can also visit Mińsk Land Museum and its branch dedicated to the 7th Regiment of Lublin Lancers.

The Konstanty Laszczka Museum with a rich collection of the sculptor’s works is located in Dobre.

You cannot miss Mrozy with horse-drawn railway, running in summer, Cegłów with the altar of Lazarus, a student of Wit Stwosz, and the village of Jeruzal, where the series “Rancho” with an unforgettable bench by the shop was filmed. You can still buy Mamrot wine there.

Among the natural attractions are Góry Łańcuchowe, the only mountains in Mazovia and fir forests in the Cegłów commune, where air is extremely clean.

There are many interesting facts from the vicinity of Julianów and about people associated with them. For example, Jan Himmilsbach was born and raised in Mińsk Mazowiecki, Stefan Żeromski used to come to Nowomińsk, as his name was Mińsk Mazowiecki at that time, to Helena Radziszewska nee Zeithheim, wife of the head of the local railway station. The romance of these two lasted 6 years, and the writer decided to create the figure of Helena from “Popioły” in the image of his beloved.

It is also worth noting that there used to be an envelope with a pattern of correct addressing on mailboxes all over Poland “Obywatel Jan Nowak. ul. Cicha 52 m. 24. 05- 300 Mińsk Mazowiecki”. Legend says that the then Minister of Post and Telegraph was a native of Mińsk, and he chose Mińsk Mazowiecki when establishing an exemplary address to be advertised.

Most interesting events take place in Mińsk Mazowiecki. The partying season begins in May, when the town celebrates the anniversary of the city foundation. In June, there is the 4M Festival, Mińsk Mazowiecki City of Music. Also in May or early June, “Dzień Otwartych Koszarów” and air show are held at the 23 Tactical Air Base in Janów near Mińsk. September is the time of the Himilsbach Festival in Mińsk,

The Sójka Mazowiecka Festival takes place every year in Cegłów, the main theme of which is a traditional dish of that name, prepared by housewives from Cegłów.  And in August, municipal and parish harvest festivals take place in the entire area, when you can try local delicacies and watch performances of local folk bands.

Julianówka also has its own event offer. On pre – holiday weekends –  two weeks before Christmas and Ester family workshops are organized on preparation of Christmas decorations and Easter palms / eggs. The first weekend of June is Mother’s and Child’s Day with attractions for mothers and their children.

In autumn there are evenings with board games, St. Andrew’s Day, Mikołajki and in winter New Year’s Eve Ball, and if snowing – sleigh rides with a bonfire. Delicious lunches are served every weekend at Chata Babci Julci.

The program of events includes, among others, recreational, sports and fitness activities, cultural attractions under the Masovian Cloud and many others.

Educational and recreational activities for secondary school students include, among others, learning: polonaise, “Savoir – vivre, czyli jak obycie umila życie”, organization of outdoor events. Those willing can take advantage of the canoeing trips down Świder River.

The students of the University of the Third Age, who come to Julianówka for workshops and recreational events, are also happy with the farm’s offer.

The strong advantage of the place is tasty cuisine. The dishes served took the name of “grandma’s flavors’ ‘. Homemade dishes dominate. The kitchen uses many rural, organic products, vegetables and fruit, including some from the garden. Other victuals, such as cheese and cottage cheese, come from local farmers.

The most popular dishes of guests are all kinds of dumplings and pancakes. Cold cults, homemade lard, are also on the list of Julianówka delicacies.

Chata Babci Julci is equipped with old, antique trunks obtained from a farmhouse, a characteristic cupboard from the mid 20th century – very popular at the time. The cradle was used for nine children of the folk artist, who runs the weaving workshop. Often, reels are used for decoration, straight from the Masovian looms. There are still many details here, which together create a typical countryside style.

The Julianówka’s team is not formally a family, but feels like family and creates a family atmosphere at work.

Matiola, the owner, the boss with a head full of dreams and ideas, tries to keep everything under control, that is not always easy.

Jan, a friend of the boss, handyman, pedantic hard worker, lover of plants and animals, he does repairs, takes care of animals and vegetables, herbal and flower garden.

Ala coordinates customer service, on the first line – by phone in contacts with customers, making sure that guests have well -planned events and stays, that they leave happy and return.

Natalka promotes Julianówka on social media. She is happy to look after the youngest who come for kindergarten, school trips or simply with their parents. Quiet, nice girl with the face of an angel.

Crazy cook Katarzyna manages the kitchen and the hall in Grandma Julcia cottage.

Jasia, quiet and calm, helps with Kasia’s tasks the more sedate got the nickname “mother- in-law”. Look for a duo lika Kasia and Jasia with a candle, and what comes out of their hands on the tables deserves the term “lick your fingers”.