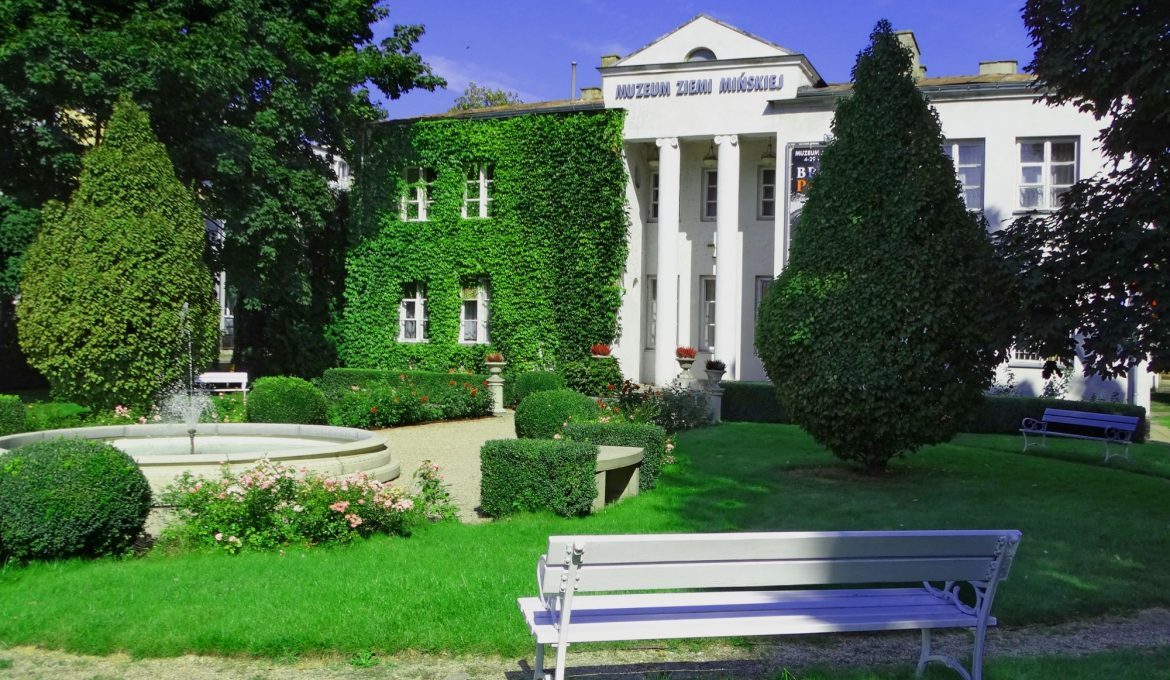 Museum of the Minsk region

Your adventure with this place should start with a visit to the Mińsk Land Museum. This is not an ordinary institution where you wander without a plan. Here you can immerse yourself in the lives of people who used to live in Mińsk, and before that in Mensk or Miensk.

It is very easy to get from the station to the Mińsk Land Museum. All you have to do is to go straight from the underpass, which welcomes visitors with independence and railway murals, go out to Kościuszki Street and go straight as far as Okrzei, turn left, pass the District Courtand find Okrzei 16.

The story of the city’s history has nothing to do with the boring listening of dates, names of battles or other spectacular events. It is an immersion in everyday life, which was captured in this extraordinary house like an insect in amber.

Because this is where you should start – the Mińsk Region Museum is really a home, or more precisely: a villa (or even 0 if you prefer the term – a palace) built in the 1930s for Cuntess Pelagia Łubieńska. The building was made of materials recovered after World War I from…but this will certainly be explained by the host of this place, because like every home – countedd Łubieńska villa also has a host – a guide who shows the guests around the room, where there are permanent and temporary exhibitions.

On the ground floor, you can learn about the history of Mińsk: see the coat of arms gallery of the families associated with the place, an old map showing the development of the village on the Srebrna River. A large part of one of the walls is occupied by the family tree of Jan Gościańczyc, thanks to which Mińsk was granted location right and whose monument was erected in the Old Market Square on the occasion of the 600th anniversary of obtaining city rights (unveiling on May 29, 2021).

VISITING THE WATCHMAKER AND TEACHERS

The first floor of the villa was added after World War II. There are two exhibitions that will take you back in time. The first is Lucjan Dąbrowski’s reconstruction watchmaker’s workshop – with his tools and inventions, handmade furniture and a secret passage to  private rooms. Here, too, the host does not let the guests loose, but explains with passion how Master Lucjan organized his workshop, how important he was in the city, because he not only repaired and made watches, but for example dealt with mail order, acting like today’s auction portal, he was also engaged in social activities. You can also find out why at some point he had to paintover the word JU

In the second section on the first floor there is the apartment of a couple of pre-war teachers – Janina and Józef Sylwestrowicz. The exhibition is entitled: “How did teachers live in the Second Polish Republic?”, but even it does not reflect the experience of visiting the place. Flowers and fruit are on the table in the living room, in one of the rooms the radio is on, pre-war broadcasts are broadcasted, in the kitchen the pasta is being dried on the table. It is a bit silly to look into wardrobes and drawers when the residents are not at home, you can see that they only left for a moment. A military uniform from the 1920s on a hanger, in a maggi kitchen cupboard, and on a bathroom shelf, talcum powder and Nivea cream. It is enough to light the kitchen stove to make it family and even more cozy.

It is an impression of celebrating a completely ordinary everyday life, and at the same time a surprising slowdown of the pace moves out from here and continues through the streets of Mińsk Mazowiecki. Just before leaving, a glance at the large post – German aerial photos of the city and hints on how to get to Kiliński Square, and then to the park and which way to go to see as many one – story and two – story wooden houses as possible, especially the one with a turret.

THE SPELL OF LOW BUILDING

A walk is a good way to get to know Mińsk Mazowiecki. Better than a car that quickly gets stuck in a traffic jam on narrow streets, or a bicycle, because the paths are a cure, but parking space, and therefore also cars blocking the passage of two – wheeled vehicles, a whole lot. But it is worth moving not too fast to catch the specific atmosphere, because here time seems to slow down. On the way, you can sit on one of the many benches place in the streets, or have a coffee in a confectionery, you can look at the fountain and islet on the Srebrna backwaters in the beautiful Dernałowicz Park, and then walks around the classicist palace, which today houses the Municipal House of Culture. Then look at the Old Market Square and Sanctuary of Our Lady of Haller, and then return along the Silver Boulevard towards the tracks, go the other side and visit one more unusual place – the Museum of the VII Regiment of Lublin Uhlans,, also located in the villa, but belonging to once to doctor Jan Hubert.

The special climate of Mińsk Mazowiecki, despite the crowds on the main streets and traffic jams at rush hours, may result from relatively low buildings. Hardly any building is higher than the 4th floor, most of them including new block and apartment building, have 2-3 storeys, and between modern building, blocks from the communist era, low tenement houses from the first half of the 20th century and classicist building, they still stick to their places Wooden houses firmly embedded in the ground, most of them one – story, in a very different condition, form glossy polished up to crumbling ruins. They stand on the main streets and in the back of courtyards, sometimes surrounded by modern buildings, and in side streets in series. In May you can see how many of them nestel in lilac bushes. Every year there are fewer of them – this year alone, at least two have disappeared. Some of them decay with old age, decay unused, others disappear in fires, and modern buildings appear in their place.

From 28 to 30 May, the city of Mińsk Mazowiecki will celebrate its 600th anniversary. During this time, it will receive three new objects worth seeing: the statue of the knight Jan of Gośiańczyce on horseback (Old Market Square), the 600th anniversary mural (8 Konstytucji 3 maja) and the statue of Piotr Skrzynecki in front of the Municipal Art School.