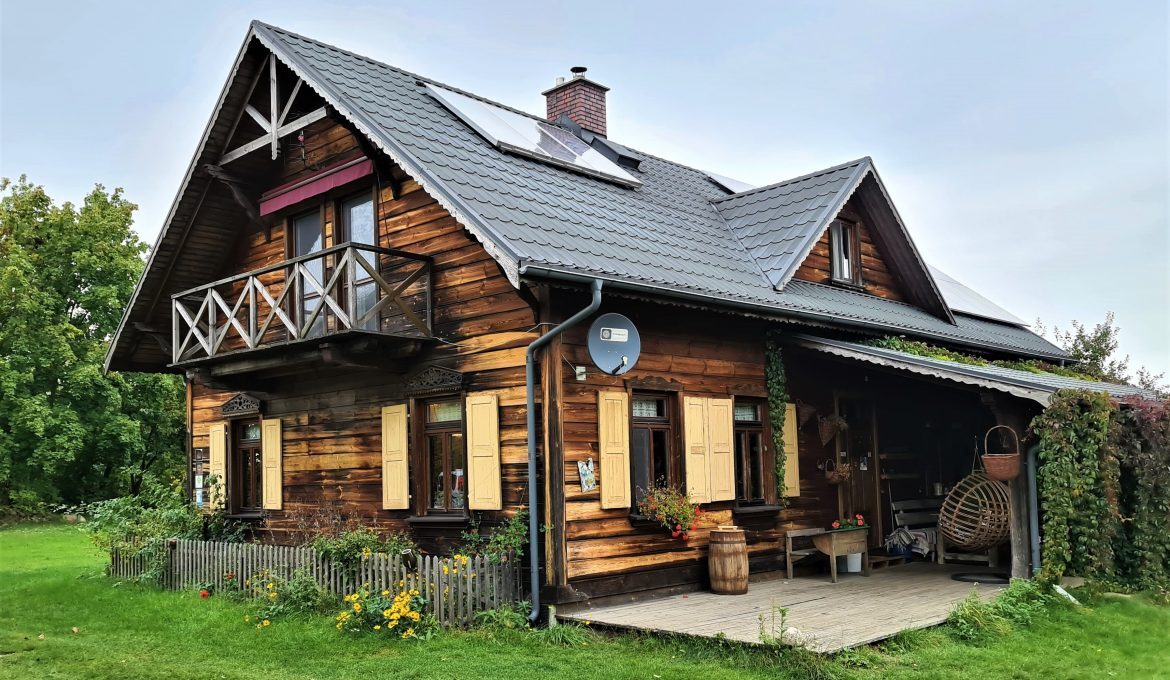 Barbara’s move from the capital to the countryside was romantic. She imagined that after a period of exhausting professional life, a new time in the idyllic countryside would be an endless reward. Above all, there was to be coffee on the terrace, looking at the wonderful nature of the Bug. Relax with a book. It was supposed to be like this day after day. Life verified this notion, because Barbara needed people next to her. She wanted to establish relationships and share the charm of the place she chose for herself. For that to happen, the house had to be opened to guests. This is how the idea for agritourism was born. More ambitious – to ecotourism. Ecotourism was a new trend in tourism several years ago, so the choice of such a destination in the context of business success was promising. For Barbara, however, it was no less important that the ecological profile of the place attracted guests aware of its values. She wanted her effort to create a place with a high level of service to be respected so that the surrounding nature was treated with equal respect. Barbara says she was lucky that at the same time there was an opportunity to participate in projects financed by the Norwegian funds and implemented by the Social Ecological Institute in Warsaw, the aim of that was development of agro and ecotourism in the areas between the Bug and the Narew. Together with a group of enthusiasts, they have been training for over 3 years at the national and international level, gaining knowledge and experience. As a result of these activities, 10 years ago, the ecotourism network “Między Bugiem a Narwią”: was established in 13 communes, and then the first Polish Ecotourism Certificated was established in the country, the height requirements of that were met by 9 places participating in the project with “Dom nad Wierzbami” included.

Setting the bar high for herself, Barbara also expected her guests to follow her as well. For her attitude to nature, pace and lifestyle. And it really is. For 11 years, it welcomed both families with children and adults who came without children. She often said that she first hosted singles, then couples, then crunches, and then….babies. In 2019, she decided to change the profile of the facility to “adult asylum”. Thus, she reacted to the needs of the guests to separate into the groups so that everyone could have the best possible rest. In practice, children stay at home with their grandparents, aunts, and parents catch their breath from work and children.

Barbara likes to host seniors, who during their stay, are eager to establish relationships with much younger people, who are the main group of local visitors. Then she likes watching how the vibrant life at home, laughter, long conversations at the table and on the evening terrace stimulate their energy and sense of humor. Mr. Edmund was an unforgettable resident years ago. For 5 years, he divided his summer vacation into two parts: he spent two weeks in his apartment, where he felt very lonely after his wife’s death, and weeks at the “Dom nad wierzbami”. He reluctantly cheated on his extended family, where he disappears in summer. It caused a funny situation when one day the lady whom Basia had greeted in the years came and she was walking towards the house and said that now there are not many guests, only one elderly gentleman, a regular visitor. Upon entering the house, it turned out that Mr. Edmund was the visiting lady’s uncle.

“Dom nad Wierzbami ” is sometimes chosen by guests as the place of important life decisions and events. More than one couple got engaged on a yellow boat in the pool or on the pier. Two pairs of befriended guests even married here – one in the habitat on the very backwaters on the Bug, the other in a nearby historic church. The important inhabitants of  the house are 4 cats and a dog called Synek, all very friendly to people. Simply put – terrible hugs. The animals are members of the community and are also treated as such by guests.

Often, guests coming for the first time ask where it is best to go for a walk. There is one answer to this: whatever direction you go, you will not be disappointed. It is captivatingly beautiful everywhere. What about other seasons that summer? Same beautiful, only the colors are different.

Jackowo Dolne, where the house is located, is on the edge of Kurpie Białe. The cultural influences of the Kurpie region can still be heard in speech, and can be seen in the customs and remnants of old architecture. In Pniewo, 15 km away, you can visit the Regional Chamber called Kuźnia Kurpiowska, where old everyday objects, furniture and exhibits of folk art are collected. Artistic handicraft workshops are held here, and once a year also blacksmith competitions.

In the neighboring village of Barcice, there is a beautiful wooden church from 1758 with Baroque interior that can be seen during the Sunday mass. It is a top – class, zero – class monument. In summer, free catamarans run from nearby Popowo to Kuligów, located on the other side of the Bug, where the open – air museum is a great attraction. Thanks to this connection, the more active ones may be tempted to organize a bicycle trip around the Lake instead of the Lagoon.

The application form for an ecotourism certificate contains as many as 24 pages with over 100 requirements to be met! From the basics of caring for the environment, feeding guests with healthy, unprocessed food, to the natural décor of the rooms and….getting rid of asbestos from the roofs of the farm. Only a few hosts were able to meet these requirements.

There are three protected Natura 2000 areas in the area: Dolina Dolnego Bugu, Ostoja Nadbużańska and Puszcza Biała. The Little Biebrza is called by the naturalist Little Biebrza due to the number of bird species living here. And there are more and more of these since global warming, because they stay in this area all year round. Cranes did not fly south during the last warm winter. Every morning you could hear them whey they flew across the river to the fields where they were feeding, and in the evening whey they returned to spend the night in the marshes on the Bug.

The annual local harvest festival, held alternately in Somianka and Popowo Kościelne is a big attraction for tourists. The traditional date is mid – August.

Annual indulgences are also held in May in the historic church of St. Stanislaus in Barcice and in September at the Sanctuary of the Blessed Virgin Mary in Popowo Kościelne. However, the feast of firefighters and their patron St. Florian is on May 4. Volunteer Fire Brigade units throughout the commune including the closest Barcice Volunteer Department, organize festivals each year integrating the rural commune. They are a big attraction for tourists.

The offer of the facility includes accommodation in a very atmospheric old house. Double and triple rooms are decorated in harmony with the character of the historic building: looms woven on looms, hand- crocheted bedspreads, simple, comfortable beds. The whole house is dominated by paintings by artists from all over the world. This is the aftermath of open – air painting, which has a long tradition here. The rooms in the house do not have their own bathrooms. In 2014, the hosts built a new building, that they called the Gray House. It was created to provide guests with the opportunity to hold workshops and integrate in a larger space. The hall in the Gray House is used for yoga, photography, dance and painting workshops. On  the first floor of this building, there are 2 rooms with bathrooms for guests.

An attraction is the local cuisine, which stands out on the culinary map of Mazovia due to the quality of meals prepared from local products. Cheese, cold cuts, gourd curd, honey and vegetables come from the hosts’ friends. These fish are provided by anglers fishing in the Bug. Barbara bakes bread and cakes herself, processes vegetables and mushrooms for winter. And she always chews a large barrel of cabbage. She makes jams, liqueurs and ciders

from the wild fruti growing on the Bug bank. The hawthorn wine from fruit harvested on the banks of the river is famous among guests.

The culinary traditions of Kurpie are maintained here. You can eat dumplings with goat cheese and fenugreek, chicken broth, whitened fish soup, apple dumplings and fafernuchy for dessert. These dishes were placed on the list of traditional products of the Masovian Culinary Heritage Network. Barbara willingly shares recipes with guests during culinary workshops. Vegetarians and vegans will also not be disappointed and will find a menu for themselves. You can take advantage of the sauna and bath in a bathtub full of fragrant herbs. The bathtub stands over the pool and water in it is heated by a small fire. The meadows and reeds of the backwaters during the sauna are priceless. The farm operates in the rhythm of words that guests can indulge in by slowing down and calming down. There are several books in the garden with a hammock, a bench, secluded terraces and a pier. So there is a place to hide alone or in a small group of friends.

For more active guests, bicycles, kayaks and canoes are available. For children and adolescents, nature education classes on the basis of ecology are conducted.

Barbara created “Dom nad Wierzbami” out of love for people and the need to share her life with them. Previously, as a journalist dealing with social issues, she was close to people, and when she moved from the city to the countryside, she did not lose this need. By opening the door of the house to ecotourists, she invited them to the world of values. To the world of trust, openness, mindfulness, love for animals and nature. And the authenticity, compliance of what was written and said with reality.

With this approach to the activities conducted here with the hostess, the place is created by a team of three committed women. Barbara, together with Ula, Tunde and Ania, form the Republic of Women, favoring heavenly guests. And the attractions for them are taken care of by Barbara’s son Stanisław, designer and contractor of the Gray House, a beautiful sauna and a pier.