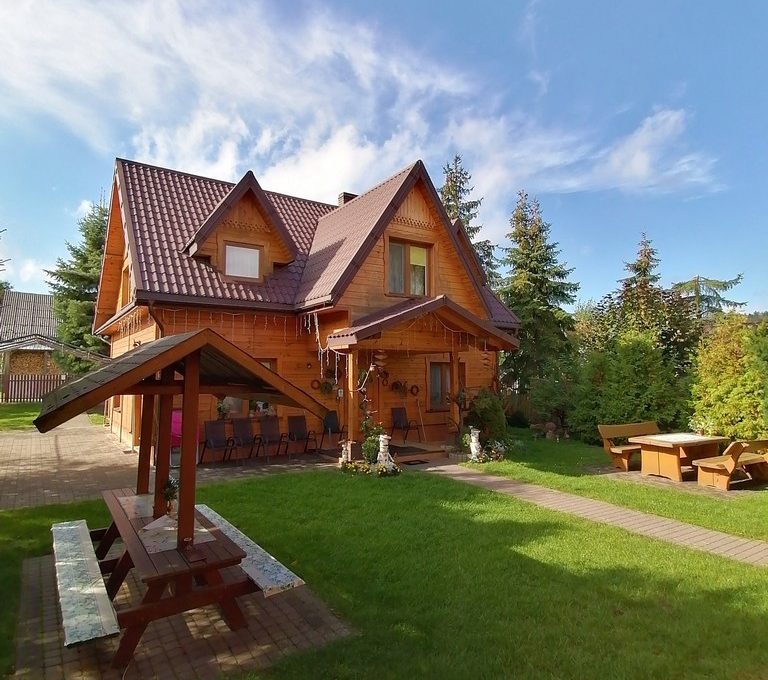 Grzegorz was born in Klepczew near the border triangle of the Masovian, Lublin and Podlasie voivodeships. In a picturesque village on the Bug river. His family – parents and two brothers brought up in the woods by a wild river, had love of nature from an early age. Finally, they wanted to share their passion with other people and  that is how Grzegorz’s mother, Józefa Bobińska, founded  the Agrotourism Farm by the Bug river.

Years later, Grzegorz decided to go with the times and introduce new products to the farm, allowing guests to enjoy the village life even more. This is how kayaks, steam boats and even a hovercraft appeared.

In 2011, Grzegorz met Ania who did not like big city life. She was emotionally close to the Bug River areas, especially liked forest paths that she discovered by bike. It was clear that his love would give birth to not only children, but also new ideas on how to share what is the most beautiful in the area. They both appreciated peace, relaxation, and detachments from the hustle and bustle of big cities. Working together with the older generation, watching preparation of traditional Polish meals, based on products of their own and neighborly farms, and the younger generation, who knew how to modernize the farm in order to preserve its spirit and at the same time offering guests the necessary attractions, resulted in the creation of a wonderful place.

During one of the cruises, accompanied by the Director of “Podlaski Przełom Bugu ” Landscape Park, a real guest appeared on the road – a huge moose! The animal entered the river to cross to the other side. The fact that the ship was cruising on the water and that it was quite close was no problem for the moose. At a crucial moment, the vessel was less than two meters from the animal. The captain slowed down by letting a swimmer of several hundred kilograms pass. by As if that was not enough, another animal appeared in  water during the same voyage. This time, to everyone’s greater surprise, the river was crossed by… a squirrel! Even the director was shocked to see this brave redhead. Certainly, everyone who has had the pleasure of watching this will remember it forever.

Some may be surprised, but the farmers’ favorite places are the meadows and pasture near the farm. The Bug River itself is a mainstay for them because of the peace, quiet and sounds of nature. Thanks to the marshy terrain in the meadows and cultivated fields, you can listen to the conversations of majestic cranes at sunrise. In the evenings, an amazing orchestra of local frogs gives concerts. Autumn days are  the time of returning. Those who have never heard the sound of deer crossing over often mistake it for the roar of a bear. It is wonderful to be able to sit down with your morning coffee or hot wine in the evening and listen to the sounds of Mother Nature.

Another favorite place is Kasztelik Korona Podlasia – a castle made of fieldstone that allows you to travel back in time. The combination of various construction elements: stone, cast iron railings and wooden elements creates an amazing place to rest and think about history.

On the other hand, the escarpment, located behind the village of Borsuki in Grojno, is on the most beautiful vantage point, allowing you to observe the meandering Bug. On the border of night and day, it is worth taking a thermos with hot coffee and admiring the views of the waking sun, emerging from behind the horizon illuminating the wide valley and the Mielnicka Forest visible on the distant hills. The mood is also created by the slightly rising mist above the water, creating a “cover” for the wild river.

Centuries ago, there was a fortified castle in Mielnik. The crew stationed there created a “gate” for evacuation in case of invasion, boring a tunnel under the Bug river, wide enough for a horse drawn to a wagon to pass through. Supposedly, a secret exit was in Zabuże. Years later, according to the locals, the tunnel was used by smugglers who smuggled goods into Belorus, but now the natives, when asked about the secret place, do not want to reveal the location.

In the place called Sarnaki, 15 kilometers from Klepaczewo, in 1944 the intelligence of the Home Army made a real discovery. From one of the proving grounds, the Germans started an experimental launch of unnamed V-2 missiles with a  range of about 250 kilometers and falling just in Sarnaki. A detachment of German soldiers stationed at the local school was to determine the hit points and seize the remains of the weapon. The Home Army intelligence found out about the experiments and transferred the information to London. The Home Army was ordered to find out the details of the mysterious weapon as precisely as possible. Thanks to the cooperation of courageous local people, it was possible to take over several misfires and debris that were transported by plane to London, where specialists decoded the weapons. In the vicinity of Sarnaki, pits after explosions have been preserved to this day, and the remains of V-2 rockets can be seen in the museum room of the elementary school.

The Nadbużański Cross is an event dedicated to jogging enthusiasts in order to promote the tourist values of the Bug Landscape Park. The route and its length change every year. Nordic walking hobbyists participate in the second run. The greatest advantages of the event are beautiful views and a varied area.

“500 kayaks” – this is the name of the recreational event that was first organized as a part of the celebration of the 500th anniversary of the Podlaskie Voivodeship in 2013.  The route is about 30 kilometers long and starts in Drohiczyn and ends in Granne. The event gathers canoeists from Poland, Belarus and Ukraine.

“Muzyczne dialogi” on the Bug River is a unique celebration aimed  at nationwide presentation of cultures, costumes and music of national minorities. Every year teams representing Belarus, Ukraine, Lithuania, Germany and the Czech Republic come here.

The offer of the farm has become wider over the years. Initially, it focused on accommodation and food. Currently, it also includes attractions for those who like to relax in a more active way. Guests have at their disposal a wooden, four – room house equipped with a separate kitchen and a large room for occasional events. The natural climate is preserved.

On the farm, you can take advantage of the offer of meals prepared after agreeing to the menu. The flagship culinary products of the farm are: herbal lard with apple, onion and herbs, pancakes made of lean cottage cheese, flour, sugar and soda, and potato cake based on potatoes, meat, onion and herbs. Vegetarian and vegetarian cuisine is available on request.

One of the most important advantages of Klepaczew is the location in the buffer zone of the Podlaski Przełom Bugu Landscape Park. It is an ideal base for canoe trips along the wildest Polish river. The farm offers the organization of canoeing events for companies, trips with friends and holidays with children. Tourists have at their disposal 21 double kayaks. The youngest have special kayak extra beds, thanks to which they can travel comfortably with their parents, admiring the surrounding nature. During the rafting trip, it is possible to go ashore, so you can eat outdoors. The farm also offers steamboat trips that were built by the owners with the help of friends. The current machine is the only ship of its kind in the area. It is distinguished by the rear wheel of the shovel drive. During the cruise, you can also listen to shanty music, try tasty food and enjoy beautiful views.

The hosts are proud of the large shelter located on the Bug river that can accommodate almost 50 people. Next to it, there are places for firebones:  with a large grate hanging over the fire and the other, smaller, a few meters from the shore. The areas at the shelter are also used for team building activities for large and small guests. On the way to the shelter, you can take advantage of attractions that are also the outcome of the work of the host!!! A 12- meter observation tower was built in the meadow. The descent is diversified by a 200 – meter long Tyrolean descent. Next to the house there is    a playground for children with a sandbox, trampoline, a small slide and swings.

The zoo is also a big attraction. Here you can see cats, miniature bunnies or see hens and quails. It is also possible to ride in a horse- drawn carriage or in a saddle. Bicycles are available on the farm, also with trailers for children.

The farm is run by the Bobiński family. What they have in common is their approach to people. It is not without reason that people from the East are said to be friendly, family-like, and even when they are missing themselves, they will not send the needy. Running an agritourism farm involves sharing with others. And not by force, but by heart. The Bobiński family wants as many people as possible to experience what they have: beauty, harmony with nature, silence, closeness to nature, experiencing moments together with the family and a lot of positive emotions.

Everyone has their responsibilities on the farm. The senior woman of the Józef family is an excellent cook. It is thanks to her that their agritourism farm has been awarded in numerous competitions, including the Master of Region Cuisine. She is in charge of meals, but also for work in the backyard garden.

The younger generation, i.e Anna and Grzegorz, offer additional attractions, such as kayaking, boat trips or team-building games. Contact with people is important for them, they establish direct, friendly relations with visitors. For them, running “Wypoczynek nad Bugiem’ is not only a job, but also a way to live a life full of satisfaction, adventure and sharing joy.