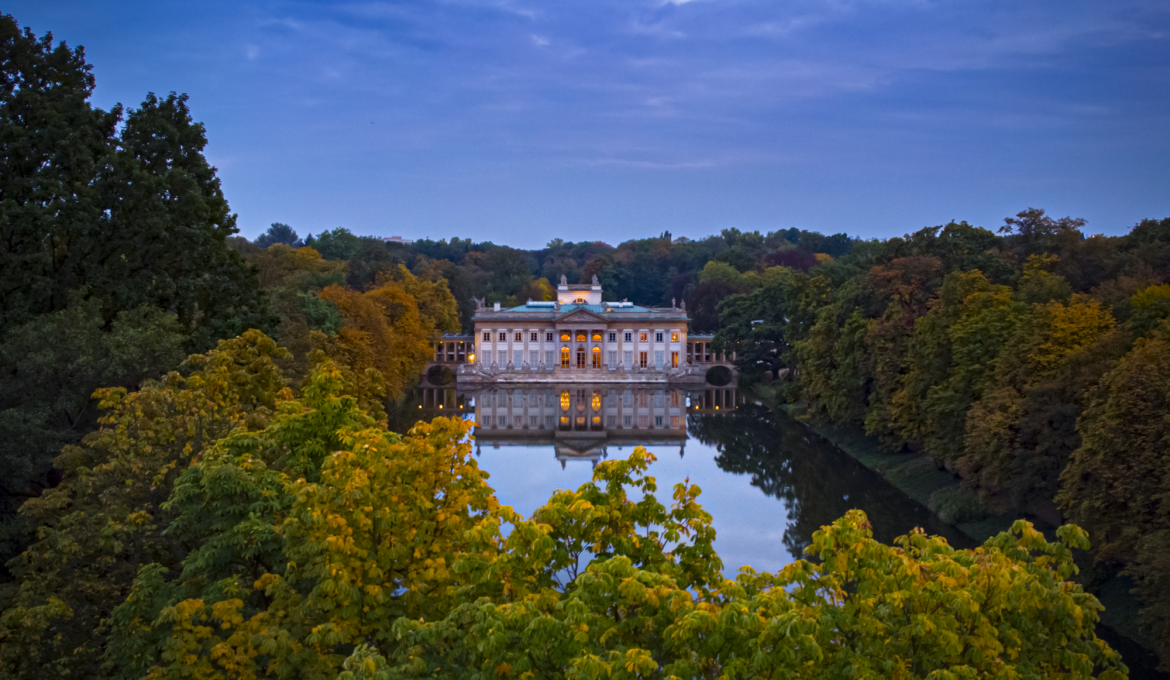 Łazienki Królewskie – a green oasis in the very center of Warsaw, hiding valuable monuments of architecture and culture, including the famous Palace on the Isle. The park is a popular place for walks, and in summer Chopin concerts are organized there, attracting lovers of classical music and more to the vicinity of the composer’s monument.

The name of the complex comes from the 17th century bathhouse of the Polish nobleman Stanisław Herakliusz Lubomirski, rebuilt in the 18th century into a palace. Earlier, in the Middle Ages, in the place of today’s Łazienki, there was a zoo that served as a hunting place for the Dukes of Mazovia.

Palace and other buildings

The central point of Łazienki is the classicist Palace on the Island – the summer residence of the last king of Poland, Stanisław August Poniatowski. The ruler gave the famous Thursday dinner there, to which he invited scholars and poets to discuss current events, education and culture. Today, the historic building houses a museum displaying paintings from the royal collections. A unique attraction is the possibility of a gondola ride on the pond surrounding the palace.

The neighboring open-air amphitheater refers in its architecture – in accordance with the trends in the Stanisławów era – to the ruins of Herculaneum and the Roman Forum. The amphitheater is a stone structure in the shape of a semicircle, which is connected to the stage by a water canal. In the 18the century, sea battles were organized here, to which nearly a thousand spectators were invited.

Parallel to the Palace on the Isle, other buildings in the Łazienki Park were built. The White House was built next to the Royal Promenade, a unique monument of 18th – century residential architecture with the Royal Gallery of Graphics and the first grotesques in Poland by Jan Bogumił Plersch and Jan Ścisła.

The Myślewicki Palace, which was the residence of the royal nephew, Prince Józef Poniatowski, is located in the eastern part of the park. The original polychromes by Jan Bogumił Plersch (including views of Italian cities – Rome and Venice) have been preserved in its interiors to this day. Designed by Dominiki Merloni and built on a horseshoe plan, the Old Orangery was used in the 18th century to store exotic trees that decorated the royal gardens in summer. In the past, it housed the Royal Theater, one of the few original court theaters in Europe, and the Royal Sculpture Gallery with plaster copies of the most famous sculptures of the ancient world. The New Orangery, on the other hand, was intended for the winter storage of exotic trees and its function has not changed to this day. In one part of the building there is a stylish restaurant „Belvedere”.

At the end of the walk around Łazienki, it is worth going to the former building of the Cantonist Barracks. Currently, it houses the Museum of Hunting and Horsemanship, where an exhibition dedicated to the history of hunting is presented.

Beautiful at any time of the year

There are also four gardens in Łazienki: Royal, Romantic, Modernist and Chinese. In summer, there is also a lounging area, located near the New Orangery. In winter, the park is worth visiting because of its illumination, which consists of several meters high, luminous figures in costumes from old eras, positioned along the Chinese Avenue.

For many people, the symbol of Łazienki is a monument depicting Fryderyk Chopin, located on the side of Al. Ujazdowskie. The composer is shown sitting, under a weeping willow tree with branches arranged in the shape of a hand. Every year in the summer, from May to September, every Sunday (at 12.00 and 16.00), the famous Chopin Concerts are held under it. Admission to the piano recitals is free. In the first year of the coronavirus pandemic, the practice of broadcasting concerts via the Internet was introduced for security reasons.

The park can be accessed through the western gates from Al. Ujazdowskie (at the Belvedere, Chopin Monument and the Tea Room), the northern gate (from Myśliwiecka street) or the southern gate (from Gagarina street). Admission to the Łazienki Park gardens is free.

There are free toilets in the park: behind the entrance gate from Al. Ujazdowskie (from the 26

Belweder Palace side), at the Old Orangery and at the Museum of Hunting and Horsemanship.

The current opening hours of the park and individual facilities, information on ticket prices, workshops, temporary exhibitions and special events can be found at: https://lazienki-krolewskie.pl/pl

The program of the „Chopin Concerts” is available on the website: http://koncerty-chopinowskie.pl

The nearest stations are at Na Rozdrożu Square and Unii Lubelskiej Square.

The nearest paid car parks are located at ul. Parkowa and at ul. Podchorążych