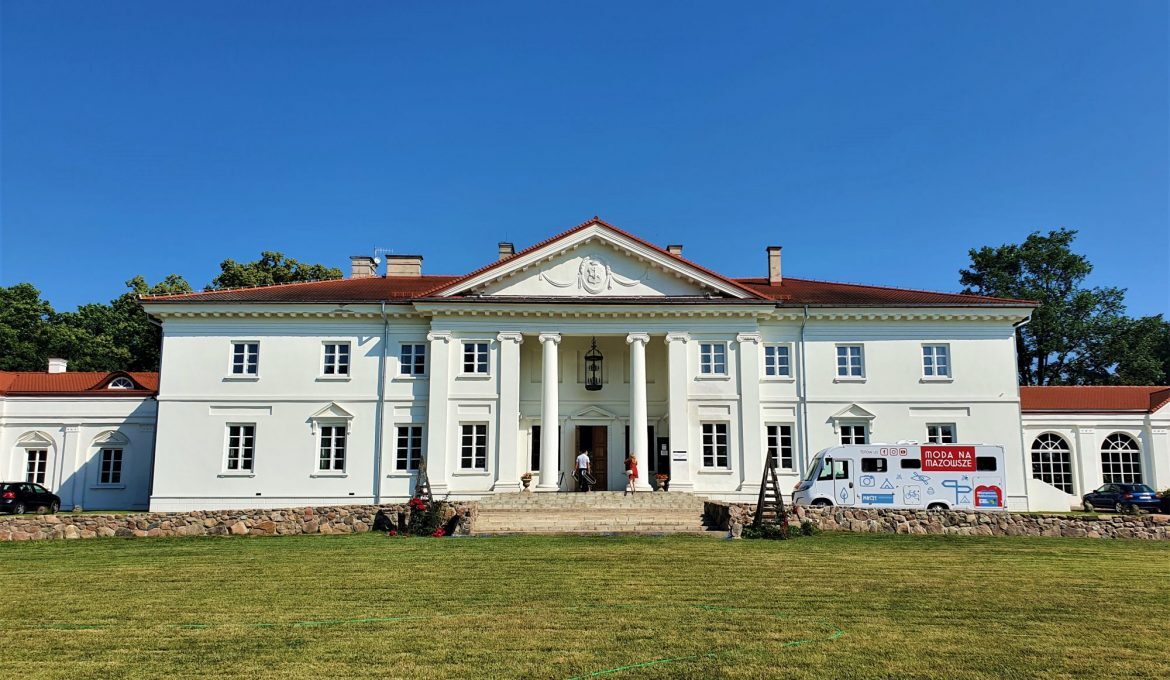 On the border of the two wildest landscape parks in the Masovian Voivodeship, in a village almost on the Bug River, a few kilometers from Drohiczyn, a property that has been called „Wilanów of Siedlce” for nearly three centuries is flourishing. However, here, unlike the palace in Warsaw, you can rent an overnight stay (in the Palace Forge), and even book a palace tower!

No wonder that the baroque palace, built in 1734 for the castellan of Podlasie, Wiktoryn Kuczyński, the owner of Korczewo and the future chamberlain of King Stanisław August Poniatowski, gained such a flattering name. It was designed by the Italian architect Konceni Boni, who at that time worked mainly for the Radziwiłł family.

Wiktoryn’s great – grandson, Alexander, made many changes to the property.

He hired an architect, Franciszek Jaszczołd, who worked in the neo – gothic style. Jaszczołd designed the orangery (today’s chapel), the well of St. Jana Siberia, where Joanna Kuczyńska, Alexander’s wife, lived after her husband’s death.

The aforementioned Joanna Kuczyńska is the title Lady in Korczewo from a poem by Cyprian Kamil Norwid. Kuczyńska’s correspondence friendship with the poet was so close that she asked the poet for advice on….her daughter’s marriage. Tadeusz Ostowski became Ludwika’s choice, and their descendants today own the entire property. They regained the palace and park complex in a disastrous state (here you can see photos of the ruin from 1979). In the times of the Polish People’s Republic, it housed, among others, a shoe shop, and in the ballroom…..fertilizers were stored.

Step by step and year by year, since 1989, the Ostrowski family has restored their former splendor to other buildings. The story of this battle is told by Countess Beata Ostorowska – Harris, president of the „Pałac Korczewo” foundation.

The palace can be visited and visited, it is open daily from Monday to Sunday from 9.00 to 19.00.

We invite everyone to Korczew: cyclists, families with children, history enthusiasts and Podlasie lovers. You can visit the palace, walk to the park, ride a bike to Drohiczyn, and then eat and sleep in the Palace Forge or the Baszta Apartment. If you want to stay here longer (and it’s worth it!), we have prepared a local guide for you.

In the Kuźnia Pałacowa restaurant, dishes are prepared from regional products and according to local recipes. Kartacze with meat and garnish available almost every day, as well as croquettes with spinach and feta cheese with garlic sauce are a hit. Home cooking is the dominant one, because that is what Korczewo’s guests like.

In Kuźnia Pałacowa, you can organize an intimate family celebration for up to 26 people or a wedding for 300 guests in the Wedding Hall. But most of all, the property is situated in an amazing location, almost on the Bug River, between two wonderful landscape parks. This is the edge of the Masovian Voivodeship, and historically Podlasie is in full swing. You can feel them in Korczewo with all your senses.

parking for motorhomes available at the facility: YES

Photos from the #KamperemPoMazowsze campaign are aimed at promoting the tourist attractions of the region, however, some shots were taken in places that are inaccessible to motorhomes on a daily basis.